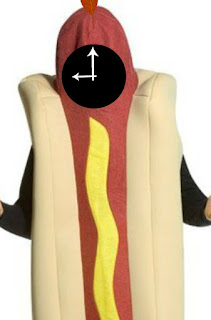 Claus began his 9:00 shift at 7-11 wearing the giant hot dog suit and standing on the corner of West Sixth Street and South Alexandria Avenue in Korea Town.  He was hot and miserable, able to smell Kendall’s foul body odor and unable to scratch places that itched.

He hated wearing the costume, not only because of its shameful appearance, but also because it was a haven for germs and parasites.  While most hot dog suits were embarrassing enough: the bun wrapped around the wiener with a mustard squiggle down the middle; this one was even worse.  The hot dog portion had a hood with an opening for his face to stick out- it clung to his cheeks.  A twisted beanie top crowned the whole outfit, meant to mimic the end of a sausage casing.  Claus stood on the corner with a handful of fliers that advertised specials of Pepsi 12-packs with a coupon for dollar hot dogs. At 10:00 he could take it off and go inside- one more hour and he was free.

Since Claus was naturally stocky, the costume fit him snugly.  He was forced to share the dreadful thing with five other employees who the owner called “young and adventurous” trying to encourage them in the midst of humiliation. Claus was indeed young; he was even adventurous in most ways, but not with hygienic cleanliness.  The other 7-11 employees who shared the costume didn’t seem to be as fastidious, Claus noticed.  Kendall was the worst: a tall, thick-waisted girl with three moles above her left eyebrow and a terrible stench that stayed behind when she left.

Although Claus and Kendall had never really spoken, he considered her an unpleasant person that he did not want to know.  When he was forced to work alongside of her he did all of the physical jobs.  She sat behind the counter on her fat ass, chewing her gum noisily and staring out the window.

Instead of mopping or cleaning up around the coffee area, which were the easy jobs, she would organize the hanging .  He hated working the shift after her, mainly because the bathroom cleanup was a terrible job after eight hours of neglect.  She didn’t even bother to read when it was slow; just chewed gum and looked out the window.  Claus had never seen her use a cell phone.

A car filled with teenagers stopped at the red light.  Claus smiled and waved at them, even though they were laughing and taking pictures of him with their cell phones.

“Man, I would NEVER do that job!” one of them yelled at him.  The other passengers roared with laughter.

Claus laughed and shouted back, “Never say NEVER!”
The people in the car were silent for a moment, then laughed.  As they pulled away they honked and waved.  Claus sighed.

“Yeah, everyone thinks the hot dog is a dork,” he whispered to himself.

Traffic was steady, but very few people were on foot.  Now and then the tin sound of a shopping cart could be heard in the distance; Claus looked around to see where it was coming from.

He remembered when his father lost his job three years ago.  He was fifteen years old; Shelley was thirteen.  Mom left two months later, with no explanation.  Claus’ father was devastated and drank a lot; it wasn’t until Claus was forced to buy his dad’s whiskey that he realized how much he consumed.  Before long, Dad had drunk nearly all of the severance check and Claus didn’t know what to do.  He considered running away, but it would have meant abandoning his sister.  Desperate, he called his Chemistry teacher, Miss Gill, at home.  She came to their apartment right away, assessed the situation, and explained to Claus that he and his sister would have to go to “somewhere safe”.  It didn’t take long to realize that this meant foster care; this was how Claus learned that his father was in the throes of pretty advanced alcoholism. Dad was taken to a hospital; Claus and Shelley were placed in emergency housing with a foster family.  If it weren’t for Miss Gill, they would have been separated.

Now Claus was determined to make a living that could sustain both of them; Shelley worked part time at Burger King as well, but she needed to graduate.  He was in community college, worked two jobs and was able to rent a small studio apartment for both of them.  All of it would get easier, he told himself, once he finished college.

“Hey, wiener!” He heard the voice of a bum, yelling at him from the sake house on the opposite corner.  Straining to see, Claus could make out the figure of a large-bellied man, leaning against his stolen cart.  The man looked familiar, was it Old Henry, the man that tried to steal the throw away dogs from the garbage?  It was hard to see in the half-light.

“Hello!” Claus waved a gloved hand.  The motion released the awful body odor smell.  He was repulsed, but quickly recovered – long enough to see the man shaking his head.

“Yeah, I heard you!” Claus knew the job was awful, but it paid well and it coordinated with his other job at the deli and school.  This way, he could rent the studio apartment for him and his sister. Pretty soon, he’d have to think about a scholarship application to UCLA.

“You know why I called you that?” The drunken man continued bellowing from across the street.  Where was a cop when you needed one?  More cars past, the whir of a city bus passed before him.  In one hour he could take off the costume and go inside to clean up the coffee stations.  That man was still yelling.  Why did his voice sound so familiar?

In a moment that stood still, Claus realized why the man looked and sounded familiar: it was his father.

There Claus stood, on the corner, in a hot dog suit – having this realization.  His father was pushing a shopping cart around Korea Town.  He was on the streets.  He was back to drinking, or he never got clean.  Shame filled him; it was worse than Kendall’s stench.

He started to yell something at him, but his father suddenly stopped.  It was as if he recognized his son at the same time the son recognized the father.  Silence filled the tension between them.  West Sixth was quiet.  It wasn’t until the ground beneath his feet crested in a wave, that Claus snapped out of it.

His father was a bum.  Was that an earthquake?
Posted by Brazen Princess at 12:28 AM