I just got off the phone with Mario, the love of my life, the man who normally reaches in to make things easier for me, when the world seems like it’s unravelling in my hands.  He is the best guy I’ve ever met, a man of exceptional capacity to care for others and make everyone around him feel safe and understood.  The world is a better place with him in it--and I celebrate him every chance I get.

Mario turns 65 today, which seems impossible, since we just got married last week (32 years ago) and our kids just graduated from high school (yesterday Joe turned 38). Didn’t we just get back from Africa? (Six years ago, we arrived home in Sacramento).  It’s easy to lose track of time when it flies by…and time does fly when you’re having fun.

Today I’m typing from a single bedroom in an AirBnB in Los Angeles—staying here while I attend the third residency for my MFA at Antioch University.  Five days into my residency, a time of stimulating and intense I’m exhausted and I miss him. Next to me is my purse, my book-bag and nothing else. I miss my husband, the one who validates me at every turn.  I miss the smell of his neck, the sound of him making coffee, the way he lays out his clothes for the next day.  I miss him.  I have to remember that sometimes marriage is tested by absence, and for some people, they have to endure separations for much longer than two weeks! When marriages are strong, love and respect keep the distance between us like a thread of music, continuing from another room.  When we’re reunited, we’re able to pick up where we left off.

Happy Birthday, Baby!  I love you so much!  I miss you so much it hurts!

Posted by Brazen Princess at 12:03 AM 2 comments

Last December, I was in line at Hobby Lobby, holding gifts for Joe's kids that I let them select for themselves. Our precocious grandson, Asher, heard a cashier at the register ask someone to bring her a set of Copic markers, kept under lock and key.

"I changed my mind!" Asher said, looking at me, wide-eyed. "I want Copic markers!"

I laughed. Copic markers are used by art professionals, familiar with intricacies of layering and blending.  They are also extremely expensive and we can't afford them.  I'm a traditional grandmother who wants to buy everything for my grandkids, but I tried to deflect the request.

Asher grimaced. I LOVE Asher's grimaces, almost as much as I love his smiles.

"I'm old enough," he said. "I know what you're thinking.  You think I'm not going to treat them well, and I won't know what to to with them, but I do."  The grimace fell into a sadness that made me put my arm on his shoulder.

"I know you're an artist," I said. "But I can't afford more than one Copic marker.  If you want one or two we might be able to afford it. But that's your Christmas gift. I think what you've chosen is better."

Asher looked up at me, then at his pre-purchased gift. "Alright, I'll take that," he said.  The look of defeat was all over his face. I knew better than to lecture him about being thankful--he was genuinely disappointed, and I didn't blame him. He looked up at me again. "One day, when you can afford it, can you buy me Copic markers?"

I nodded. "Yes, Asher. Because I know you'll take care of them and I know you are a serious artist."

He smiled at me and shrugged.  "You should have just said you couldn't afford them in the first place," he said. "Instead of saying I'm not old enough."

When we got to the cashier, I was so ready to be out of there.  I wanted to advise her not to say "Copic Markers" out loud while others are in line.  Instead, I smiled and looked down at Asher.  "One day, buddy, okay?"

"Yeah," he agreed. "Because I'm pretty good at drawing. You've never met another kid like me, right?"

I smiled. Asher remembered what I was saying earlier.  I told his parents that I never met anyone like Asher--he wasn't like other kids.

I met Asher when he was eighteen months old. Mario and I called him "the little man" because he was so grown up for a little kid. He was already speaking in complete sentences, even though he didn't speak them to me.  His whole world was wrapped up in his mother, Ariel, my daughter-in-law Lennae’s sister.  Ariel and Asher occupied one room of (our son) David and Lennae’s house, so when we would visit our kids and grandchildren, we would see Ariel and Asher. 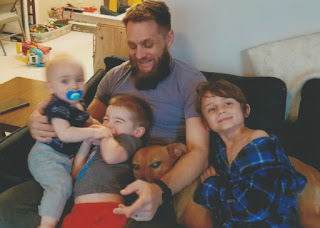 When our other son, Joe, visited David and Lennae, he got to know Ariel and Asher much better than we ever did. Soon, we noticed he was becoming pretty close with Ariel--a gorgeous, quiet woman that looked like a Renaissance painting.  When Joe and Ariel started dating, I wondered how it would affect the small, territorial little man in Ariel’s life.  After a brief warming up period, Joe and Asher got used to one another and began a relationship that looked like father and son.  A little while later, Harvey was born and the family blended quite nicely.

When you see Joe and Asher together, you see a unique closeness in their relationship, one that reminds me of how things are between Mario and Vince.  WhenMario and I started dating, Vince was 18 months old; when we married, Vince was two and a half.

The blessing of a blended family is that everyone in it has a heart that makes room for each other.  While not always ideal, the children learn that they have parents on all sides.  When it’s working properly, the child feels loved on all sides.  While not ideal, the blended family has a special beauty, with  members that can adapt to newcomers easier.  Ours is such a family, where we are scattered and different, but we all love each other.  Asher helps me remember that life is pretty sweet –if we make it that way. 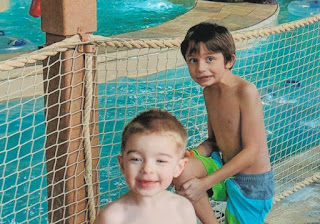 Happy Birthday, Asher!!  I have never met another kid like you and I am so grateful that we're family!!  Blessings and love today and always!  Abuela.