Harmony has lights in her eyes that sparkle, like fireworks.  She is filled with curiosity and loves adventure. 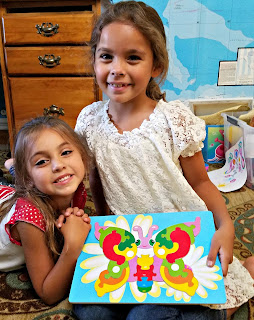 When she puts a puzzle together she concentrates with such intensity that she twists her mouth and purses her lips.  She glows with love asks me to cuddle with her as we read, which she does at a fourth grade level.

She is friends with every kid in her first grade class, even the awkward ones that have trouble fitting in.  She is tender and gentle, fiercely protective of her sister and her mother. 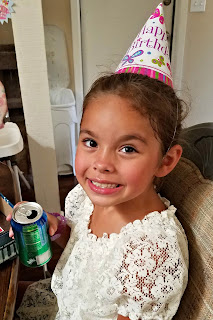 “She’s amazing,” her teacher told me two weeks ago.  “Her reading level is definitely advanced, but she enjoys helping her classmates, which is what makes her special.”

Harmony loves her school experience and looks forward to going every day.  She seems to delight in every portion, especially her friends. Daniel, her bestie from kindergarten, is always by her side when I come to pick her up on Fridays.

Because I am two hours away, our Fridays are spent at one of Chico’s picturesque parks, or its Gateway Science Museum, or visit an old fashioned Ice Cream Shoppe.

We shop at local toy and game stores that carry American-made toys and stuffed animals.  We go to the Library and look at new quilts hanging on display and then read a book or two.  Fridays with the girls are relaxed, sweet times.

Back at home, Harmony and I cook together.  She loves to cook, just like her Mama did at her age.

On Fridays, my world is filled with life.  I am grateful that I get to be engaged in this little person's life, someone who is joyful and loving.  How was I ever able to inherit such joy?  I love this girl so much… she is solid gold!

Happy Birthday, Harmony!  I am so proud of you!!
Posted by Brazen Princess at 11:20 PM 0 comments

When I fell in love with Mario, I fell hard.

Anyone who has a true love knows the day that you realize that it is real.  There is a lock-down in your heart and new language. "He's the one!  This is it!"  Mario was the most incredible man and I wanted more than anything to be his wife.

My parents had a beautiful marriage and I wanted one just like theirs.  I learned the tools from them: respect, tenderness, sacrifice, love, discipline, and oneness.  If you give of yourself, you can share your life and dreams with someone special.

As much as I thought I had it down, I never was able to make it work with anyone.  My first real try at a long-term relationship produced a beautiful baby, but proved to be otherwise fruitless.  Mario had also been married before and was not able to make it work.  When we brought our hopes and dreams --as well as our kids--into a relationship, we were hoping for the best.

The two of us, single parents to great kids, met for coffee or diner and had wonderful, emotional connections where I gazed across the table into his beautiful brown eyes and listened.  He was the wisest, most beautiful person I had ever met and he wanted to build a future.
He had a plan.

He had to explain.  Mario told me about the relationship between his father (a Broadway actor) Chev Rogers had with his wife (Mario's "step-mom"), Alice Evans.  Alice was Chev's refuge from the storms in life.  She was also the most exciting person in Chev's life.  With Alice, things were open and honest, safe and secure, challenging and filled with color.

Alice was also a Broadway actress, and could even break glass with her powerful voice.  She and Chev had met on the National Tour of Sound Of Music and became inseparable.  Their lives were one dream after another--and they adored each other.  They played hard, loved hard, fought hard and weren't afraid of truth and hard times.

Yes, if he ever married again, it would be to his Alice.

I remember feeling threatened by the comparison.  How could I be like the Alice he was looking at as the epitome of true-love?  A Broadway Dame with a big voice, a gorgeous face and head-shots that changed with each show she was in?  I was insecure, a single mom, vulnerable and desperately in love with the "perfect" Mario.

I went home from one of our coffee shop chats and wrote a poem I called "Your Alice".  The next day at work I gave it to him.  Looking at it now, I remember exactly how I felt:

Looking in your face I see
The warmth of what was meant to be.
Listening to words you say
Speaking of one special day
When things will just fall into place
With one perfect face...

How can another feeling be-
So full of longing (you and me)
Than my need to be seen as real?
For you to match the way I feel?

In silence, how this feeling bleeds
Surpassing all my wants and needs.
One face…
What shape? What look? What kind?
Tell me… and I’ll make it mine.

How I wish that you could see-
Your Alice come to life in me,
The peace in what you’re speaking of
I long for too: undying love.

The next day, Mario asked to see outside.  "Your poem," he said, with tears in his eyes.  "Where did you learn to write like that?  The last line...it's just how I feel."

I was flooded with relief. And love.  Not only did Mario love me, he loved my writing.  From there on in, we made plans toward marriage.

Mario decided to take me on vacation with him and his boys that summer.  They were headed to New York City to see Chev and Alice.  I needed some preparation and decided to ask Cynthia, Mario’s Mother, what to expect.

"Alice is wonderful," Cynthia told me, taking a long drag on her cigarette. "And Chev is horrible. Just horrible.”  I giggled.  Cynthia never minced words.  I was used to two peaceful parents, living a middle-class life side-by-side and never saying anything remotely insulting about each other.
“I’m not kidding,” Cynthia said.  “He’s hard to live with.  Just the most ego-maniacal man ever born!"

Chev, the way Mario described him, was larger-than-life.  An artist and an actor, he lived life by his terms.  Mario never exaggerated or lied.  Secondly, I had never heard an ex-wife speak so well of the new wife.
"That's because she really is an angel," Cindy, Mario's sister later told me.  Cindy had a special connection with Alice (even Alice called Cindy one of her favorite people).   "She is beautiful, inside and out!  I wish I could go with you!”

By the time Mario and I boarded our plane bound for NYC, I was so nervous.  I would be meeting the "new" in-laws, Broadway actors who were larger than life.

Arriving in New York City, June 1987, at nearly midnight, we had to go through Harlem to get to the West End of Manhattan, where Chev and Alice lived.  Chev answered the door looking every bit the Broadway star he was... and I'm sure capitalizing on my sheepishness.

"So this is Janet," he said, in a booming, deep voice, stretching his arms out for a hug. I smiled, and hugged him, hitting my cheek against a plastic stop-watch hanging from his neck.  We made our way through the kitchen and into a wide, open living area with a grand piano and crown moldings and a hanging chandelier.  I scanned the room for Alice, but Chev told me she was in bed.  How dare she??  After all, it was only 12:30... and I'm sure she was used to partying until dawn.

While Chev offered us drinks, Mario insisted we put the boys down to bed, and we began the process.  While we set up beds, I saw more "realistic" pictures of Alice around the room.  They looked like a normal couple, not so much the larger-than-life version I had made them to be, but rather like my own mom and dad, with family, baby pictures, holiday shots.

Somehow I slept that night, and when I awoke, it was to Mario stirring to go to the bathroom.  He walked outside, and was greeting by an excited yell, followed by a laugh.  I could hear the hugging from where I was. Mario giggled and Alice continued a melodious laugh... one that I was strangely jealous of.

I got out of bed, got dressed, looked for makeup, gave up and then walked outside.  There she was.  She was...so small.   Somehow she wasn't so "Broadway sized", she was even smaller than me.  She turned around and gave me the most disarming smile I had ever been greeted with.  I blushed, and hugged her, as she said "So this is Janet."

Alice made me feel welcome and told me quickly that she had heard all about me.  She wanted to know more and we connected in the beautiful living room, a baby grand piano in its center and pictures of family hanging on its cream-colored walls.
Throughout the week, Alice's beauty became real to me.  The perfect image I made of her broke away and I was able to see her in the warm and real place that she lived.  She was genuinely full of love for most everyone we talked about.  She asked real questions about me, about my family.  And she loved my poem.

"Honey," she said, in her gorgeous voice, "your poem is a treasure.  I wrote it down here in my journal, see?" I smiled, so humbled that she would save this.  "I am just so glad Mario has met you.  He needs a woman who really can see him."

Saying goodbye after the week was over was a little sad, but I was ready to get back home. As she hugged me, she whispered "And you, my dear, are a delight!"  She meant it.  It meant the world to me, and I thought about her the whole trip home.

At the end of the year, Mario and I got married.  We had our own passion, our own drama, and our own obstacles we somehow overcame.  The following year we had a daughter and named her Alicia, the name that Chev called Alice.

Today is Alice's birthday.  I cannot begin to tell you how blessed we are to call her family.  To have her in our lives means that we have a woman who values us and accepts us regardless of all our shortcomings.  She is always ready to bless us, encourage us in sad times and celebrate the happy times.  She is a delight and a treasure.

Over the years, Alice has earned the place in my heart that she already had in the hearts of our family – as a treasured, irreplaceable treasure.  But I like to think we have a special connection, one that has been tested by time and circumstance.  One that is not afraid of intimacy or questions – I am a better person for knowing her.

Blessings and love, dear Alice.  I love you deeply!
Posted by Brazen Princess at 6:53 PM 0 comments