Once there was a fish that lived in a bowl.  Every day, all day long, he swam furiously from one side of the bowl to the other.  One day, a new fish was dropped into the bowl and watched his bowl-mate with more than just a little curiosity.

On the fifth day, he swam in front of the fish as he trekked from one side to the other.  “What are you doing?”

“Move out of the way!”  the first fish said, swimming around him.  “I’m on a schedule!”

Don’t get in the way of a determined person and their schedule.  Whether you are working out, painting  a house or writing a novel, adhering to a schedule will most likely be part of your plan to succeed.  Schedules are highly underrated.  During NaNoWriMo, schedules are highly suggested for those attempting to write a first draft in 30 days.

According to Franklin Covey, identifying and focusing on an activity (that gives you the greatest returns) is one of the keys to time management. We all have the same 24 hours in a day, scheduled people have a way of saving  time and beating work overload – a key source of stress.

2.  Scheduling an activity makes sure that it will get done.

Setting goals are one thing; accomplishing them is another story.  A story that sometimes has no ending…  When we say that “Writing time is from noon to 2 p.m. everyday” for one month…It is more likely that we will accomplish the goal of a rough draft in 30 days.

Some people have a word goal – “Every day at noon I will sit down and not get up until I have written one thousand words.”   When it’s scheduled, it’s more likely to get done.

3.  Make your schedule work for you.

The gym is a good idea.  A trainer is the Nazi who will demand your presence at the gym to meet and sweat.  Making good food is a good idea.  Scheduling a dinner party and shopping for ingredients usually means that your good idea will become a thing of beauty.

Schedules are stressful sometimes, but remember that it is YOURS.  It won’t look like everyone else’s.  Most people work, some have children.  Late nights are a wonder for some, others prefer early mornings.  Some people are training for marathons, others are full-time caretakers.

Make your schedule be one you will keep.  And only you can say what that will look like.

A writing schedule, a place to write and a story idea is all you need.

The following is a partial re-post of last Novemeber's NaNoWriMo blog.
This one encourages a writer's schedule.

The greatest gift of writing is being able to communicate truth from the depths of your heart.  It’s why cavemen chiseled on walls; why the spiritual songs were written.  The Bible had to be written by a man’s hand to communicate the greatest truths and the heart of God.  Soldiers took up pens and precious paper  in trenches to declare the deepest love for their families back home - love that survived even the most horrific events of war.

We write to be understood, to cry out primordially from the depths of our soul.

NaNoWriMo is all about fiction- it requires a writer to shape out a novel (or a first draft) in one month. Want to try?  The first thing you need to do is write.  Writing takes time and is best done without interruption.

Most successful writers have a routine.

Today as you write, dear writer, let the heart of the God who created you come out, voicing the pain and anguish; the joy and the exhilaration; the sorrow and the pity of all that is in the world.  Focus on one thing and write.

If you are serious about writing, find a place, a position, a chair, a time that is conducive to writing.  If you write one page a day, that's better than you did the day before.  Try to develop the habit of writing and don't stop until you have reached your goal. 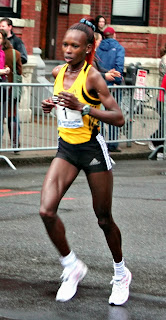 Among the world’s marathoners, Jeptoo is the woman to beat.

I ran a marathon two weeks before I turned forty with a time of 5:12:22 and I was ecstatic with my time.  I finished, and that was my goal.

They say that many people have running a marathon on the “bucket list” as it is the challenge of note that a normal person can give their body.

They also say that many people have "write a novel" on their bucket list.  Is it true for you?  In every person I have ever met is a book waiting to be written.

November is National Novel Writing Month (NaNoWriMo) in the USA.  Since it was Founded by Chris Baty in San Francisco, NaNoWriMo now has participants on every continent – even  Antarctica.

Technically it's now International Novel Writing Month, but the original name has stuck.  The way it gets done has become a phenomenon – online.

Because the internet has become such a “big brother” (pun intended) that we all share, the networking has become phenomenal.  Strategies for “getting it down” are shared and bounced around between writers and aspiring novelists all over the world.

Last year during NaNoWriMo I started blogging while I wrote my YA novel, euphobia.  Blogging and writing a novel at the same time is INCREDIBLY challenging and my trip to my blogsite became a weekly excursion, rather than a daily one.  This year is no different.  I am in the middle of my next work (I’ll introduce you tomorrow) and I am officially making an invitation to do the same.

HERE ARE SOME GUIDELINES if you want to join in!!

·         Participants register for free at www.nanowrimo.org to log their progress and share anxiety levels in the forums. Last year over three hundred thousand people took the challenge. This year 500,000 are expected to sign up.
·         a novel is officially 50,000 words, but some (like me) say that’s a baby novel, or “novella” (Stephen King wrote “Rita Hayworth and the Shawshank Redemption” as a novella).  Still, 50,000 words is a hulluva start on a rough draft.   NaNoWriMo’s website says a novel as "a lengthy work of fiction.”   Get started and get going.

Want to know the BEST thing about running a marathon?  It was meeting runners.  Runners are a special breed of people who think that everyone can run and there’s no such thing as “good” – there are only the people who do it.

Writing is the same.  We all have a book deep inside of us – if we had the time to write….