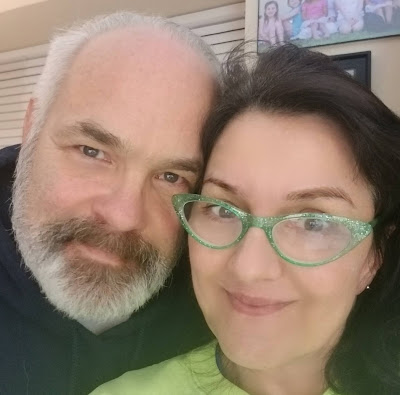 Today, Mario and I have been married for 33 years, it's our Jesus year, so to speak. Every year, I write a blog about our marriage, and I ask Mario what I should write about. Today, when I asked, he leaned against the door frame and thought.

“Wow,” he said. “It’s been a tough year. Maybe you should write about endurance.”

I nodded, and began.

In the old days, I swear this would have felt like a slap in the face. If I ask Mario what especially stands out in our marriage, I'm not really wanting to hear how both of us are good at sticking it out. This year is different. This year, 2020, I appreciate him saying this.

First of all, most of you know what I’m talking about when I write about this year. Most who are reading are family and friends, and most have partners or romantic relationships. You know what this year has been like, right? It’s been tough for all of us. It’s been a year of quarantine, diminished salaries, being trapped in closed spaces together. You know...

This year, on top of all this COVID quarantine stuff, Mario and I had major life changes which took place inside our family.  Where family is concerned, I don’t like change. I understand how family stuff can be emotionally supercharged, so I like it to remain predictably emotionally supercharged. This year has been filled with so many family changes, that it’s caused disturbing outbursts, challenges, discussions, and decisions. It’s sucked a lot of life out of me.

Usually, Mario and I agree about the important stuff, but this year? We felt like Oscar and Felix, Samson and Delilah, MaryMatalin and James Carville.

I love Mario and Janet. Mario and Janet disagree on a boatload of issues, but are genuinely together on critical ones, and always remain each other’s best friend.  This year? Challenged that. The issue of family is tender, and if we don’t agree on the direction we’re supposed to take, we fight. We’ve fought a lot this year.

A week ago, Mario and I were in one of these terrible fights. It was at the point of a tailspin, telling the other something like, “If only you would listen, then you’d understand...” or something like that. I don’t remember the specifics, but I do remember being exhausted.

There comes a time in most couple’s lives when they get tired of fighting about the same thing, over and over again. This exhaustion sometimes supersedes what they’re fighting about. The disagreement gets old, and the mountain looks familiar, blah, blah, blah... and they arrive at the inevitable fork in the road, where they have to ask themselves: “Do I pursue this later?” or “Do I drop it?”

(I have to give a disclaimer here—I’ve said this before—this doesn’t apply to addictions. Addictions are equivalent to ACID on a relationship. Relationships can’t survive addictions unless the addict gets help).

This year, Mario and I have had to agree to compromise a lot. In order to move on, couples surrender their way and make a deal that's acceptable to both, if they expect to remain friends. Some of us take longer to reach a compromise.

Mario and I are accomplished swordfighters by this time in our marriage—we’ve even learned how to duel without drawing blood—and no one would ever guess we were capable of inflicting such emotional wounds on one another. I’m ashamed to say this, but we’ve survived a lot of wounds this year. Tonight, as I type this, I promise you, that we have survived the battles, the wounds, the surrenders, because we share a deep love for one another and a shared faith. At the end of day, I have to remember that this man is the best guy I know—the man who understands me like no other human on the planet.

So, why would I ever battle with him, you may ask? It’s because I’m human and I like being right. Sometimes I wish everyone in the whole damn world would listen to me, and just do what I say. If they would, things would work a lot better. Sure, some people disagree with me, but those people are idiots.  When my husband numbers himself with the idiots, my happiness is suddenly threatened, and I hate it when my happiness is threatened. If there’s change happening all around me, I object—loudly. I don’t like change unless I orchestrate it.

That last paragraph? I hope it made you laugh...even if it feels true. We humans are selfish beings by nature, and usually we're good at masking this, until our happiness is threatened.

This year, the man who is my husband, my favorite human being in the whole world, disagreed with me more than he normally does, because he has the inconvenient job of bringing me back to earth and showing me how change is inevitable. He is the one who shows me our bank balance, and reminds me to stay on a budget. He encourages me to tell the truth, but with less brutal language. He explains how our children are adults, and need our support even when we disagree with their decisions. Mario brings me to the window of a reality that I often ignore, and encourages me to see that I’m not an obstacle to change—it will happen anyway.

This year I’ve disagreed with Mario more than I normally do, because I have the inconvenient job of reminding him that some things in our family are too important to lose, and there are some hills I am willing to defend with my life. Sometimes, when I’m grieving hard, I want him to grieve with me, and this year the grieving has even threatened his happiness. The explosive life and joy I bring to our marriage also comes with occasional dips into depression. I feel things strongly, love people with my whole heart, and usually can't hide what I'm thinking. I ask Mario to dream higher things for us, believe the best about most people, and encourage a life of creating beauty. I bring warmth and color and life, and Mario values these things so much that he accepts the cost. Thank God.

Mario and I both know we’re still together only because of God. Even the best lovers, the best friends, the best team can be split apart by a world that champions self-promotion and individualism. As different as we are, Mario and I have a shared faith, which inspires love, which in turn inspires life, which inspires others, and so on. Anything that’s good in us as people or as a couple has been forged by a refining fire that we know is God.

When Mario and I trained for the only marathon we ever ran together, a seasoned veteran told us, “You can split the race into two parts: the first twenty miles, and the last six.” Not until you run a marathon do you realize that an endurance race is toughest near the end. The body isn’t built to run long distances all the time. The best runners have a training schedule and work up to the distance—this is called endurance training. It's both brutal and critical.

Mario and I have endured so much this year, and we’re still friends. We're still lovers. We still see each other as life-partners. I am more determined, in our thirty-third year of our marriage, to love him and respect him.

This year has been tough, but we’re tougher.

Posted by Brazen Princess at 5:30 AM 9 comments 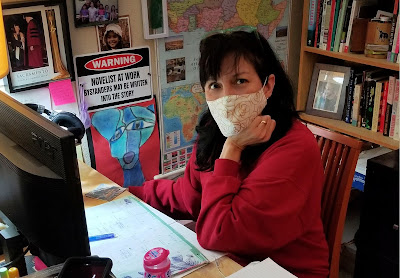 That’s how I’ve started every one of my birthday blogs, including the one I wrote last year. Who would have known that 2020 was waiting to pounce, that COVID19 was winding up and getting ready to take us down.  For my 57th year picture, I sat behind my desk, smiling and clueless, ready for another good year. Today, I type this blog in a state of exhaustion. My family had a beautiful holiday season, albeit pain-filled, including a threat of exposure. I’m guessing ours was a lot like everyone’s holiday season.

This year, we’ve all gone through the same time of shared isolation. We’ve seen each other on Zoom, covered our mouths and noses with cloth masks, and continued to use social media like everything was normal. Halfway around the world, friends wrote to me from lockdown, just like ours.

This year, I went to COVID funerals, including my beloved Auntie Molly’s. I went to COVID weddings, including my niece, Selena. I celebrated my Virtual graduation from Antioch University Los Angeles MFA program on Zoom, remotely whooping it up with my fellow Cardinals. My son and his family bought their first house and moved out of ours, all of this done with COVID restrictions. 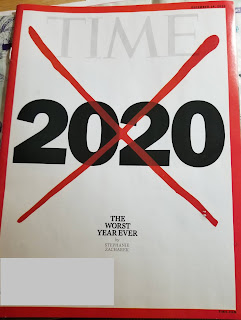 Time Magazine had a cover, which declared 2020 to be “the worst year ever,” and no one disputed this. Even in wartime, a year so fraught with  violence, moratoriums, and political upheaval has not been equaled.

In each blog, I end with my birthday Psalm. This year, Psalm 58 is as brutal as the past year. It ends, however with a promise for the righteous—we’ll all live through this. Not only live through it, but we’ll conquer.

“Mankind will say, ‘Surely there is a reward for the righteous;
surely there is a God who judges on earth.’” ~Psalm 58:11
I pray this coming year be filled with hope and love for all of you. Tonight, as I go to bed, I pray the same thing for my own family.
Janet
Posted by Brazen Princess at 3:03 AM 2 comments

Email ThisBlogThis!Share to TwitterShare to FacebookShare to Pinterest
Labels: Happy Birthday to me; writing in the time of COVID
Newer Posts Older Posts Home
Subscribe to: Posts (Atom)