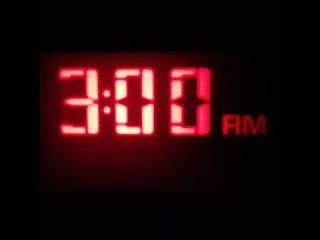 The air was warm and thick, like a typical Georgia summer.  Next to Aiden, his wife Katrina slept peacefully, her slow steady breathing nasal enough to hear, but not loud enough to be called a snore.  She had been asleep for three hours, exhausted after a day of chasing their daughters: two and three year olds.  Aiden reached over to her and rubbed her shoulder, hoping she might wake up.

How long had it been since they made love?  Five days?  Longer?  It was a weekend, he remembered.  Tomorrow was Friday…it had been six or seven days.  He rubbed her shoulder harder, but her breathing continued.  Katrina’s blonde hair hung in front of her face and she was wearing her striped pajamas that made her look shapeless, but he remembered what was underneath.  In the darkness, he scooted closer to her.

This motion made her inhale deeply and turn away from him, sighing in disapproval.  She had warned him many times not to disturb her REM sleep; Aiden suddenly realized she would not be aroused by an early morning wake-up.

The alarm clock glowed in the black of night: 3:00 a.m.  He fell back on his pillow, exhaling in frustration.  How could he EVER possibly repay his student loan?  It was unlikely, even after doubling his monthly payments like he had this last year, that he would ever make a dent.  He now had a six figure debt; one that might disqualify him for a home loan.  With his daughters counting on him to provide a stable home life, how could he have let this happen?  Then again, how could it have been avoided? His parents were normal folks who were too busy paying the bills to think about college savings.  He had the grades to go to college; but not brains enough to do the math.

The air was warm.  There was a drought and he couldn’t water the lawn.

What kind of world would let honey bees become an endangered species?  Why did he have to explain to his daughters that there were no lavender bushes because his beloved homeland had overused pesticides?  It was now up to him to explain that adults had screwed it all up.

The whole world was dangling by a thread and mankind was poised with scissors, waiting for the chance to snip it and have it all go to hell.

He sat up and reached for his glass of water.  There was still a swallow or two left, he was sure.  He felt the rim, placed his hand around the glass and then lifted it to his mouth.  The thin glass was smooth against his lips; Aiden lifted it until a small trickle of water wet his tongue.  It was gone; he had drunk it an hour before and forgot that he had until now.

Maybe he would get up and watch TV, he thought.  The girls were heavy sleepers and their room had a fan.  Then again, if he woke them they’d never go back to sleep and he’d be in trouble for sure.  No one would sleep at all.

Aiden sank back down into his pillow.  It was so warm.  Should he take off his T-shirt?  No, too much trouble.  He stared at the ceiling until he could see the familiar shape of the ceiling fan.

Nixon started it.  If it weren’t for him, the American presidency would still be respected.  That whole presidency was such a deceptive piece of history;  who was responsible for all that deception?  The whole Warren Report was a joke, he heard.  Was that available for viewing?  Could it be Googled?  Why the hell did Nixon resign rather than face impeachment?  After all, if Clinton could get impeached, and survive his Senate trial…

Aiden yawned.  It felt good to yawn and it reminded him he was tired.  He turned on his side and faced Katrina’s back.  The clock said 3:15; he had to get up in a couple of hours, but two hours was better than no sleep at all.  He stroked a piece of her blonde hair.  Why had she chosen him?
He felt her stir, and then she turned over and faced him.  Her breath smelled like rotten eggs, but he didn’t move.

“Hmmm” her voice sounded delicious and contented.  She tucked her hands under her chin.

“Are you awake?” He whispered, coyly.

“Don’t even think about it,” she said groggily.

In a few seconds her breathing returned to normal.

Aiden flipped on to his back again, making out the shape of the ceiling fan.

If only Nixon hadn’t taken the presidency; then things would be different.

Posted by Brazen Princess at 11:27 PM

Email ThisBlogThis!Share to TwitterShare to FacebookShare to Pinterest
Labels: sleepless night, special thanks to Debbie Woodhouse VanGraan, thank GOD for JESUS...otherwise I'd be just like this, worry