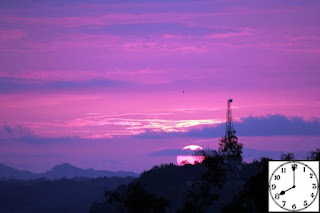 At eight o’clock, Roxanne enjoyed the deep purple sunset from her balcony.  The violet-rose hues were painted across the sky and met the earth in ribbons of gold that wound through the buildings of Korea Town.  She breathed deeply, grateful for her freedom and her passion.  Her second story studio apartment overlooked the Wilshire Synagogue on one side and Wilshire Blvd. on the other.  Mimosa trees lined the streets and lifted their arms to her, as if they were small children needing to be held;  passersby walked purposefully.  She wondered if they were on their way to see a movie - she had seen three already this month.  Money was tight, but the proximity of the theater made it easy to abandon the budget. All around her studio apartment were her works, many on canvas and some on tiles.

She breathed deeply and looked at her stained hands; her fingers were darkly tattooed with the India ink she had been using for her latest series.   The pen and ink drawings were drawn on pages from vintage books that she had rescued from the dumpster behind the 7-11.  The pages contained mostly text, now and then interrupted by diagrams of the solar system or charts of the night sky.  The hand-set fonts were from the 1930’s, possibly been used as a college text at one time.  After she had pasted four pages on to a brown paper shopping bag, she sketched faces of different girls: one deep in thought, another crying, another laughing, still another biting her nail.  After each sketch was complete, she began the intensive work with India ink.  Roxanne loved the process and the way it was all coming together, but as an artist she missed having color.

The pen and ink drawings cost almost nothing to do, since she used found materials: paper bags, pages of the vintage textbook pages, and India ink discarded by the art school.  She regularly haunted Jerome’s Art School’s  garbage.  Since it  is publicly funded, they have the luxury of throwing away “almost empty” bottles of ink.  She was lucky enough to find them the day she bought two hot dogs for a dollar and threw the paper boats away outside.

Los Angeles is expensive and unforgiving.  Crouching in its shadows are hungry renters with first and last month’s deposit.  Mr. Lee told her many times that inquiries had been made about the apartment she was now occupying; if she was ever again late with the rent he would be giving her notice to move out.  She earnestly promised him she would have the money on time; she did everything she could to make good on her promise – even go without food.

A hard knock on the door alerted Roxanne from the balcony.  She stepped over her work, expecting to find her landlord, holding a clipboard with his calendar attached.  He would also be carrying a fanny pack with dollar bills in its zipper pocket in order to make greasy change for her.  When she opened the door, she instead found the agreeable young face of Jin, her neighbor.  He was holding a bowl, covered in foil.

“Oh, thank God,” she stepped back swiftly and motioned for Jin to come in. Then she whispered: “I thought you were Mr. Lee.”

“Yeah, Roxanne,” he imitated the landlord’s high-pitched voice as he walked in.  “Tomorrow is the thirty first!  I have two other people who want this place!”

“Shhh!” Roxanne looked down the hallway both ways before shutting the front door.  Concerned that her landlord might hear them, she feared the temperamental Mr. Lee might kick her out anyway; he was just waiting for an excuse.  “What if he hears you, Jin?”

“What if he does?” the young man was still smiling as he set the bowl down on her kitchen counter.   It smelled of Asian spices that made Roxanne’s mouth water.

“What did you make?” she asked him, moving toward the aromatic bowl.

“Hot and sour soup,” Jin said, proudly.  “I watched a YouTube video and decided to make it for dinner with stuff I had in my fridge.  I kind of put my own spin on it.”

Roxanne giggled. “Does your spin include ramen noodles?”

“Of course!”  Jin circled around the counter and opened a drawer.  After finding a clean spoon he lifted it up in the air.  “Now eat, then tell me what you think!”

“What would I do without you?” Roxanne asked, taking the spoon from him and removing the foil from the top of the bowl. Inside, a rich broth with bits of steak and purple cabbage accents floated against a backdrop of ramen noodles.  A few sprigs of cilantro were on top.  “This looks amazing!”
Jin smiled.  “Thanks.”

Another loud knock on the door made Jin and Roxanne look at each other and freeze.  “Should I get it?” Roxanne whispered.

Jin shook his head, indicating she should not.

After tasting the soup, she put her spoon down and went to the door.  She opened it slowly, revealing a young woman dressed in a Chanel dress.  “Carla!” Roxanne’s whole body relaxed in relief at the sight of her sister.

“Roxanne!” Carla seemed as if she were on a mission.  “You have to come out with me tonight.  I need a few artists on a shoot we’re doing.”  Carla, an executive assistant to the CEO of an entertainment company, always had the most exciting opportunities for Roxanne to make money.  If the shoot paid, she would be able to make rent.

“Is this a paying job?” Roxanne raised her eyebrows.

Carla stood still, a Gucci bag dangling from her forearm.  She had just taken notice of Jin, and the bowl of soup on the counter.  “Am I interrupting something?”

“Carla, this is my eighteen-year-old neighbor, Jin,” Roxanne said.  “And no, we are not dating.  He’s much too young for me.  But he is a good cook.”  Roxanne looked at Jin, who seemed a bit wounded, and winked.  He brightened and stepped forward to shake Carla’s hand.  She complied, quickly shifting her focus back to her sister.

“Alright,” Carla said to Roxanne. “Get dressed.  Wash your hands.  Pack up…” she looked at the pen and ink drawings all over the floor.  “Can you bring this with us?”

Roxanne looked at Jin, who was putting the foil cover back on the bowl of soup.  “Wait, Carla.”
Carla turned on her Jimmy Choo’s and faced her.  “What?”

Carla sighed heavily.  “I suppose if you want to be paid we could probably manage five hundred bucks.  If that money is so important to you…”

Roxanne clapped her hands and resisted the urge to jump up and down.  “Thank you!!  I’ll do it!”  The weight of financial burden had been lifted off her shoulders, at least temporarily.  Suddenly, it occurred to her that she didn’t know what kind of shoot it was.  “Is this a photo shoot I have to be in?  If so, I can wear clothes, right? This isn't going to be some nude thing, right?”

Carla removed her iPhone from her Gucci bag, rolling her eyes dramatically.  As she texted, she nearly shouted: “Oh for heaven’s sake!  No!! We just need you to sign a release so we can use your art.  We’re doing a night shoot at the MOCA and none of the art can be photographed with the artist’s permission.  Yours is…” Carla searched for the right words.  “Yours is transitional.  You’re not famous yet so we won’t have to worry about…” Her text was sent and she looked up at her sister’s dumbfounded face.  “What?  What did I say?”

“My art is going to be photographed?  For what?” Roxanne could hardly believe her ears; after years of struggling this one night might change everything.  Everything.

“Oh, for heaven’s sake, Roxanne,” Carla said quickly.  “Get dressed.  Let’s go!  I have to be on the set in half and hour and it’s at least that far away if Wilshire isn’t a parking lot!”

As Roxanne dove into her closet looking for something to wear, Jin politely excused himself, leaving the covered bowl of soup on the counter.  Carla didn’t even acknowledge him as he quietly tried to say goodbye.  He exited, broken hearted.  All Jin remembered about the evening was his beautiful neighbor introduced him to her sister but told her  they were not dating.  All of the hope in his heart was diminished, and he went on to his own studio to play video games and eat ramen.
Posted by Brazen Princess at 2:55 PM