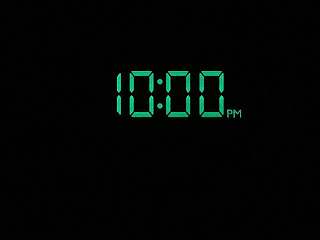 Geralda, a precocious fourth-grader, was alone for the first time ever in her life.  Mama had taken a job working nights in town and left her only daughter at home by herself.  Feeling both mature and excited, Geralda knew she was ready; her mother agreed after they practiced several trial runs.

Geralda knew where the emergency phone numbers, first aid kit, and silent alarm were located.  She had enough milk, cereal, and tortilla chips (in case she wanted to make nachos).  Also in her possession was a Blu-Ray DVD of Princess Bride, her favorite movie.

At 10:00 p.m., the time when Geralda was supposed to be brushing her teeth and getting ready for bed, she was reclining in Mama’s chair, eating tortilla chips from the bag.  All the lights in the house were turned off and Indigo Montoya was sword fighting the Dread Pirate Roberts when Geralda felt the first wave.  She sat up straight in her chair; the screen image of the duel zipped into a thin line and then disappeared.  There was a definite wave beneath her: a rumbling of motion – and then screams from neighbors.

Being raised in Los Angeles, she knew that when an earthquake hit – it was time to duck and cover.  She started to go under the dining room table (covered with Mom’s taxes and a printer), but then decided to open the screen door and look out.   She loved how Los Angeles glowed in the dark – but at this moment, panic seized her. There was no glow, only darkness and an eerie silence.

A hard knock was on her door.  She had been warned not to open it for anybody.  “NEVER,” her Mom had told her.  “NEVER open this door for ANYONE when I am gone!”

There was activity in the hallway, people talking excitedly.  Geralda felt a primal sense of wanting to be with her neighbors who were out there, but she was scared that if she opened the door her Mom might never leave her home alone again.

She went to the door and pressed her ear against it.  Was that Mrs. Gutierrez? Was little Lupe still awake?  She could hear voices saying, “It wasn’t very big, but she’s home alone!”

Another hard knock, this time with an open palm, jolted Geralda back from the door.   This time she definitely heard Mrs. Gutierrez’s voice.  “Mija, open up the door, it’s okay!  Did you feel the earthquake?”

Geralda looked outside again.  She heard sirens in the distance.  Moving toward the sliding glass door, she could see that power had been restored to the blocks beneath her.  Wilshire Blvd. looked busy, as usual.  The distant freeways looked like they were moving.  She could see the towers of L.A. Central, lit up in places.  Perhaps it was going to be alright.

Beneath her feet, another rumble came, this time a shake that knocked her off balance.

Aftershock.  That’s what she learned in Earthquake preparation at school.  After a major earthquake there will be several aftershocks.  That one seemed larger than the actual earthquake.  What was going on?  Tears welled up in Geralda’s eyes.  She looked around for her cell phone; the apartment was still without power.  Where was that flashlight?  Was it in the drawer?

“I’m here!” Geralda yelled from the kitchen.  “I can’t open the door!”

“Mija, esta bien!  Open the door!  I told your Mama that I’d look after you in case of an emergency…”

From the recliner, Geralda heard a small rumble.  Her cell phone!

She ran to it and pulled it out from between the cushions, knocking the tortilla chips off the armrest and spilling them on the carpet.  She looked at the screen: Mama.

“Are you alright?” Mama asked excitedly.  “Mrs. Gutierrez said she can’t hear you in our apartment and you won’t open the door…”

“You told me not to!” Geralda felt a strange mixture of panic and anger.  She wished her Mama hadn’t taken the job downtown working nights; she wanted her here in the living room.

“You can open the door for Mrs. Gutierrez, especially in an emergency…” Mama’s voice sounded calm and watery.

“Why aren’t you here, Mama?” Geralda gave way to her tears.  She wanted to be held by the woman that held her when she was sad or scared; where were those arms now?

“Geralda, listen to my voice,” Mama said calmly.  Geralda breathed deeply and forced herself to focus on Mama’s words.  “I will be home in three hours.  Can you set your phone alarm?”
“Yes..” Geralda sniffled, but knew that three hours wasn’t long.

“If I get on the road right now, I will be joining the other panicked residents trying to leave the city…”

“Why are you working nights, Mama?” Geralda interrupted her.  “Why can’t you work at the El Huarachito anymore?”

She heard Mama breathe deeply and sigh.  “Mija, go to the door and open it. Mrs. Gutierrez says she is there in the hallway with Lupe.  Maybe she needs your help taking care of the baby.”

Geralda walked to the front door, slid the chain lock and undid the dead bolt and then turned the handle.  There, in the hallway was Mrs. Gutierrez, holding her two-year-old, Lupe.  At the sight of her, Mrs. Gutierrez fell to her knees and put the toddler down.  As she embraced Geralda, Lupe squealed with delight and began smacking the twelve-year-old’s elbows with glee.  From the phone, Geralda heard her mother’s voice.

“Okay, mija,” she said, gently.  “Go and sleep on Mrs. Gutierrez’s sofa and I will be home in three hours, okay?”

Geralda released Mrs. Gutierrez from their embrace and absent-mindedly nodded at the phone.  “Okay, Mama.”

Geralda wiped the tears from her eyes.  She breathed deeply and picked up Lupe in her arms.  “Okay, Mama.  I will lock our door.  Don’t worry.”

As she hung up, a whirring sound alerted Geralda to the kitchen.  It was the refrigerator; the power was back on.

As she locked the door, Geralda looked around.  Crowding the hall were neighbors, watching her perform the simple task of turning the key.  They all seemed relieved that she was alright; she was a little embarrassed.  Holding little Lupe and following Mrs. Gutierrez, the girl went into the neighboring apartment as the hallway cleared and doors shut behind those who retreated into their homes.

Posted by Brazen Princess at 12:31 PM

Email ThisBlogThis!Share to TwitterShare to FacebookShare to Pinterest
Labels: A special thank you to my cousin Nina who is so beautiful and wonderful, clock series, earthquake, panic, power of community