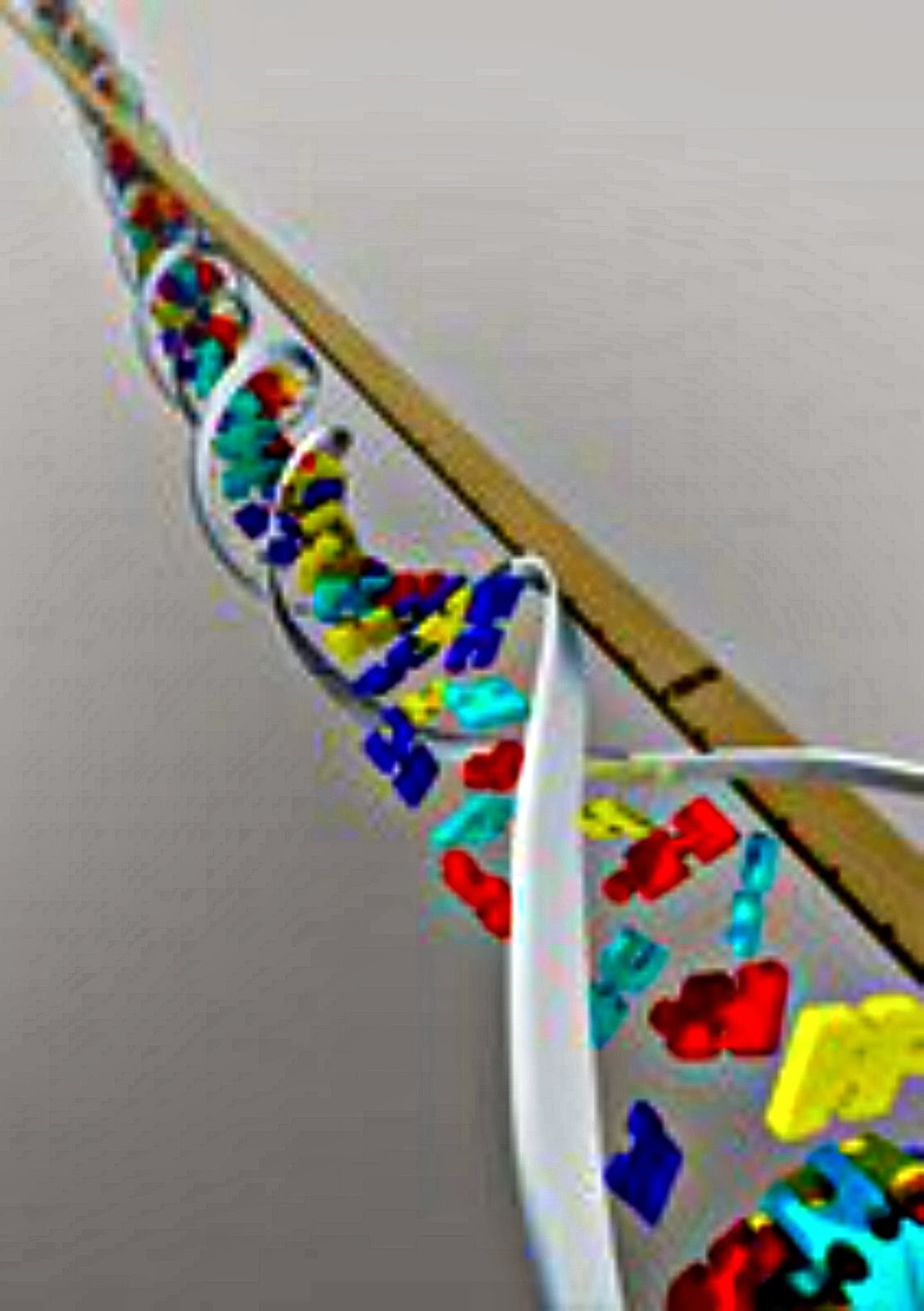 Jennifer was born to Lyle and Kendra six months after their shotgun wedding, they liked to tell people as they winked at each other.

Lyle collected shotguns and insisted that the groomsmen all be photographed holding one.  He laughed his head off at his bride’s reaction: the bridesmaids secretly donned garter belts with pistols in them.  The wedding photographs went viral and appeared in many top ten lists that year.

Jennifer was a baby that was always held, always cuddled, always well taken care of.   It wasn’t until her first birthday that people started suggesting something might be wrong.

Jennifer didn’t speak and didn’t like eye contact of any kind.  She preferred playing alone, rather than in crowds and delighted in silence and routine.

“I was looking on the University of North Carolina’s website,” Kendra’s mother said to her on one of her many unannounced visits.  “And they listed early signs of autism in babies and toddlers…”

“Stop, Mom.  You’re always worrying about dumb stuff and I swear that you’re always trying to freak me out.”

“They listed things like lack of eye contact, not smiling, not reaching up to be picked up…”

Kendra felt her thermostat reaching alarming levels and asked her mother to leave, explaining that she was on her way to Yoga class - a lie she knew her mother would believe.

After she left Kendra’s breathing returned to normal and she texted Lyle to tell him about the grief her mother brought upon her and asked him to bring home pizza.

Over dinner, Kendra explained to him how much her mother’s suggestions were designed to unnerve her.

“I mean, I’m a new Mom!  Shouldn’t she back off and let me do this myself?  How am I supposed to learn and make my own mistakes…”

“Why are you so mad at this?  Your Mom has always been like this.”

“Not about Jennifer! This is my baby, not hers!”

The pizza had light sauce and extra cheese and Kendra loved the spicy pepperoni, even though she knew she’d pay for it later.  Her breast milk might be peppery as well, she thought.  She was considering another slice when Lyle spoke up.

Kendra and Lyle trusted their family physician, who referred them to a specialist, Dr. Leifle, who worked in the same building.  Unfortunately, the specialist had so many patients that her receptionist gave Jennifer an appointment that was two weeks away.

“Until then,” the receptionist smiled courteously.  “Go on with your lives as you normally would.”

It was easy for the receptionist to say, Kendra thought.  In those two hellish weeks of waiting, she paid close attention to Jennifer’s face, eye contact, body movement.  She did google searches about autism, hardly sleeping after realizing that the symptoms they described were very much like Jennifer.  In those two weeks both she and Lyle had a strange emotional tension.  There was no green light to celebrate nor was there permission to grieve a diagnosis that could change their lives.

The first visit was on a Monday and consisted of a barrage of tests.  The following Wednesday, the doctor asked the couple to come again to her offices the next day.  Kendra knew it would be to hear strange and terrible news.

“I’m sorry.” The doctor could not penetrate the shocked, horrified looks on Lyle and Kendra’s faces.  For several moments there were no words and the doctor didn’t force conversation.

“How do we know the tests are conclusive?” Kendra asked.

“We only know what we can observe, and what we have all observed is that Jennifer is unusually unresponsive.”

“ Usually, by the time I see a child, the parent has already noticed some abnormalities.  Many times the grandparent is the first to see.”

Kendra looked at Lyle and thought of her mother.

“I kind of knew something, too.” Lyle’s voice was shy, as if mentioning this would break his wife’s spirit even more.

The doctor nodded and tried to smile.

The doctor leaned forward and was remarkably cool.  “The way we usually treat  a child showing signs of autism, or PDD, or related disorder is that we cooperate in a team, over a period of time.  The most important thing is you,  the parents.  We, the doctors and specialists will work as a team to monitor her progress and suggest treatment.”

Lyle squirmed for a bit, then swallowed hard.  “We don’t have health insurance.”  Kendra gasped and glared at him.  How could he think of money right now?

“We can work with you on that.  Please don’t be afraid to approach the subject of payment – it usually is one of the first things on a parents’ mind.”

“I don’t care how much it costs…” Kendra tried to object, but when she heard her voice it sounded dramatic and emotional.  She leaned back in her chair and decided to listen.  Jennifer was content to be in her carrier, but Kendra took her out and held her close to her chest.

“You know,” Dr. Leifle spoke carefully.  “Parents believe that recovery exists on many levels.  Many of my patients have worked with their children to do something they call  ‘Early intensive behavioral intervention’…”  she reached behind her for a large pamphlet that she handed to Lyle.  “If you’re willing, it’s worth a shot.  I must be honest and tell you that a substantial portion, somewhere just over half of children, experience no change.”

Lyle and Kendra read the pamphlet and hardly heard the last part.  Jennifer accepted her mothers arms for a few more minutes before wiggling and then spitting up.  Kendra put her back in her carrier.

Kendra’s full time job the next two years was working with her daughter.  While her friends with children made play dates and went to the park and posted pictures on instagram, Kendra warred against the phantom autism threatening to steal her daughter.  An Applied Behavior Analyst (ABA) worked tirelessly alongside of her two days a week, believing that breakthrough would come after rewards and positive reinforcement of all things.

Kendra found her life to be noble, but unromantic.  It was a lesson in patience; slow and deliberate.  She learned how to speak in a voice that was never raised, no matter how frustrated she would become.  She learned that naps were essential,  for her as well as Jennifer, as were early bedtimes.

Lyle (a landscaper)  would come home from work and fight against his own exhaustion to prepare food for the two.  It was a battle for him not to feel isolated, only hearing about victories from his wife and the ABA specialist without seeing much himself.

He once returned home to find both of his girls asleep on his bed, and he rested against the doorway, admiring their golden curls.  Angels with peaceful faces, he thought,  asleep like any other mother and daughter.  He tiptoed closer to the bed and smiled over them.

Jennifer stirred and opened her eyes.  Lyle smiled at her. Her cheeks were rosy and her eyes were blue and sparkly, looking back at him.  Lyle’s own began to sparkle, seeing his daughter looking back at him, like any three year old would look at her Daddy.  He saw her and she saw him.

“Hi Jen!”  He whispered.  She didn’t look away, maybe because she was waking up, he thought,  but then he realized it was more.  It was connection.  His daughter had looked at him before, but this time, it was different.


Please pray for the families of autistic children as you read this. If you want to do more, click this link to "Autism Speaks"
Posted by Brazen Princess at 5:43 PM

Email ThisBlogThis!Share to TwitterShare to FacebookShare to Pinterest
Labels: "This time, 5 word challenge, fiction, it was different" Thanks to Lisa Haynes