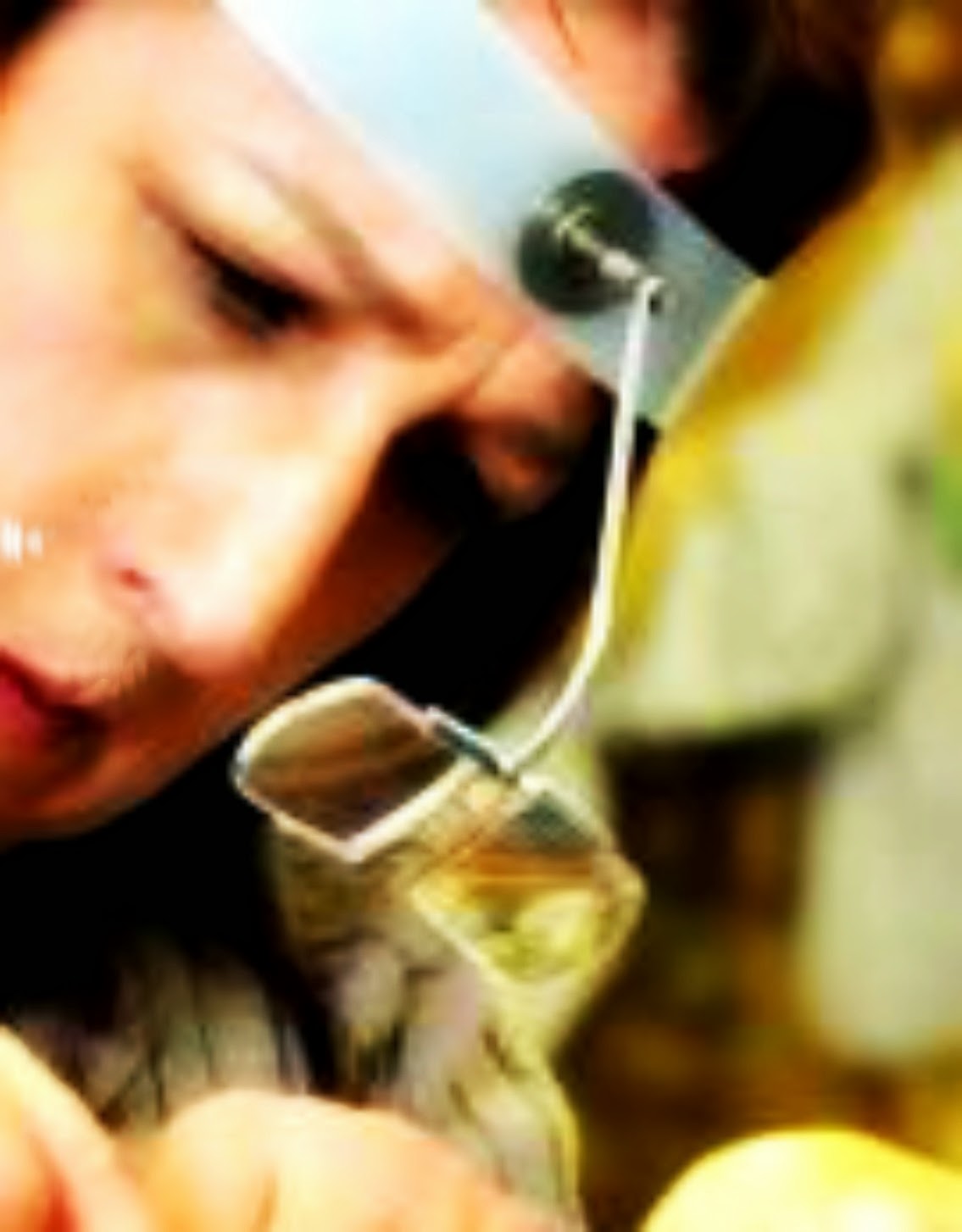 Cynthia wore a halo around her head - the restoration artist’s variety.  Attached to said halo was a pair of magnifying glasses, which hung over her face making her job all the more pleasant.

“You look like an anglerfish, Mommy,” Cynthia’s precocious son, Garth teased her  when he visited her at the museum one morning.  His Father tried to shush him, but Cynthia smiled.  The child’s father, Harry,  was no longer Cynthia’s husband.  He stood, stoically in her light but Cynthia pretended not to be bothered by it.

“Who is this?” Harry pointed at the figure that Cynthia was painstakingly detailing.

Cynthia sat back and tilted her head at her subject.  “Her name is Veronica,” she said, finally.  Cynthia looked for the first time at the overall expression of her subject.  She had been lost in the job of restoration and hardly remembered that this project was a person, not just detail of wood.

“She’s beautiful!” Garth sighed.  Cynthia smiled at him and her son’s grey eyes glittered as he admired the face of the woman being restored.

“I’ll bring him home on Sunday, then?” Harry stood up straight and nodded to her.

“Please text me when you’re on your way.”

“I will.”  Harry’s about-face was so familiar; Cynthia was accustomed  to seeing him walk away.  Garth looked over his shoulder and broke free from his father’s hand, running back to Cynthia and hugging her.

Garth released her and walked cheerfully back to his father.  At four years old, Garth was happy in the company of both parents and Cynthia had no desire for that to change. She watched them both walk down the hall, and soon they disappeared around the corner.  Within hours, she was all alone in the large hall, the museum loft that had incredible natural light.  The storms threatening the twin cities  were actively brewing - and it was Friday.  Most of the restoration team left early, but Cynthia knew that a weekend alone meant time to catch up on the task of restoring the museum’s new acquisitions.

She turned her attention to Veronica again. 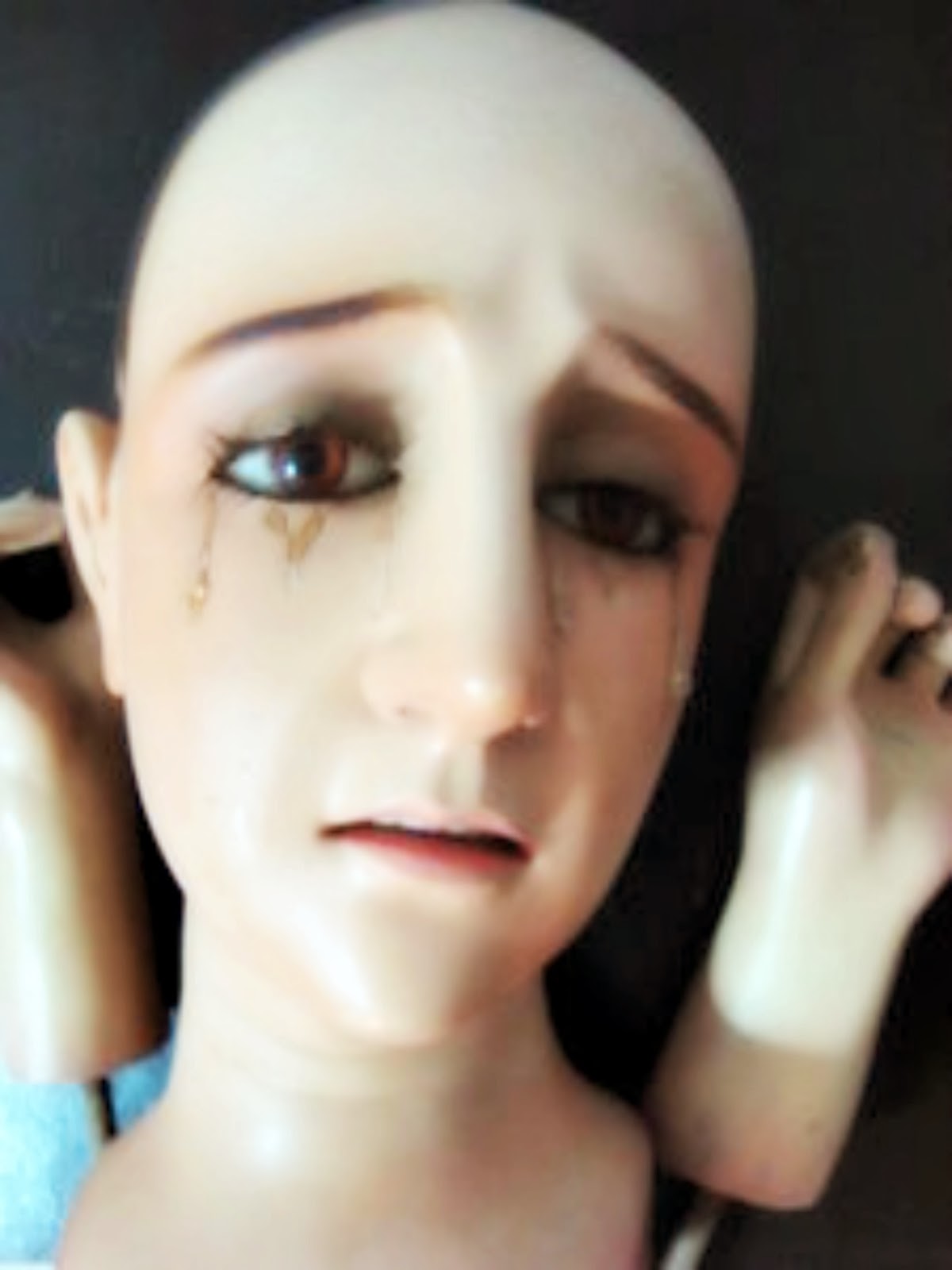 This project had just come to the museum from Italy and Cynthia knew very little of it, other than the artifacts had once been in a church that was bombed at the end of the First World War.  In cleaning out the contents of the church, the neighboring abbey preserved these artifacts.  This one, a simple bust and hands, came in a wooden box marked “Veronica.”

Cynthia’s job was to restore the bust and hands to their natural state with as little interference as possible.  Preserving the natural beauty was tantamount to the museum’s curator, who placed implicit trust in the restoration team.

She picked up the number four fine detail brush and held it lightly in her fingers.  It’s beautiful Mongolian sable glowed with the color of ripe pumpkin, and Cynthia drew a thin black line across Veronica’s eyelid.  The detailing was perfect and the artist’s steady hand was unflinching.

Cynthia looked at Veronica again.  The bust looked helplessly at her; tears streaming down her cheeks.  Her furrowed eyebrows were sloping toward her delicate ears, and Cynthia was suddenly – uncharacteristically embarrassed.  The  girl’s expression was unchanging, a severed bust that was grieving for an unknown reason.
“I bet it’s a man, isn’t it?” Cynthia whispered.  The girl said nothing and the artist began the same process on the other eye.  This girl probably put all of her hopes in one man, she thought.  A man who cared only for himself and the advancement of his own career, maybe.  Look at this expression!  No girl has this expression unless she has been heartbroken by  a man.  No one can cry like this except….

The other eye was finished.

Cynthia leaned back and observed the face; pleased that the process had been so truthful to the original Veronica.  The bust had a slight downturn of her forehead, as if tilting her head in sadness.   The next part of the restoration was the neck.

Lucky for Veronica, she was created as a young woman.  The one who carved her out of the wood only had to add minute wrinkles and  painting would be relatively easy to match.  Veronica’s bust had survived an explosion, an excavation, being shut up in a crate, an ocean voyage where the waves tossed the contents around, banging them up pretty well… and landed here – seventy years or more later.

“You look pretty good, considering…” Cynthia said to herself.

“What was that?” someone asked.  Cynthia was startled that someone was near enough to hear her voice and looked up to see Julia, the museum curator, walking toward her smiling.

“Are you talking to your projects again?”

Cynthia smiled, embarrassed.  “This girl is named Veronica.  She’s seen her share of water damage, cracking, even damage from a fire that resulted from the explosion.  I was telling her she looks really good.”

“I’ll say!” Julie’s admiration made Cynthia smile.  “I love how you’ve gently restored her, not all at once but  slowly and surely.  She really does look original!”

“Are these original tears?”

“Amazing.  What are they made of?”

“I’m fairly certain they are methylcrylate, after researching…”

“I’m not sure either, but we can have it tested on any broken pieces.”

Both women continued to admire the restored - but still weeping - Veronica.

“You know who this is, right?” Julia inquired.

“This is the weeping Veronica.  Catholic tradition believes she wiped the face of Jesus with a towel after he fell under the weight of carrying his cross.

“Oh.”  Cynthia was surprised at the identity.  “Here I thought she was crying about a man…”

“She was!  She was crying about the Christ!”

“Hmmm.”  Cynthia knew little about Jesus Christ, other than historically.  She had restored many paintings that He was in, but restoring paintings wasn't the same as....

“Listen,” Julia stood up straight and faced Cynthia.  “I came in here to remind you that the storm clouds are moving in and you should go home.  I’m going to lock up this place, and I was hoping I could give you a ride home.”

“That would be very nice of you.”  Cynthia removed her halo and set it on the point of her easel.  “Goodnight Veronica, see you tomorrow.”

Once Julia dropped her off at home, Cynthia looked around her well-decorated house and heard the howling winds outside.  There was nothing to hold on to in the house- no husband, no son.  She might soon be without electricity and she became frightened.

She remembered Veronica’s face, tearful and frightened.  Who was she looking at?  Where was this Jesus?  Cynthia lay against the sofa’s pillows, closing her eyes tight.

Who was there to restore the restorer?
Posted by Brazen Princess at 11:32 PM