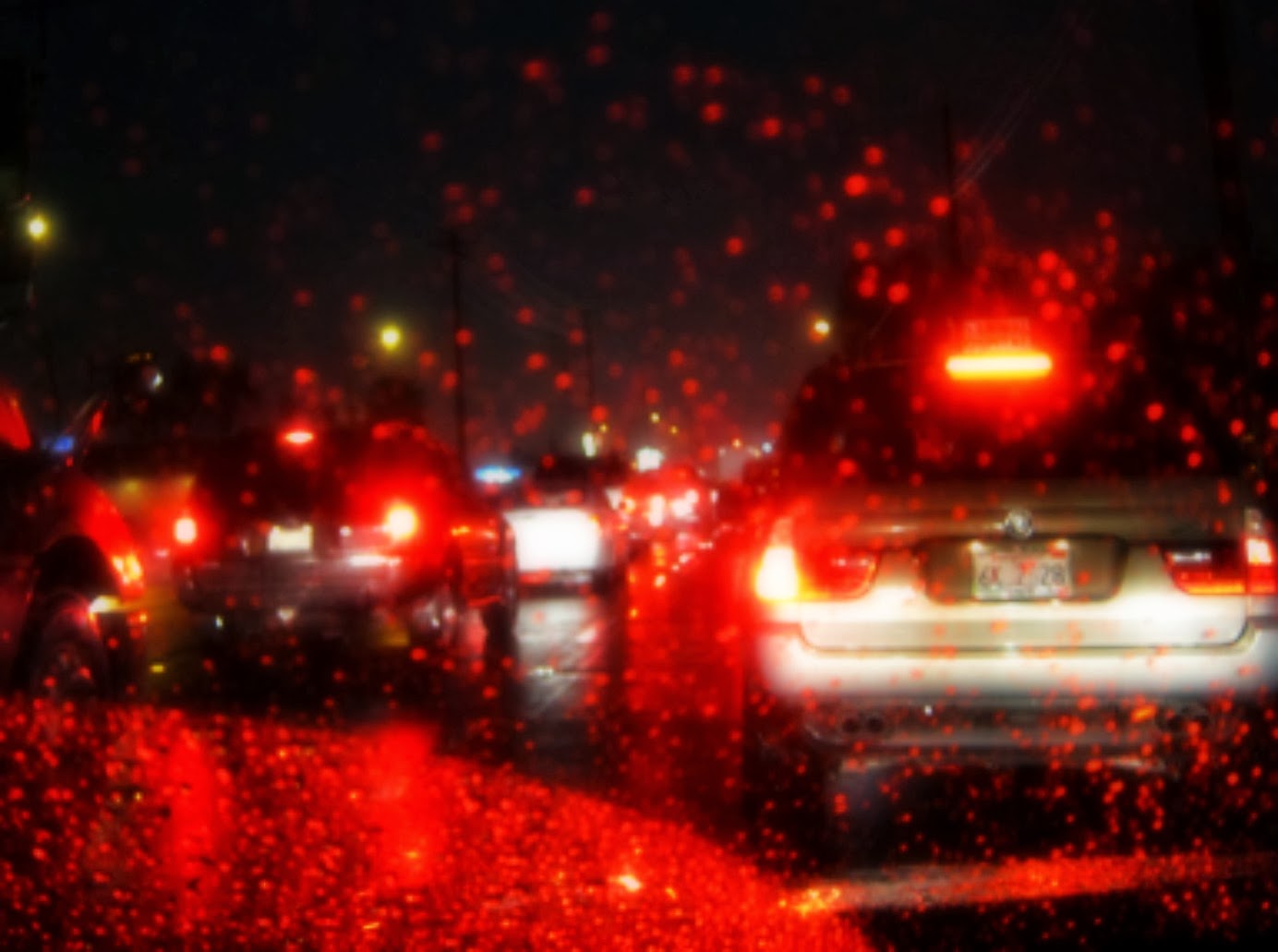 Danny stood at the corner, waiting for the signal to change as the rain poured down on him.  He held his dry cleaning slung over his back and  turned up his collar as he waited to cross the street.  It was finally coming down hard, and he wished that the rain could have waited one more hour.  He could have made it to his sister’s place, straight up the road in that time.  Shawna, his girlfriend, had kicked him out of the house once and for all.

The streetlight flashed a glowing white figure, signaling it was safe to cross.  Danny heard the tweets of the signal, just in case he was blind and unable to see walking man.  He hurried across the crosswalk just as the downpour began.  He leaped over puddles and took shelter underneath the organic grocer’s awning, next to the oranges.

The grocer was just closing up, and the fluorescent lights were flickering anemically as he brought in all of the displays.

“Are you okay, buddy?” the grocer asked.

Danny was shaking his hair out like a dog would shake his fur. “Yeah, I’ll survive.”

The grocer didn’t press him.  After all, Danny didn’t look lost or homeless, just wet.  He stood underneath the awning catching his breath, contemplating his next move.

He was a tall, manly forty year old.  His jacket, a black Harley Davidson Classic Cruiser, communicated himself to the world: he was tough and ready to rumble….

With anyone but Shawna.

He took crap from her all day long and now she had the keys to his ride and was threatening to sell it, saying he hadn’t brought home enough money to pay the bills in a long, long time.

Her timing was wonderful.  The guys in the monkey suits had just promoted him and tomorrow  he was scheduled to start his new job in the west building with the fancy offices.  He would be representing the finest company in the world: Harley Davidson.  He couldn’t be late; couldn’t show up unshaven; or carrying around this negative-loser spirit.  Damn her!  Her timing was shit.

“Are you sure you’re alright?  I’m closing up.”  The grocer had a strong Mexican accent, looked clean-cut ; in his late fifties.  Danny could tell he was trying to help, but Danny hated repeating himself.

The grocer shut the lights off and locked the door.  He pulled the exterior grate closed and pressed the padlock in place, making sure that it was secure.  “Okay then, goodnight.”

The man made his way to an old white Datsun pickup in the parking lot and Danny decided to ask him for a ride.

“Hey!” Danny ran out to him in the pouring rain, managing to catch the man before he got in his cab.  “Can I have a lift to my sister’s house?  It’s right off of First street, right up there.”

The grocer was smiling, but Danny could tell he was hesitating.

“I’ll be fine in the back here,” Danny motioned to the back, where a collection of wet cardboard boxes had collapsed from the rain.

Danny didn’t argue and got out of the rain and into the cab.  It was a typical Datsun pickup: a good strong ride stripped down to basics.  “Thanks, man.”  He didn’t shake his hair, but rather wiped his face with his hand.

The Datsun started with a “crank, crank, crank viiiiimmmm…” that all Datsuns do, and Danny felt encouraged, like he just caught a break.  His sister would surely let him in and from there he could make a plan for tomorrow and somehow getting his stuff back.

Ramon left the parking lot with too much care and proceeded down Martin Luther King Blvd. rather slowly.  For some reason, Danny wasn’t as irritated as much as he usually was at slow driving.

“Why are you out in the rain?” Ramon asked.

“Girlfriend and not wife?”

Danny smiled and looked at Ramon, who kept his eyes on the road.  “Yeah,  my girlfriend.  She’s too mean to be anybody’s wife.”

Danny laughed a little.  He didn’t argue at all and knew Ramon probably meant well, but he didn’t want to get lectured by a stranger - even one who was giving him a ride.

Ramon’s windshield wipers did remarkably well in the downpour and traffic seemed less heavy.  People were trying to stay off the roads in this weather.  It was stormy and wet and everyone preferred inside to out.

“So you’re on your way home now?” Danny asked Ramon, who kept his eye on the road.

“Yeah, I go home and have some dinner and then put my kids to bed.  They have homework and sometimes they need me, so I try my best to help.  Then I go out and do some work with my son for his business.  He’s trying to get this new business started….”  Ramon’s voice trailed off and Danny looked out the windshield to see why.  All he could see on the road was red tail lights.  Something was stopping traffic.

Ramon turned the radio on and a Spanish station blared, enough to make Danny wince.

“Sorry,” Ramon said, smiling.  He switched the dial to a news station and heard a traffic report, reporting major slow-downs around town because of the weather.  There was no special flag on Martin Luther King Blvd.

“Guess it’s just slow because of the rain.”

“Yeah, you can drop me at the corner.  It’s not far from there.”

The windshield wipers made a “flap, flap, flap” and the rain continued to come down hard, and the radio was now moving on to sports.  Danny strained to listen, knowing the unbreakable rule of never touching another person’s car stereo knob….

He thought of Shawna.  When he met her, she was seventeen.  He wasn’t supposed to like her, but he did.  He was thirty, just out of another dead-end relationship himself.  It was a river boat party and Shawna was there with her Aunt Rita, a mutual friend.  Her brown curls had glimmered in the sunlight like water.  Her bare back was light and full of freckles.  He hadn't been able to stop staring at her…

Turning on to First street, Ramon slowed the Datsun even more.  Danny rolled his eyes to himself,
remembering to be grateful for the only ride available to him that night.

“It’s right up here- this yellow house with the green light.”

“I’ll wait till she answers.”

Danny opened his door and got out, throwing the wrapped dry cleaning over his shoulder.  “Don’t wait for me to get in, it’s okay.  Thanks so much for the ride!”

Ramon smiled at him as he shut the door.  In a moment, Danny was under his sister’s porch ringing her doorbell.  There were no lights on inside and soon he had a sick feeling that she wasn’t home.  He rang a second time.

“You’ve got to be kidding me,” he whispered to himself.

Seeing no movement from inside, Danny leaned against the post and turned back to face the pouring rain.  In the driveway, the Datsun waited, its lights still on and windshield wipers flapping.  After a third ring, Danny decided to go tell Ramon to just go home and he would wait on the porch.  After all, there was a chair there and he could sit out of the rain.

When he got to the pick-up it was Ramon who talked first.  “Get in!”

Danny got in, still clinging to his dry cleaning.  “Just leave me here, man.  I can sit and wait for her.  She gets off work late sometimes.”

“How about this,” Ramon said, facing him.  “Come home and have dinner with me and my family.  When it’s time for me to go help my son, I’ll drop you off then.  You need to get dry and maybe hang up those clothes.”

Danny smiled.  He was humbled by the offer, but suddenly self-conscious of his hair, his jacket, his tattoos.  He wondered why Ramon would offer such kindness to him, a man he found wet under the awning of the store.

“Man, you are a stubborn person.  No wonder your girlfriend is kicking you out of your own house.”

Danny smirked and nodded his head.  “I guess I deserved that.”

“You want me to take you back home and you can apologize?”

Danny remembered back on Shawna tonight.   She was livid; a tiger, determined to get him away from her.  “All you do is take, take,take!” she shouted at him, pushing him out the door.

He had tried to calm her down, but he could have seen this coming.  The end had been looming in the distance for months.  He looked at Ramon and shook his head.

“She doesn’t want me back there.”

“Where are your bags?  Where is your car?”

“I have a motorcycle.  I told her I’d get my stuff later this week.”

Ramon shook his head.  “You got kids?”

The question stabbed at Danny’s heart.  His daughter, born earlier in the year, died when she was 100 days old.  She had never completely matured in Shawna’s womb and she was born a month early with a host of health problems.

“My daughter died,” Danny said without thinking.  He never brought this subject up; never discussed it.  Not even with Shawna.

“In April of this year.”

“Thanks.”  A terrible sick feeling came over Danny and he felt like vomiting.  Instead, he said thank you again and  left the pickup, going toward his sister’s porch and collapsing in the chair.  How could he leave her?  How could he just give up?  Were alcohol and drugs the only thing that could make the pain go away?

“Hey.”  Danny looked up to see Ramon standing there next to him.  He looked remarkably dry and Danny felt drenched.

“I know this sounds awful, but I can’t leave you here.  Tonight my wife is making carne asada.  Do you know what that is?  It’s a marinade of beef with orange and then roasted a little.  We pull it apart and have with tortillas.  It’s awesome.  After you eat, you come with me and I’ll bring you back here.  Or to your house.”

“Alright.”  Danny sat on the chair, unable to say no.  He was bankrupt with nowhere to go.  He held the dry cleaning, even thought the outside wrapping was tearing and wet.  It was the suit he was supposed to wear for tomorrow and maybe it could dry off as he ate dinner.

“Okay, buddy.”  Ramon helped him to his feet and as he stood, Danny was surprised to see he was taller than Ramon.

How could that be?
Posted by Brazen Princess at 1:23 AM