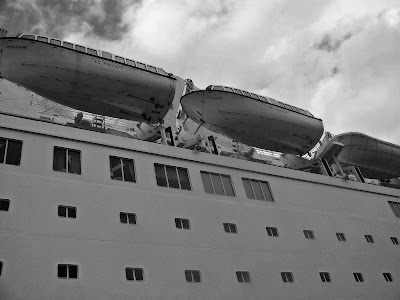 As I stepped onboard I thought of all the ghosts I was leaving behind - there were so many.

Six months before the cruise, Aidan served me with divorce papers without much warning.  To add catastrophe to this injury, my best friend, Gigi, was diagnosed with breast cancer the next day.

“He doesn’t deserve you,” she said, sitting on the white paper lining on the doctor’s table.  I had accompanied her to a doctor’s appointment after Gigi’s first two mammograms came back with “abnormal” results.   Instead of being concerned about the procedures she was facing that day, Gigi’s heart of friendship shone beautifully for me.  I still remember her clearly: trying to console me as she wore a faded peacock blue hospital dressing gown that tied in the front.

After the sonogram neither of us talked, and we both knew we were doomed.  She was, because her cancer was stage four; I was because I was going to lose both my husband and my best friend.  It didn’t take long for Gigi to succumb to the cancer after she decided not to treat it with conventional methods.

At her funeral, her mother wept so hard that I had to hold on to her so she wouldn’t fall to the ground.  Gigi’s father, who had left her only two years before, was stoically watching the outpouring of grief from across the casket, with his young, red-headed bride.

Aidan actually showed up with an umbrella, just in case it rained.  When it did, he opened the black, ominous cover and stood under it smugly staring at me.  He was right about the rain; and he was protected.

The downpour brought my own uncontrollable tears and the priest performing the service raised his voice and finished strong as we all got soaked.  Gigi would have been laughing her head off.

A week later my boss, Celeste, called me at home, where I had been in bed since the funeral.

“It might be time for you to find something else,” she said, perkily.

I looked up the clock, partially obstructed by stuffed animals and a comforter.  “Maybe.”

“Do you want to find something else?”

“Maybe.”  I yawned and watched the second hand drift aimlessly around the clock again.

“Because if it was me, I wouldn’t just lie there in bed.”

“I don’t feel well,” I attempted to convince myself as well as Celeste.

“You’re not going to feel better lying in bed.”

“Do you want me to come over with coffee?”

My breath got caught in my throat.  “What?”

“Do you want me to come over with coffee?” She said it louder, like I had a hearing problem.

I listened to her reasoning and wondered why she thought I couldn’t drink coffee in bed.  I glanced at my nightstand and saw several cups, some of them only half-drunk.

I heard a click and I sighed aloud, angry that Celeste was coming over to see my dirty apartment and smell my stench from my unbathed body, four days in the same pajamas.

By the time she came over, I had taken a shower and actually made my bed.  I was surprised that  she actually had coffee with her.

“This one is a vanilla latte and this one is a regular drip coffee with two creams and stevia,” Celeste pointed to tall paper cups with cardboard sleeves.  I could smell the latte and helped myself to that one.

“Thanks, Celeste.  You didn’t have to do this.”  I sipped, and the beauty exploded in my mouth: a rich warm vanilla coffee with hot milk and sugar to make it go down like dessert.   “Yum.”

“Yum,” Celeste was watching me and smiling.  I suddenly got self-conscious.

“I’ll come to work tomorrow,” I said, a little embarrassed.  I thought that she would leave if she saw me showered and out of bed.  Instead, Celeste sat down on my couch like I invited her to.  I sat down in my chair, cradling the latte between my palms.  “Really, I’m fine now.  This helps!”  I lifted my paper cup in her direction.

“When did your Mom die?  Was it this time last year?”

Celeste knew damn well when my Mom died.  It was right after New Years and I was paralyzed and grief-stricken.  Aiden was a cold fish who comforted me with the same skill a pizza would have.  I wondered secretly if he was even human.  If he was, I was sure he had never lost anyone close to him.  It also secretly surprised me that I didn’t know if he ever had.

“My mom died right after New Years, Celeste.  I think you remember that.”

“I do, sorry,” Celeste nodded thoughtfully, punctuating her sincerity.   She was wearing pink Chanel, her blonde hair styled to have as much volume as possible.  Even in my shabby apartment, she looked every bit the travel agency queen that she was.  She had built an empire by being thoughtful and personable; here she was delivering latte to one of her salespeople.  “You were out of commission for awhile back then, as well.”

I didn’t think it was possible for me to feel sadder than I was, but my heart took a dip into the nether regions of my chest, feeling punched hard and irretrievably sunken.

“I think it’s time for you to get away.” Celeste placed the drink holder on my coffee table and opened her bag to fish out an envelope that she handed to me.  “You’re leaving tomorrow for a cruise to the Bahamas.”

I looked through a wall of fog to see her, pink lips smiling at me like I had just won a sweepstakes that gave me a mothers, husbands and friends.

“What?”  I didn’t even want to leave my apartment to go to work. I couldn’t imagine getting myself packed and getting myself to the dock, only to stand in line with travelers – suckers who actually spent money on the tickets that Celeste was giving me.

“You leave tomorrow at noon.  I’m driving you there myself.  I’ll even wait with you in line.”

Celeste left the couch and oddly knelt in front of me; she smelled like soap and powder.  “It’s not a request, Jeanine.  You need to go somewhere and leave behind all of your ghosts.  When you come back, you can actually grieve without them.”

The line to the ship was long and I wore a straw hat that Celeste gave me.  She babysat me in line until she could take me no further, and waved to me like my mother did when I went off to school .

“Remember to board the ship without them!” She yelled, waving in full arcs with her long, graceful arms. I tried to smile.

The serpentine line was filled with people who were anxious to get on board.  Some were hot and tired; others looked hopeful and full of promise.  Some had children, others pushed elderly parents in wheelchairs.  A woman in front of me had a suitcase with a missing wheel and the same hat that I did.

I watched them all, winding their way toward the front of the line, a customs officer and a cruise agent ready to check their paperwork and passports.

Each step toward the boat frightened me.  I knew Celeste was right; I had to leave them all behind.  She had cursed me with her parting words: “Remember to board the ship without them!”  Why was grief so hard for me?

I remembered my childhood cat, Lacy, curled under our tree, stiff with the death that stole her from me.  I remember running in a crazed panic to my mother who held me as I shouted “No, no, no!” through tears at the sky.  I remembered my fourth grade teacher leaving our school in the middle of the year for a job in California and hiding until the principal found me, crying by the incinerator.  I remembered the death of my grandparents, breaking up with ex-boyfriends.  Finally I allowed myself to remember losing my sister to leukemia.

I could never really say goodbye and instead of grieve, I chose to carry pieces of people with me.  Now I was buckling under the weight of all of my ghosts, people who would have shuddered at the thought of crippling me.

I sucked a balloon of warm air in, and imagined myself exhaling the memory of my cat and seeing its ghost fly away.  I felt like I betrayed her, and imagined myself becoming cold with forgetfulness.  If the thought of leaving behind the ghost of my cat brought up so much pain, how much more would I feel leaving my mother behind on the dock?

By the time I got to the customs agent, I was choking on tears.  He said nothing, only stamped my book and smiled.

I walked toward the ship and refused two photo opportunities before picking up my complimentary island cooler in a tall plastic cup.  I threw the decorative straw umbrella on the ground and drank most of it down but I still couldn’t stop crying.  The gangway to the ship echoed under me and I felt myself moving faster, propelled forward by a sickening hope that I would soon be free of all of the abandonment that plagued my life.

“Welcome aboard!” the uniformed man beamed.  Once he saw my face he stopped smiling.  “Don’t worry, Miss!  This journey is a pleasant one.”

I nodded, and I was grateful that the photographer didn’t demand a picture.

As soon as I felt the threshold under my feet, a painful freedom flooded my veins.  I felt lighter and hopeful and I looked behind me to see nothing more than other passengers waiting for me to move forward.

As I stepped onboard I thought of all the ghosts I was leaving behind - there were so many.

Posted by Brazen Princess at 11:42 PM