Jin Campaigns Against the Song Dynasty 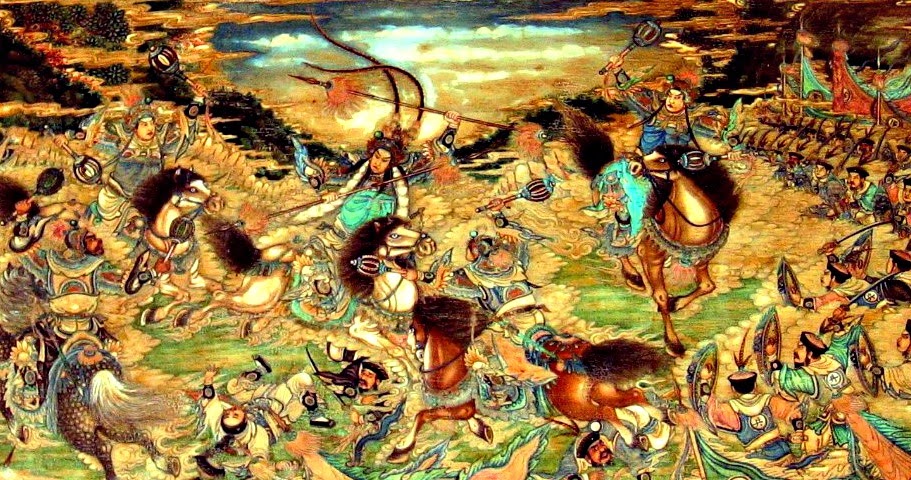 Dad and Mom are yelling at each other again in the living room.  I’m in front of the computer in the office, even though I know Mom will come in here soon, breathless and angry and tell me to move.   I have a chance of keeping my seat in front of this screen, something that holds my attention through it all.  After all, I’m working on a report for history that is due tomorrow and it has to be perfect.

It has to be perfect….

Dad is yelling about how Mom doesn’t listen to him and Mom is saying he doesn’t make enough money.  Dad’s electrical business has gone down the tubes this year after the big store moved in and took most of his commercial clients.  Now his days are fractured projects, running from place to place on smaller jobs.  Jobs that Dad says should be done by someone’s son or brother.

I am at war myself, right now.  My enemy is a super-brain named  Steve Yakashima and we both want the title of Valedictorian.  He’s probably going to get it.  I’m a typical American girl, my high school life a frenetic mess of academics and AP courses.  I still try to have a life with my friends which takes time…. Then there’s my life at home.

I know Steve has his own ipad and can probably study in peace at his house.  He seems to have no life at all outside of school and very few friends.  Also, I know his parents are peaceful.  They pick him up every day from school in a pale blue van - always together.

I don’t remember the last time my parents have driven anywhere together in the same car.

I’m looking at a map of China while my parents fight.  I’m trying to write a report on Jin campaigns against the Song Dynasty, wars that lasted a little over a hundred  years from  1125–1234.  These wars were especially strategic and bloody and were all to possess  land that we now just call China.  It was all between two families (or dynasties) that warred for land - The Song (in the Southern part of China) and the Jurchen Jin (in the North).  If you can imagine it, they actually used to be allies.  They had joined forces against evil overlords, their common oppressive enemy: the sovereign Liao Dynasty.   Once they defeated the the Liao, they celebrated together and decided to split the land between them.   After a series of failed negotiations that embittered both sides they turned against each other and began a war that lasted for more than a hundred years.  Both sides had an empire and an Emporer, but it wasn’t enough -they wanted everything.

Eventually (to ensure victory) the Song formed an alliance with the Mongols and the Jin Dynasty collapsed.  After celebrating the end of the long wars, the Song Dynasty itself took over the land only to become a target of the Mongols.  The Song Dynasty fell in 1279.

I can’t imagine fighting a war for years and years.  At least three generations living with enemies warring over land.  The bitterness keeping them at war could have been used to train a mighty army that they shared.  The ground they fought for could have been claimed as a shared China.  Instead, it fell to the Mongols….

Now my Mom is crying.  She is telling my Dad he needs to find another job because she can’t do this anymore.  Dad is asking her what the hell she is talking about again.  They don’t listen to each other and they have ceased to be allies – they are now at war.  They have been at war for a long, long time.

Dad is now telling Mom that he can’t help it if there are cheaper electricians that cut corners.  He will continue to use high quality parts and lose money because of it.  Mom is crying and I hear her muffled insults.  Dad is still defending himself.

I am printing my document without a happy ending.  I look past the ancient printer to see a picture of my Mom and Dad smiling in a yellowed wedding portrait.  Underneath the frame, there is a caption: “What God has joined together let no man separate.”  I have wanted to bring the frame to both of them and demand that they remove the yellowed picture and replace it with a newer one of the two of them, but they don’t have any.  They don’t take pictures together anymore.

How can a union that they once believed was sanctified in both of their hearts now be one that is a series of campaigns against one another?  How did they become the Jin and Song dynasties, warring for a piece of land that they claim to be their own.  "This is why I'm right!  This is why you  should listen to me!  I just want to be understood and respected!"

Sometimes the history of war teaches us that the land we are fighting for can actually be shared.  It can actually belong to both parties willing to live together in peace.  If those parties used to be allies, shouldn’t they be able to be allies again?

After all, you never know when the Mongols are coming.

Posted by Brazen Princess at 11:50 PM