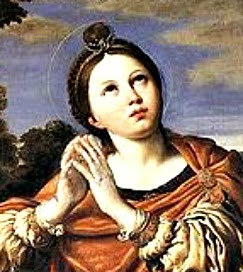 Agnes was a girl born in Rome in the year 291 when it was a very hard time to be a woman.  Her name means “pure, chaste, and virginal” in Greek; in Latin it means “lamb.”  According to her story, she was very much all of these things, but her story isn’t a pleasant one.  You may not want to read further if you have a weak constitution or a penchant for happy endings.

Let’s set the stage a little.

It is Rome, and the ruling government is the Empire,  busy slaying the enemies of Rome all over Europe: in Persia, Egypt and the East.  A new emperor had just come into power – Diocletian.  The former cavalry commander in the army of his predecessor, Emperor Carus, Diocletian was proclaimed emperor after the slaying of Carus and his son Numerian, on campaign in Persia.  The religion of the day is worship of the Emperor an it was very unpopular to be a follower of Jesus Christ.

In the civilized society of Rome, Christians were persecuted for their faith.  Many were martyred by being burned at the stake.  They were seen as foolish zealots set to overthrow Rome from within, so most practiced worship in secret and lay low.  Even the nobility joined secret to prayer meetings, remembering the work of Christ through communion.  Since most people at the meetings couldn’t read, the ones who did read aloud the letters of the Apostles or one of the Gospels.

Among the royal family in Rome was a girl named Agnes, whose parents were part of the secret church.
This girl, by all accounts, was a beautiful blessing, full of love with a heart set on pleasing God.  Even as a child, she was noted as “set on martyrdom” and determined not to  marry so she could live a life set apart for Him.  Because of Agnes’s wealth and position in a noble family, her decision wasn’t a popular one and the reasons for her decision had to be kept private.

Male members of nobility, hoping to get a chance at securing their fortunes, were determined to change her mind.  At the age of eleven she had many suitors, each of them pledging their undying love -although they didn’t understand her extraordinary choice to be chaste or live a sanctified life.  The suitors didn’t change Agnes’ resolve and soon a rejected nobleman discovered that Agnes was a Christian, meeting in secret with others to worship someone other than the Emperor.

So, at the age of thirteen Agnes was arrested and put to death.

Not much of what happened is written anywhere.  Some of the stories say that the governing Prefect, Sempronius, condemned her to be dragged naked through the streets to a brothel.  Some say as she prayed, her hair grew and covered her entire body, removing the shame of her nakedness.  Her virginity, these stories tell, was supernaturally protected.  Men who would try to touch her would go blind or mentally ill.  She healed one of them, in grateful remembrance of her own salvation.

Tradition tells us about an unsuccessful attempt to burn her at the stake.  It is said she was raised on a pole before a crowd, horrified at the thought of a child martyr.  To even further confuse the usually enthusiastic spectators, was that she spoke in such humility.  “You may be able to kill me but you will never change my heart which is set apart for Christ.”  The fire they stoked would not stay lit and once it did, the flames parted away from her.  Both she and the crowd patiently waited until the soldier was ordered to behead her where she stood.  Unable to sever her head, the guard  finally drew his sword and stabbed the child through the neck.

The horrified crowd left, heartbroken at what they had just seen.   It is said that Agnes’ public death proved to be something so hideous to them that it began to turn the tide of persecution of Christians.  Agnes was the first and last child martyr of her time.

In paintings, Agnes is portrayed as young, virginal and with a lamb.  Some historians suggest that the lamb represented her name, or being youthful.  Many believe that the lamb represents Jesus – the Lamb of God.
Today is Agnes’ day, celebrated world-wide by the Catholic Church.  She is seen as the patron saint of rape victims, virgins, young girls and chastity.

Regardless of how we believe or what we champion, Agnes’ story is told to show us what culture and governments can dictate and how we can live (and even die for) our faith.  Even against the greatest oppression, there is always a way to have hope and peace within.

Posted by Brazen Princess at 1:44 PM