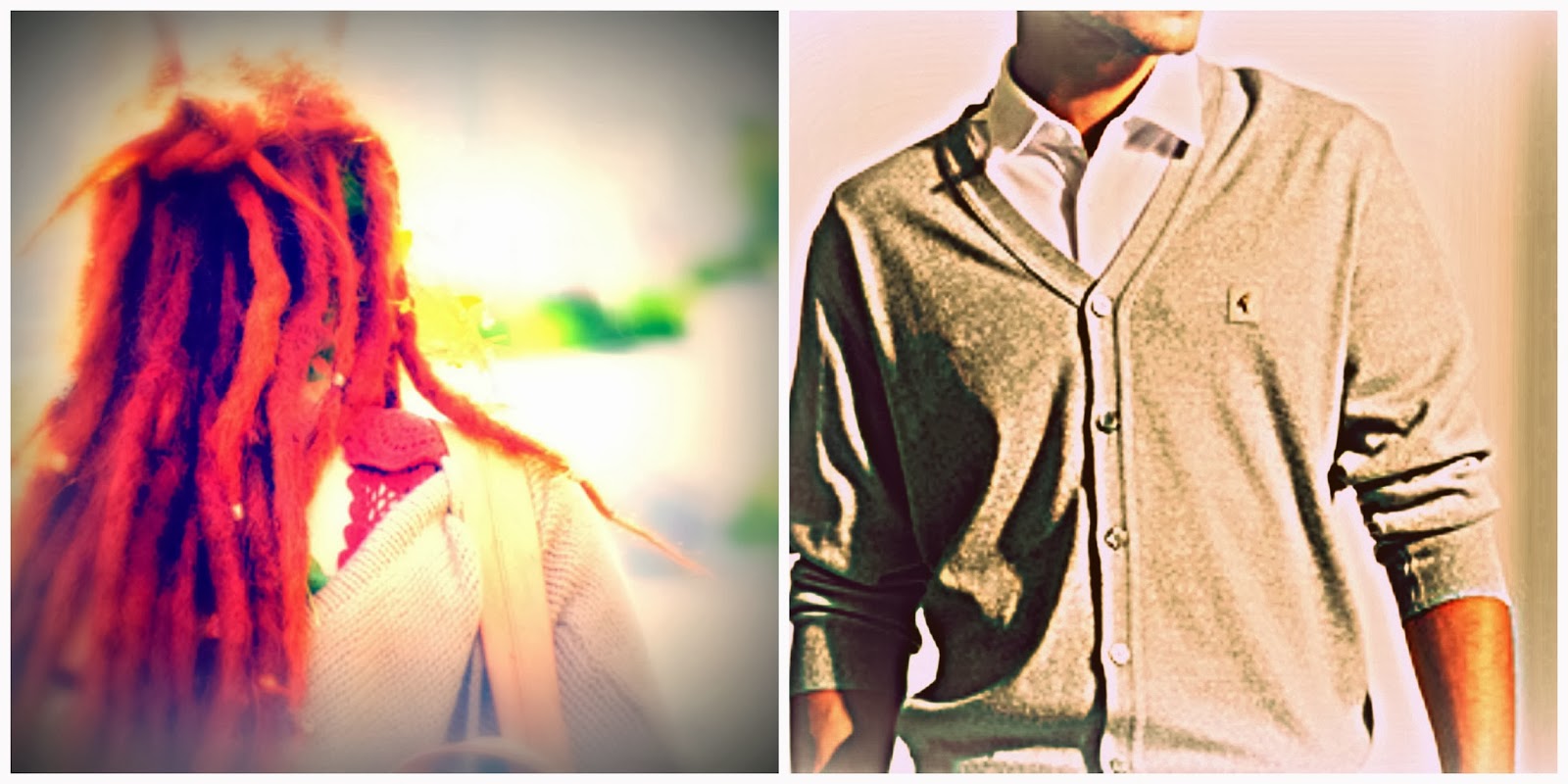 She glanced  in horror as  the dish fell from her hands.  After picking up the pieces, she turned her eyes again to Ebony who was now fixing a bowl of muesli, like nothing was wrong. He was wearing a pair of slacks and a cardigan sweater over a white shirt.

“What the hell are you wearing?”

“What?” Ebony looked over his glasses at April, who looked at him as if he were holding a pig’s head, dripping with blood.

“Why all this negative energy?  My mom gave me this for Christmas, you know that.”  Ebony looked down at his bowl and continued morning breakfast preparation.  He reached past his horrified girlfriend to open the refrigerator and get the carton of oat milk.

April nearly dropped another plate.  Who was this stranger in her kitchen?

Ebony looked up at her before taking a bite of his muesli.  He hated soggy muesli and he wasn’t about to defend his choice of clothes to his mate of six years.  She was sure to know his heart after all of this time together, he thought.

Today she was just overreacting.

She stood before him with her hands on her hips.  She was wearing her favorite cotton jumper and muslin apron, a picture of organic beauty and truth.  Her stunning red dreadlocks, intentionally formed after years of care and careful backcombing, were the glorious mane she had always wanted.  Today, they punctuated her horror.  Her grey eyes were now filling with tears and she put her plate down and left for the garden.

Ebony watched her walk away, an orange silk ribbon she had tied to her apron following her.  She picked up her strawberry basket and made her way to the cold frame.  Ebony knew he would have to follow her, even if it meant being late for work.

He stuffed three more spoonfuls of muesli into his mouth before putting down the bowl into the sink. He opened the screen door and followed the pebbled pathway into the garden, instantly surrounded by green beauty and the smell of fresh compost.  He found her, looking at the cold frame, a broken spirit surrounding her.

She faced him and he knew the damage was worse than he thought.  Her face was red and he knew the panic-stricken look of pre-explosion.  April exploded when she didn’t understand something.

“Next thing you know you’re going to make me call you Paul!  And... and… and then ask me to marry you!  Then vote Republican!”

Ebony (formerly known as Paul before his spiritual awakening) was stunned.  The damage was indeed worse than he thought.

“Baby, you know that’s not true!” He took a step toward her but she backed away.

April’s face dissolved into creases that accompanied terrible grief.  “You’ll be celebrating weird random days like birthdays and Christmas, rather than every single beautiful day we are given on this earth!” Her tears were coming strongly now.  “We’ll have dinner parties and cook things with bleached flour.”

“Don’t act like it can’t happen, Ebony!”  April was shouting now and Ebony looked toward the neighbor’s fence.  Their Labrador was starting to bark, sensing the negative energy coming from  their yard.  “Don’t try to be all innocent!  You’re the one wearing that…”  April could not finish her sentence and broke into sobs, clutching her strawberry basket against her stomach.

Ebony looked around and then took off the sweater.  He hated the sweater now, since it was making her cry.

“No!” she shouted.  “DON’T DO IT!!  Don’t pretend like you never did it in the first place!  You love your father and his clothes and you want to be just like him.  You want to own me and control me and…” April wiped her running nose, a string of mucus followed her fingers.

Before he could offer her his handkerchief she reached back and grabbed the orange silk ribbon, wiping her nose clean on it.

“No it’s not, Ebony!  It’s all this worlds’ fault.  It’s a world of stupid traditions where people buy cheap clothes from forced labor and then say they saved a couple of dollars.  I don’t want that world to invade my world.”

When he said this, April looked up at him, softening.  Ebony realized he should keep talking.

“It’s our world, baby.  It’s our world of celebrating each day.  It’s our world that rejoices in each season and celebrates our universe.  I need to get to work, but I swear as soon as I get home I will burn this outfit and we’ll sit and… blow this energy away from us.”

April looked eight years old, kicked around on the playground, but she didn’t say no.

She looked into his eyes and he loved her.  She really was a little girl inside, a girl who depended on him for truth and beauty.  He wondered if he would ever be able to be enough for her.

He reached for her hand and she met him halfway, letting go of the strawberry basket’s handle for a moment.  His hand was strong and warm and his touch made April think that she might have overreacted.

“I say yes, too.”  He smiled at her and she nodded again.  He turned away and walked back toward the house before turning back to her.  “I get off at four today.  Are you going to harvest anything?”

April looked over her shoulder at the pole beans, possibly one day shy of perfection.  “Probably not.”

He smiled and nodded and walked away, thankful that at least for now the damage was minimized.

As he cycled to work, Ebony  made a mental note never to accept a gift of clothing from anyone who didn’t embrace their core values.  Maybe, he thought, he could go one step further and return the clothes for the cash.  He would have to explain it all to his mother, in order to get the receipt.  She would be angry and tell him he married a lunatic.

Poor Mama, he thought.  She still thinks April and I are married.
Posted by Brazen Princess at 2:06 PM

Email ThisBlogThis!Share to TwitterShare to FacebookShare to Pinterest
Labels: fiction, five word prompts, She glanced in horror as..., Special thanks to Michael Roome