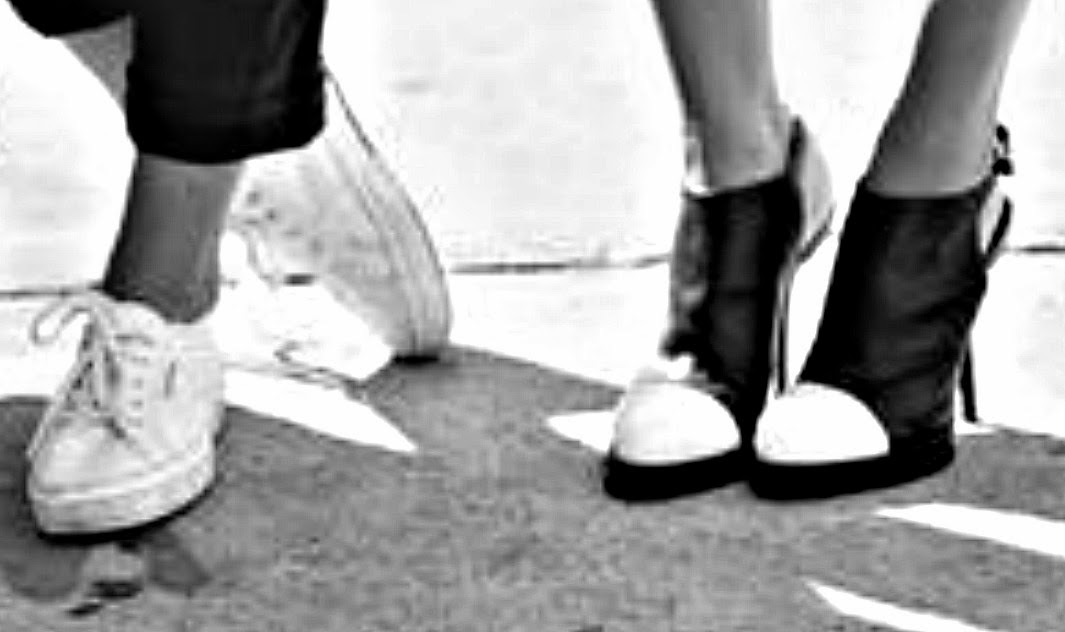 Black’s Mortuary stood like a medieval castle, crafted from grey stone arching over heavy black doors. Roberta waited on the steps while her husband, Phillip, parked the car.  The downtown streets were now all metered and Phillip refused to pay for parking at his own brother’s funeral.

Roberta adjusted her smart black slacks in the long shadows of four o’clock, the fading sun slicing through the tall junipers and hitting her white tennis shoes.  She almost didn't wear them, but realized she might be playing with the kids afterwards and in the end chose function over fashion.

Her brother-in-law, Charlie, was now gone and she thought of how quickly he was taken from them.  First came his headaches, then a diagnosis of a brain tumor in October and then hospice.  It was early January and this was the day of his funeral - he was barely 35.  His wife, a French immigrant named Pauline, and his two small daughters, her nieces Camille and Claudette, were devastated.  The family car had just dropped them off and they were already inside.  Phillip and Roberta's car had followed them, but now with the parking issue, she was separated from her husband. She grew impatient waiting.

Roberta was suddenly distracted by a figure in a black lace dress and high heels, running daintily toward Mortuary, high heels clacking up the sidewalk.  The woman’s face was an inverted triangle, her lips, a heart of pink and her eyes covered with wide, black sunglasses.

Roberta’s heart sank.  She scanned the street for her husband but he was still not visible.  For a moment she thought of ducking inside to avoid Denise altogether, but then realized that was stupid.  She would be forced to greet and acknowledge her sister-in-law, no matter how much they disliked eachother.

Denise was married to Phillip and Charlie’s “other brother” Craig, who was currently in a rehabilitation clinic (his fifth), trying to recover from alcoholism.  Roberta didn’t like the fact that Phillip was picking up the tab for this round of recovery; she had even less regard for his wife, Denise.

After all, she wasn’t even family.

“Hello Roberta,” Denise said, climbing the grey stone stairs and stopping in front of her.  Roberta smiled and hugged her without much enthusiasm.

“Are you here alone?  Do you want to sit together?”

“Phillip is parking the car,” Roberta said coldly.  The air between them was uncomfortable, but Denise tried to lighten it.

“I suppose that you’re going to sit with the family, right?”

“Maybe I'll walk in and sit with you."

Roberta tried to smile, but it was useless.  "I'm waiting for Phillip..."

"Look, I know this is awkward, but we're family, right?"  Denise was starting to tear up.  "Why don't we just try to get along?"

Denise nodded and wiped her eyes.  “I’m sorry.  This whole thing has hit me so hard.”

“Well, remember, this is Charlie’s funeral.  This is HIS family’s day.  Of course you have every right to be here, but try not to be so…”

“So what?”  Denise removed her dark sunglasses and revealed a piteous expression.  Roberta couldn't feel sorry for her.

“Remember that we have to respect the family."

"I respect the family, Roberta!"

"You're just saying you wish I wasn't around.  You won't ever come out and tell me that to my face, but you are saying that, aren't you?"

"This is it!" Roberta clapped her hands and then held them out to Denise, showcasing the drama.

"Remember my wedding to Phillip?  You and Craig got so drunk that you went out on the ballroom floor during our spotlight dance and were laughing and ...”

“Really?  Are you still holding that against me?”

“Don’t be like that today.  This funeral is like a spotlight dance.  Don’t get drunk!  Don't start crying.  Don't sniff glue in the bathroom so that you’re seeing pink elephants and reaching for the homemade shanks in your purse.”

As soon as she said it, Roberta realized it was too much.  Even the drama princess, Denise, looked shocked.

“I knew I shouldn’t have come.”

“But Craig asked me to.  He told me ‘Please go to my brother’s funeral just so Mom can see you’re there representing us.”

Roberta shook her head.  “Give me a break…”

“And here you are, judging me before I even go inside…”

“I told you we’d pay you back…”  Denise started, but then gave up, tears welling up in her eyes.

“Just don’t cause a scene.”

“Hi, Denise,” Phillip said, bounding up the steps and joining the conversation before realizing it was filled with tension.

Denise looked up at him, tears still in her eyes, and nodded.  Then she whispered to Roberta.

“The next time you don’t want me to make a scene I suggest you not accuse me of being a drama princess who gets drunk and owes you money.”  Denise put her sunglasses on and walked inside, opening the heavy door with some effort and disappearing into the darkness of the room.

“Where were you?” Roberta whispered, loud enough for a young couple just arriving to hear.  She hit her husband’s arm, and then looked at his suit.   “You look so wrinkled.  What happened?”

“I had to run five blocks to get here.  What happened with Denise?”

“At least pull up your socks and straighten your cuffs.  My gosh, you look like a hobo!”

“A hobo?  What happened with…”

“Oh, you know her!  Always some drama about something!”

Phillip bent down and pulled up both socks and straightened the hem of his pants.  Once Roberta thought he looked presentable they entered the darkened Mortuary.  The organist was playing “I’ll Fly Away,” as they walked into the sanctuary.

Denise looked up at them as they passed her, taking their seats in the front benches where all the family sat together.
Posted by Brazen Princess at 11:35 PM