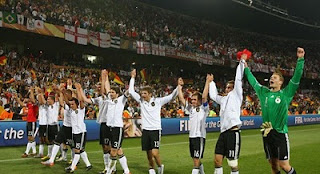 
I just talked to my dad on the phone the day before yesterday.  "So, how's the world cup treating you?" he asked.  I smiled, and told him he would have no idea how much it has affected us.  Literally.

The last game that South Africa played was vs. France on the 22nd of June (5 days ago).  South Africa upset France (3-0) and scored two goals within 20 minutes of each other.  I was driving my friend, Monica home to Cosmo City, and suddely saw people in the streets, blowing vuvuzelas, dancing, lifting up their hands, screaming, cheering, smiles that radiated... sheer happiness.  All because of a goal...  It is an image that will be etched in my memory forever.

There's nothing for me like watching TV and seeing my countrymen cheering for your our home team.  They do the familiar things I've seen done in every pro sports game in the States, but nowhere here.  They pulse with a familiar clueless, fearless happiness that makes us seem arrogant to the world...it's just who we are as Americans!!

Our national flag....?  Don't most Americans know FLAG RULES??  No toughing the ground...no wearing as a garment... no acting like it's a cape...?   I guess not.  Being outside of the States the flag police don't follow you.

What rips my heart up is seeing the Mexican fans.  Almost everyone looks familiar, maybe because we're from California, but also because my family genes are so heavily Mexican.  Right now, as we speak Mario is watching the game for Mexico vs. Argentina.  Argentina is ahead 2-0 and I don't have the heart to watch anymore.

Still, we are having a rip-roaring good time watching soccer here, but I hate to see loss...witness it first-hand.  Especially on this level.

The World Cup is bigger than the Olympics in most underdeveloped countries.  They see it as a chance for their team to bring their country dignity.  It has to be one of the reasons I root for the poorest country.  Truthfully, I didn't know who to root for when the USA was playing the LAST remaining African country in the Cup, Ghana, a country with so much poverty (About 28% of the population live below the international poverty line of $1.25 a day) that the USA seems like giants next to them. Still, soccer equalizes them and the field becomes its own country, each inch being contested territory.  In the ninety minutes of play, the only thing that matters is strategy, endurance and teamwork.  The refs are thrown in to make the game interesting, but most of time they just make us angry!!


As far as the love of the game, I have almost none.  I am caught up in the superhuman desire of the players to play well and to win.  The fans are next in my heart, all cheering (in the flipping freezing cold) their beloved teams with fervor that would make cheeseheads blush.  The whole atmosphere is beautiful here.  Cars are flagged out... people are dressed head to toe supporting.  Tonight at church a young friend was wearing a pancho.  A real one.  I was so jealous, and so encouraged at the same time.


We have welcomed the world here...and it's been wonderful.


We still have two weeks to go-- I'll keep you posted as much as any girl (who doesn't care for soccer) can.

Posted by Brazen Princess at 12:40 PM