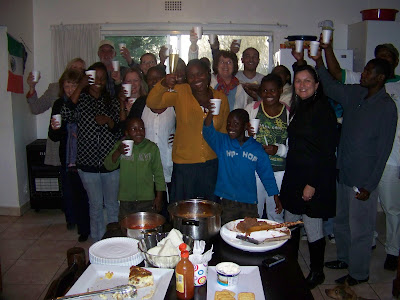 
Tomorrow Portia turns 30.  She's lived the life that most people live in 50 years.

Born in Zimbabwe, Portia immigrated to South Africa with her mother in 1997.  Her family came first, and as the eldest daughter, Portia did most of the raising of her siblings.  Each one came through appreciative and with a quiet grace that is beautiful and refreshing.

When she was about 18 she met Thembi, the man that would become her husband.  She married him 1999 and had Darrely when she was 20.  The baby was a joy to her, but soon after, Thembe became sick with an unknown ailment that they later would determine would be HIV.

An incredible man of faith, Thembe grabbed a supernatural healing on his deathbed walked out of the hospital after all the doctors said he was as good as dead.  Tested later, Thembe was shown as a healthy young male with no signs of HIV... and the doctors scratched their heads.  Nine months later, along came Ebineizer, and Portia and Thembe were put on to eldership at Junction Church.

By the time I met Portia she was 25, and a cute little mom with a couple of cute kids.  She had both peace and joy...and was a great singer who set the Spirit of God free.   Thembe was a legend in Joburg, as well as someone who became our angel who explained the varying Black African cultures.  We affectionately called him "our translator".  We planned a trip to Durban to see the ocean -- and took great delight that we would take him and his family to the ocean, a sight they had never seen.

As we grew in friendship, Thembe became sick again.  His sickness developed into AIDS and our whole church prayed... again.  Mario and the other elders took turns getting Thembe to the doctor, sometimes having to carry him out of the car and into an awaiting wheelchair.  As the church delivered prophetic words, we all had faith that this whole thing would be behind us and Thembe would become fat again!!

One day, from under a cover of a mass of blankets, Thembe asked Mario for a favor.  "I don't think I'll make it to the ocean," he said.  "But will you take Portia and my boys?"  Mario smiled and said "Thembe, when you get better, we're all going to the ocean.  You're not getting out of this."

To tell you the devastation we all felt when he died cannot be done.   The Junction was overcome with a crippling silence that can only be comforted with the knowledge that Thembe was in heaven... and had an instantaneous journey.  The memorial was somber, but beautiful  We had all known him to be a son...in the Father's house.  He was with Him finally....

Portia was inconsolable.  Even the strongest Christian woman doesn't come equipped to be widowed at 27.  Her two young boys were the apple of her eye, but she still felt devastated.  She felt ill-equipped to face her future.  In response to this, our church sent her to computer classes so that she could be even more marketable.  She took to the classes quickly, and found a new gifting: administration.  Her graduation led to a new job... new friends.

Within two years Portia looked different.  Her physique was sleek and polished.  Her friendships multiplied and she grew fonder of work...and began to focus on adding to her responsibilities.  She ran the till at Bloemfontein, a gathering of relating churches.  If Thembe was ever able to come back he would not recogninze her... but I knew God was pleased with her.

Tonight I sit here after a surprise birthday party we hosted for her.  Her friends and church family crowded our house, all grateful for her friendship and strength.  She is whatever any woman should want to be.  Beautiful; graceful; strong; an overcomer.  This coming Wednesday she will take her drivers' test...and I know she will pass.  She will be one of the few in Diepsloot that drive a car.   All of our friends gave her a contribution to buy her own car... soon after she passes.

Tonight is victory.  Portia lives in the now, after devastating losses that no one deserves.  She is a victorious person, regardless of her circumstances.  While others would have rolled over and gone into deep depression or alcoholism, Portia bounced back with hope and still has never tasted alcohol.  Tonight she toasted with sparkling apple juice.

A friend I can tell anyting to, she is irreplacable.  I love her like a sister...like a daughter, like a mother.  I partied tonight with her because God has not only seen her through, He has made her shine.

Cheers, Portia.  You're a treasure for this world!!
Posted by Brazen Princess at 12:11 PM