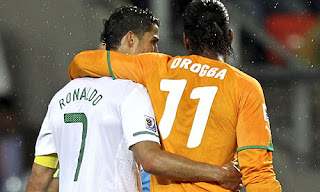 Some say that Cote d'Ivorie would never have become a real team had it not been for Uli Stielike.  Uli, a former football star in his own right began to coach the Cote d'Ivorie (Ivory Coast) team that was nicknamed "The Elephants" in September 0f 2006.  His expertise in football (soccer) was only second to his desire to win: an unquenchable desire to win at all costs with any team, anywhere.
Something happened to Stieleke and his family in 2007 that would change the fate of the Cote d”Ivorie team forever:  his son became drastically ill.  Not knowing the outcome or prognosis of a seriously ill family member is hard on anyone,  and Stieleke decided to leave his job to be with his family just before the 2008 Africa Cup.
After the decision, CIV had to do some fast shuffling.   Gerard Gili, the co-trainer, took his position. To compensate for the lack of another coach, Didier Drogba acted as a "players trainer" (player and a coach). This was only the second time that a player had also acted as coach in the Africa Cup, and Didier would, they say, never be the same player or man.
It caused a leader on the field to be a leader in real life.  His new role as team leader and co-coach was a witness to all kids in the small West-African country, and encouraged the whole team to step up alongside of him.
If you look closely from a fan’s perspective, Didier Drogba is one of the most respected players in the world.  He’s one of the world's best performers not only for Ivory Coast but also for his club, Chelsea.   If that weren't enough to rouse the spirit of most fans, many recognize him as a singer (a rapper) and also as a humanitarian.


Still, the reason that he is loved by fans all over is because he is uniquely personal, never forgetting them.  Even with a cup crowd, he shows his appreciation to everyone in the stands at every opportunity.   The press say he's a diva, but he's got that "normal guy from the same place you're from" likeability....


I like who he is because he seems so real, so ready to lead wherever he is.  With the tragic news of a loss of a coach, Drogba stepped up and caused a chain reaction in his team stepping up.   Today their team is known for having guts and determination in the face of adversity (Drogba just recovered from a broken arm).   They solidified in a time of crisis to be an underdog favourite in the cup today.

Speaking of today, Cote D’Ivorie played Portugal, with Ronaldo (the superhuman hero of football) and held their own, tying 0-0.   Many people thought it would be a shut out, but in true fashion for this team, Cote d’Ivorie held their own and played like men.   At the end of the game, Ronoldo payed his respects to him, perhaps wanting to catch some of his flashbulbs, so to speak.


Mario watched the game today, I didn’t.  Honestly, I  like the story, from a human perspective, and that's what appeals to me.
*smile*
For more info on the game check out
http://www.fifa.com/worldcup/matches/round=249722/match=300061489/summary.html
Posted by Brazen Princess at 1:54 PM