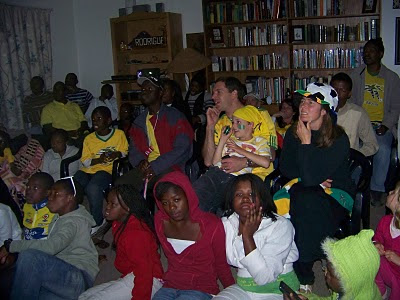 The living room as we watched the  South Africa vs. Mexico game


Today was a landmark day in the nation we reside in: the first game of the World Cup.

In our house, a buzz of activity as our friends came over to celebrate together and cheer on Bafana Bafana while I secretly rooted for Mexico to pull it off.   It ended in a tie ( a miraculous tie...1-1).

Our South African friends appreciate every nuance of football (soccer), just as much as Brazilians do, from my limited perspective.  Instead of shouts of joy when a goal is scored, there are shouts of joy when there's a good pass, a good call, a friendly smile at the camera.... and our house practically lifted from the foundations today with the partying going on.

As I painted kids faces with flags and color, shouts permeated from the inside.  It was magnificent and exhausting.

It's been a long and exhausting day.  We hosted people who came for soccer and also for food, so there was very little sitting down time for me (and Mario).  Everyone asked me if I was tired...I looked it from the pictures we took.   I guess I was, but I also think I'm still not used to a lot of cultural differences that make themselves known during large celebrations.

I also think of my expectations of this day...that we would all diski together and have lots of fun...but it was all about soccer...and everyone else was happy about that.  I can smile and reflect with pleasure, but at the same time, I wish I could relax a lot more than I actually do.

Tomorrow Mario takes Lebo, Honest and Chris to see Nigeria vs. Argentina, so they're spending the night.  Also, Portia and the boys are asleep in the next room.  Breakfast tomorrow is at 8:30, so I'm headed off to bed.  Having a party of this size is a joy, and exhausting.

Posted by Brazen Princess at 2:16 PM