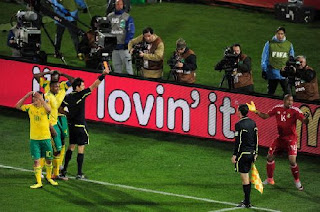 Tonight our friends Bonnie and Terry asked us to come over for fine fellowship, food and a World Cup game.  A public holiday here, Mario and I agreed, seeing as our regularly scheduled City Ministry Group (CMG) would need the night off.

We went over with a little dessert, some nice wine and Diet Coke... and looked forward to catch-up and fun with the Wiggels.  Dinner was great (Butternut soup and fresh bakery rolls), the conversation was excellent (also invited were T &B's friends, Gill and Gareth) but the game....

Tonight South Africa faced off against Uruguay at 8:30 in Pretoria.  It is freezing outside-not figuratively, but literally freezing.  A whole stadium of fans dressed in Yellow and green with matching scarves, vuvzelas, wigs shouted in eager anticipation.  Uruguay (a great defensive team) was about to meet their match in Bafana Bafana.

The starting lineup for both teams were eager and hungry, and went out well, faced off and seemed equally matched.  The play was incredibly exciting, and then all of a sudden, A goal out of nowhere for Uraguay, made by pretty-boy Diego Forlán, who looked like he was just running alongside the crowd around the ball,  five or six yards outside the box.   The positioning of the goal was breathtaking, the upper right hand corner, just out of our goalie's reach.  Even as we watched the replay, we kept saying, "Where did that come from?"
We realized the hush in the crowd, and could see the hunger stolen from our guys' faces.


Still, it was easy to bounce back and continue rooting for our guys, but soon the play turned rough and offsides and fouls were being "sold" by both teams, but especially from Suarez, Uruguay's captain.  As we watched, the Uruguyan team defended each part of the field so well, that our guys only managed to get a hold of good play on our side of the field.  Although still lively, I keep remembering that they are ranked 83rd in Fifa's world rankings, while Uruguay are 16th.


The point where I felt tension building in the room where we watched the game was when the Uruguayan Suarez began to "sell" fouls right and left.  One of our guys got yellow-carded, making it impossible for him to be in the upcoming match against France (he had been yellow-carded the last game).  Some of the calls I agreed with, but the South African contingency yelled out at the contentious Suarez "What a moofie", and "Get off the field!" South Africans are tough.


We all felt the pain of the red card -- the same whiny Suarez ran offsides feet first into our goalkeeper,  Khune, and was brought down by his outstretched boot.   We watched the ref run on to the field and pull out the fateful color...  I was waiting for the offsides call by another ref...or at least an outraged commentary by the comentators, but nothing.  Nothing.  Nothing but Khune walking off the field and the Uruguayans being given a penalty kick.  Our new goalkeeper, Moneeb Josephs, had to suit up so fast because.... NO ONE EXPECTED OUR GOALKEEPER TO HAVE EVER BEEN RED CARDED!!!


Diego Forlán, the same guy who scored the "goal of beauty" takes a penalty shot and easily makes it past our new goalkeeper- and I hate him for it.  He runs and struts around the field like the whole thing was fair.  He just was given the easiest, most biased call and he acts like he's done something.


At this point, with twelve minutes of play left in the game, people began leaving the stadium.  Our room is quiet except for the guys murmuring complaints against the call.  The shots that the camera makes are of disappointed Bafana Bafana fans.  I have a feeling the ref will need bodyguards to make it out of the stadium.


As if we are not winded enough, the ref adds five extra minutes to the clock at the end of 90 minutes.  Just before it ran out, Uruguay's Alavro Pereira scored from close range, making the final score 3-0....Uruguay.  The wind was knocked out of all of us, and part of me wishes I had never watched it.


As we leave, our gracious hosts, Terry and Bonnie, walk us out into the cold night air.  We make small talk talk about the weather (it's freezing!!) Bonnie's seedlings (we parked right next to them) and cycling (Bonnie and I make a date to go on a ride together).


When I got home, I tried calling the kids.  Neither was available for a phone call, so I began journaling, here on Brazen Princess.  I feel winded, disappointed.  Ripped-off.


I'm not even South African.