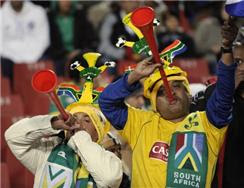 It is literally impossible to not think about soccer right now.  Even as I type I am surprised that my keys are still black and white and have not been redesigned to be the flags of the world or white with cool little octagons surrounding them.
Jozi has the fever, and I'm swept up into it.
I cannot believe that I am looking forward to the cup as much as I am... but I am.  I drive down the street and not even get angered when street vendors are blocking the way, selling flags, hats, noise makers and  vuvuzelas.


Anyone can stop me in the store and ask me where anything is, even the most obvious things,  like oats that are stacked to the ceiling, and I'll smile and point the way to them.
World Cup... the event I never, ever - even remotely- understood has come to this country.
The teams coming to the world cup are professional teams from 24 countries who have shown themselves to be the best in the world.  All except for one team: South Africa's.  Since we are hosting the game, FIFA (Federation Internationale de Football Association) has to let our beloved team play.
At our supermarkets (our main ones are Checkers and Pick and Pay) the clerks hope for our underdogs to show the world that we are no longer an insignificant African tip of a nation and instead a sport force to be reckoned with.  Our team has trained hard can hold the field with anyone now.  The reason? We’re pumped up!
Their name, Bafana Bafana, basically means “our boys”.  Umfana is the Zulu word for boy, Bafana means more than one boy.  The affection of that nickname says that these chosen 23 have been birthed by South Africa, and will make her proud.
To cheer them on, most South Africans will dance, sing and blow long horns called vuvzelas.  To make the noise desired from the chosen plastic flashy instrument, you seal the mouth over the end and blow!!!  This results in that trumpet or bugle note that is close to an airhorn.  Normally, it is a loud, irritating sound...but during World Cup season, blown by a South African, it sounds like victory!!
On Friday, the 11th of June, the opening ceremonies start at 3:00 p.m., but the first game is at 4:00, and our house is going to become a carnival of people, most speaking Zulu and doing the diski.
I’ll tell you what that is tomorrow.
Oh, and by the way, if you’re reading this, come over and party with us on Friday...and wear yellow...and bring cold drink.
Posted by Brazen Princess at 8:38 AM