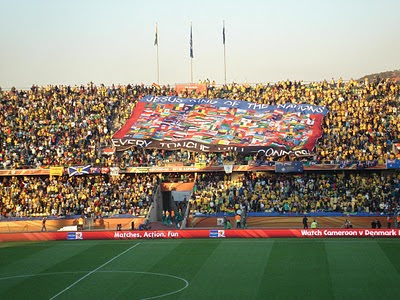 A flag flown in Rustenburg before the game, showing devotion to Jesus
We are now in the middle of the country in a city called Bloemfontein (Fountain of Flowers, in Afrikaans).  The charm and beauty of this city lies in its people; specifically our friends, Wouter and Lulu VanAswegan and their four kids: Daniel, Annie, Jack and Jessica.

We come here (four hours south of Johannesburg) about three times a year, not only for rest, but because the VanAswegans are the closest thing we have to family here in this country, complete with the yelling and disorder that comes with a family with four kids.   We have made a pact with one another that as long as we live in South Africa we will celebrate the fourth of July together with a BBQ (a braai).  This is a different something because here, in South Africa July is very cold and the days are short.

Last night the Daniel (17) had a freind (Jed) sleep over, Annie (15) also had an overnight friend named Nerica.  This held a quiet charm of teens having conversation about the deep and the shallow, both equally enthralling, especially to be let in on their chatter.  Jack (12) also had a friend (Kent) sleep over and Jessica blended in with everyone, since she has a quality of being 10 and 30 at the same time.

The day could not have been more unpredictable.  I got up dressed for a run and never went,. since Mario and Wouter left as soon as I woke up for a visit to Home Affairs.  I was left with the kids, since Lulu was at the dentist for a (painfully overdue) tooth extraction.

As soon as all the adults came back we went to a Nature Reserve on the outside of Bloem that turned out to be an all day excursion and we couldn't participate in the nature walk that we had scheduled.  Lucky thing, since Lulu could not move from her seat without pain and decided to sip tea in a neighboring tea garden.

We came back home and began the braai, as Jack and Jessica learned how to play horseshoes with me.   They ended up beating me (I refuse to hang my head in shame) and thoroughly enjoyed the game.

About halfway through the braai Mario emerged from the house and said "Brazil is OUT!!" meaning only one thing.... Brazil had been eliminated from the World cup quarter-finals.  A surprise indeed, even though matched against the Netherlands, the team that has polished itself to perfection.  Winning 2-1 over Brazil, my thoughts instantly went to the Roomes, our friends who lived there, and all of Brazil's fans who are our friends.  I imagined them being very disappointed, and I was sorry for them... although secretly glad Brazil had been knocked out.

Later that night (as I watched Ratatouille with the kids) Ghana played Uruguay and was beaten in a controversial game that Mario says will make history.

FIFA wraps it up like this:  "It was a moment to make history, and for a player to earn himself footballing immortality. It was the last minute of stoppage time in extra time at the quarter-final between Uruguay and Ghana. Luis Suarez had just been dismissed for deliberately handling a goalbound shot on the line. The score was 1-1, and the Africans had a penalty. Gyan, with two converted spot-kicks to his name at the finals, stepped up for the last kick of the match. He took a five-pace run-up and shot; the ball smacked the top of the bar, flew out of play, and the final whistle blew. Had he scored, Ghana would have been the first-ever African team to make it through to the semi-finals. But the beautiful game can be cruel too: the South Americans held their nerve and won the shoot-out. Coolly converting Ghana's first penalty in the shoot-out will prove to be no consolation at all for Gyan."

Mario came to bed a little crestfallen, as the only African team was now out.  I did sympathize with the plight, but even more so that my friend Lulu was tooth-ached and disabled from fun as we usually had; disappointed that we didn't talk to the Roomes or even SKYPE or facebook with them; disappointed that the warm holiday in the USA would mean family fun without us....

For the full FIFAarticle on the quarter finals go to:
http://www.fifa.com/worldcup/news/newsid=1266482/index.html#dreams+over+brazil+ghana
Posted by Brazen Princess at 1:50 AM