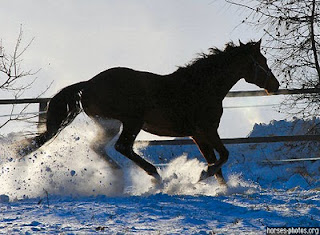 The first time I rode a horse was with my friend, Carol, who owned two: Lady and Vixen.  She was a real cowgirl and I was town, pretty feminine and unfamiliar of such animals.  I admired their beauty and admired Carol as she rode them, becoming one with "her babies" as she called them.

Her sprawling property was a treat for me to visit, and once when I was grooming her babies with her she asked if I would ever want to go on a ride with her.  I said yes, of course!!... and she willingly saddled for me the more docile of her two babes, Lady.

I mounted the horse with great ease and felt so natural as we trotted off the grounds and headed out to the open roads that surrounded her place.   Carol rode over to an apple orchard that neighbored their property, and Lady took off down the road in a fast trot, in the opposite direction.  I yelled for Carol, who didn't hear me.  I yelled again, and "Lady" broke into a gallop, her hooves rumbling against the soft pavement under us so fast that I panicked and grabbed the horn of the saddle for dear life, dropping the reigns.
Apparently Carol figured out what happened, because suddenly she was like the wind, next to us on Vixen, galloping alongside of her runaway horse with her blonde hair blowing and her face focused on the horse I was on.  She looked like a superhero... and rescued me by grabbing Lady's mane and pulling it against her and Vixen as she slowed to a trot, then a walk.
We were both exhausted and breathless when she corrected me "Janet...never...shout..on..a horse... It just...makes them...go faster...."
And so I never did again.  Shout on a horse, that is.
It wasn't until I was twenty nine that I decided to mount one again, at a dude ranch where we vacationed with our kids.  The horse was old and worn, but I shook as I rode, remembering my wild ride.  After the old nag, I was confident again that I could be able to ride a horse under the right circumstances.
In the Urban dictionary, the term"Get back on the horse" has two meanings:
1 (verb) To attempt the same challenging action after failure.
Apparently derived from an old adage: "You have to get back on the horse that threw you."
2 (verb) To get back into a habit. Traditionally a good habit.
I am officially "back on the horse" of blogging.
Nothing against the World Cup, but blogging became a duty...and my last post caused so much concern for me by well-meaning friends and family that the brazen princess was more of a wilted child after my last post.
Still, my habit of writing is a good one.  God created me to tell stories, I think.  I think I have confused being a good story-teller for being a good teacher, something I have always said I was.  As I get older, I want to be known.  I want to tell the story of my heart and tell it in such detail that it draws others in.  I want to write in a way that endures time and space and culture-- besides spreading the Gospel of Jesus Christ, it is my greatest wish.
In the last week I have either been to busy or too distracted to write.  Events.  Sadness. Life. I have felt like the picture of Iniesta has haunted my dreams... There has been no resolve, but there is hope.  There has been little change, but knowledge of the One who is my definition.
Today I write after failing to do so for a week.  I dropped the reigns... and now, rescued I get back on the horse and attempt to tell you all that I am back.  I want to tell the story of my heart.
Will you listen??
Posted by Brazen Princess at 11:12 AM