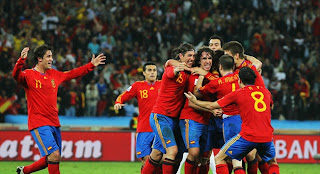 Tonight the mighty German team has fallen to Spain.  To say that I'm pleased is an understatement.

The girl who could care less about soccer (me) is elated that Spain has taken out the best team in the cup.  Germany is more deserving of Spain to be in the cup... That's right , I said it, and I recorded it in black and white.  Spain (in my opinion) is the next best thing to the USA winning, being exciting and filled with hopes against power teams highly skilled and trained.

Today the roads in Northern Joburg were closed because of a practice run on the freeway...practicing transporting dignitaries for the final game on Sunday here.  The police lined the entrance of the Indaba Hotel, a posh Northern Joburg place, with a dignitary bus in the driveway.  We thought the police were routinely stopping people, and readied ourselves.  No such (bad) luck.

Spain, the team, is very exciting - having such great players - and are European!!  The winners of past cups have been primarily South American.  Even so, among European countries, Spain's team has always been a "second team" to the superstars of Portugal, Germany and Italy.  In all respects, the Spanish are the underdogs of the whole tournament.

Spain is a country with soccer as its main sport.  The kids (all speaking perfect Spanish) are related by blood to the balls, goalposts and grass.  The only other sport that rivals it is basketball ( fast rising since ten years ago).  They have qualified for the World Cup twelve times since 1930.  Their best finish has been fourth place (1950).

Holland (the Nederlands) has its most popular sport as soccer (football) followed by field hockey and volleyball.  Deeply athletic, the country has sports clubs like America has churches, with  35,000 sports clubs in the country. About two thirds of the population older than 15 years participates in sports weekly - it's almost a religion.  In fairness, Holland has never taken a World Cup either, but have fought it out twice in the finals in 1974 and 1978 -- both lost to the opposing teams.


Needless to say, both countries are going crazy.


Apparently, there is a certain octopus that can accurately predict the winners in this year's World Cup...he has never been wrong.  Paul, the psychic octopus predicted the Spanish win over the fierce and strong team that Germany produced this year... and there have been death threats on him, poor guy!   Apparently the octopus is going to be captured and fried up with garlic and white wine.


Two teams with hunger, desire and talent will duke it out on Sunday. Drama, falling down, cheering, vuvuzelas...ahhhh, this is our moment!!

Posted by Brazen Princess at 7:20 PM