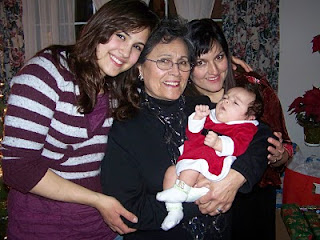 The day Alicia was born I had pancakes at Lyon’s restaurant on Clover Road in Tracy.

The doctors had sent me home because the pitossin drip had not worked (could have fooled me, it sure felt like labor!!). Since I had been fasting for a whole 12 hours I insisted that we stop at a restaurant on the way home to the Corral Hollow Canyon. The pancakes were delicious, but I had to stop every five minutes to allow labor pains to pass.

I should have known.

When I delivered her, 40 hours later, she came out “sunny side up” , face toward the sky, like she wanted to see her own birth. At the moment she made her full exit I looked up at Mario, who was nothing but tears, watching his first daughter be born. Our midwife, Arlaine, asked me if I knew what I had delivered...and I guessed a boy. Arlaine shook her head, indicating “no” (she later told me she was waiting for the doctor or Mario to tell me the news...our girl was born, but realized there was only one other option, and she was the bearer of the news) . I instantly hoped for the best. “Did I have a girl?? A girl?? Mario?....” Mario was cying his eyes out, and nodded. His hand was clutching at his mouth when I heard her first cry.

Twenty one years later, I stood in a similar delivery room with Alicia, the girl I delivered sunny side up, delivering her own child. I had watched her go through thirty hours of labor and two and a half hours of pushing . I never thought any birth could be more painful than hers. I was witnessing Harmony’s as she struggled to enter the world. The delivery room had Alicia, her boyfriend Brian (Bud), his mother, Suzanne; his sister Ashley; his step-father, Steve; and Alicia’s long-time friend Patrick...and me. I tried to silently be there for my own baby while she labored to get her own out. She begged the intern to give her a C-section, but she sternly told Alicia to push and stop whining. I could have assaulted the almost-doctor on the spot. I glared heavily at her...something I had saved only for the very worst of enemies.

Harmony eventually arrived, barely breathing and full of “terminal merconium”...and I began rebuking every dark force in the world that would try to steal the life out of this young one that came from my daughter.

My daughter had a daughter. I saw my mom two days later and took pictures of the most amazing sort: Four generations. The whole thing was surreal. The last time I had done this was when Vince was born, and I stood next to my mother as my grandma held the baby son I had delivered just three months before. Now I was the grandma. I have no desire to stay young...you can’t write worth a damn when you’re young...but I did have a desire not to lose my daughter. I felt like day by day she was slipping away.... but when did I not feel that?

Alicia has always been an independent sort.

At four she organized an outing with two girls across the street who were not allowed to go further than their front lawn. I packed a picnic lunch and saw her march across the street with it purposefully, and knock at the door as if she were a Publisher’s Clearinghouse Sweepstakes rep. The girls came outside for a second, then asked her back inside. She waved at the porch where I stood, and disappeared into the new neighbors’ house. I waited all of ten seconds before I went after her... and when I knocked on the same front door the neighbour answered. She was a small, beautiful Viet Namese woman, and said the table was a better place for the girls to share the lunch. I looked past all of the jade, bamboo and Buddha statues to my daughter, unpacking the sandwiches and handing them out to the girls. She waved me off saying “I’m fine, mom. Go home now.”

I stood on the porch, praying beyond my panic. What if they start teaching her Buddhist traditions?? What if she wants to have lunch there every day??

She didn’t and for a couple of seconds I relaxed.

At eight she had several irons in the fire. She was in a community choir, drama, a play group where she discovered an artistic talent... the other mothers called her “a handful” with smiles and fondness. I still took offense and told them all she was a great daughter, the most stable girl of any one I had seen in any group her age.
The same year she was diagnosed with type 1 diabetes...and my heart and life sank. I tried to adhere to the strict eating schedule and program that the doctors had given me. Alicia was compliant until it cam to diabetic ketchup. “There’s no way I am eating that!” She’d say, in a soft but firm voice. “It’s like eating red glue...” I never bought it again. Let her have Heinz, I thought. What will they do to me?

At twelve she was already turning heads of boys. No matter the looks I brandished, some of the boys would not look away. Alicia loved being admired, and didn’t listen when I warned her to “ignore the idiots”. “Mom,” she’d say, “you’re so judgemental!” Was it true? I don’t know, I just thought boys were of the devil...but I felt her slipping away.

At seventeen in Africa, a boy of 25 proposed to her. She agreed, and later asked us what we thought. I felt unnecessary...and grieved and longed for my baby back. Where could I go to get her back??

The love I feel for this girl is unreal. It kills me; stuns me; knocks me down from far away.

Today is her first Mother’s day and I’m not there for her. She loves me and misses me. I see her daughter, the amazing Harmony and I weep for loss. How am I ever going to get beyond this??

My Mother once told me that having a daughter was like seeing a reflection of yourself...but better. It’s true. To see Alicia I see great potential, a beautiful mind, a wonderful mother. I think of her today and think she has three times the strength I do, maybe more.

I should have known that first night when they said that inducing labor wasn't going to bring this baby out that Alicia would be waiting to prove them wrong. She has been the antithesis of pattern and predictability. No one can set their watch by her.

She was born sunny side up. “Came out the hard way,” the doctor said, stitching me up.

I should have known.