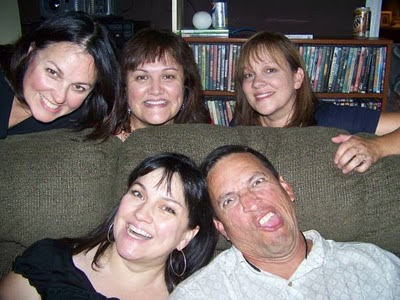 The Ryan Kids: Behind the couch: Shari, Colleen and Patty.  Seated:  Janet and Steve.
My brothers and sisters are an integral part of my life.  They light me up from the inside out and give me hope that relationships between siblings can endure anything and still come out beautiful and loving.

Patty was born in 1961, thirteen months after my parents got married.  I came along thirteen months later in 1962. Steve waited two years before emerging in 1965.  Shari born sixteen months after him and Colleen eleven months after her.  Close in age and resemblance, my siblings and I shared bathrooms, breakfast cereals, a community eating table, school uniforms, and one washer and dryer for all the years we were in the same house.
Last night I talked with my sister Patty for twenty three minutes when I was about to shut off the computer.  She was on her lunch break and wanting to spend about two minutes to tell me something, an answer to my email "I don't do email, Janet...you should know that!"
She began catching me up on her life (rather turbulent this past year) and told me about her job, the kids, her latest bit of challenges in the world.  I listened and talked excitedly.   Some things we shared were deep; others trivial and silly.  We said goodbye quickly when she realized she exceeded the time she had to talk to me.  The last thing we both said was   "I love you."
Patty is the sister I am closest with.  I genuinely admire her and have grown to admire her spirit and courage over the years.  I see her as a mother to her children and am almost jealous of the wisdom she was given (in abundance) in the area of parenting.  She is the most understanding of me and all of my dreams, my loves, my faults....  She gets me.
When I was a teenager things were quite different.  Since I was young, my life was cloudy with all of the strife and  memories and reasonings of an adolescent mind.  The way I thought then, the only person I could ever imagine myself murdering was Patty.
In my adolescent mind, she was the hurdle that I had to jump over to get to happiness.  She lied about me to my parents, ratted out every scheme I concocted with my friends for sneaking out of the house, and personified something I knew I could never be.   Grace; quiet beauty; luminescence.  People used to tell me "Why can't you be more like her?"  Back then I didn't have the answer:  God designed me to be Janet, not Patty.
Thirteen months behind the firstborn of my parents, I came out cute, fussy and craving attention.  I realized early I had to pull some fast ones to keep up with my older sister.  My mom's favorite story is how, as she was trying to show Patty the little potty chair at two years old, I pulled down my business and showed her how to do it.  Praise indeed, when my mom turned to me and exclaimed "Wow!".
It began a rivalry we both fought in different ways, with different weapons.
In elementary school I was what you could describe as a loner.  I was (to coin a phrase used by my peers) weird.  I tried to be lovable to my classmates, but their minds were generally made up.  My sister was two grades ahead of me (based on the design of enrollment months -- she was born in November so she was a young member of her class; I in December, an older member of mine).  When passing me in the halls, she  used to roll her eyes at me as she passed with her group of friends.  They all thought I was weird.  Patty didn't disagree.
In eighth grade something happened.  I got pretty.  I also discovered I wasn't weird.  I knew how to write pretty well and memorized long pieces of text in my mind.  My hair was cut in a page-boy and fell perfectly to my shoulders in a beautiful brown whip.   Patty was in high school and couldn't witness my new popularity in my school.
In high school,  Patty was a junior (11th grade) by the time I entered.  High school to me was like New York City.  I started with a clean slate and quickly realized I could have a ton of friends.  I could hang out with people who were like me (the Speech Team and Drama Club, mainly) and I was MYSELF!!!  The high school world was my proverbial oyster, and I reigned with sincere delight and love for my fellow classmates.
There was only one problem:  Luminescent Patty.  Even my friends and potential boyfriends admired her.
"Your sister is so not like you!" they would would say, "She like is quiet!!"  Still others would say "Your sister looks like Jaclyn Smith!" "Your sister is so pretty!" "Your sister is sooooo......"
What the exclusive world of High school did not understand about the warm world of family is that Patty and I we were actually close sisters, and I would have died for her...if I didn't kill her first.  Despite our growth and forced juxtaposition in our family, nothing seemed to kill the fact that we were prone to arguing, selfishness and proving the other wrong.

Even a shopping trip together highlighted the fact that our styles were worlds apart.  She wore gypsy and free; I wore classic and tapered.    We both read, but incredibly different genres of books.  She sculpted and sketched.  I researched obscure law briefs and poetry.
As she attended  community college, I conquered high school.  At night we shared the same room, but we hardly saw each other for more that a couple of hours a day.  She worked a full-time job and went to college; I was busy with academics, my social life, speech team.  In all of the activity, our underlying tensions would rear their ugly heads... but we managed to live through it, somehow.
I graduated.
My father became a Catholic deacon.
Patty announced she would go on to attend Chico State.

I announced I would attend Stanislaus State, but I couldn't afford to live there, and would commute.

Life marched on.  You would expect that in all the life changes, siblings would begin to grow up....
Two weeks before she left for Chico, we fought hard.  About what I don't even remember.  It was one of our classic fist fights, but we both crossed the line, and the whole thing ended with my mother pulling us apart and shoving me in the hallway.  I remember looking up and seeing Patty, bleeding from her arm, clutching a hank of my hair and panting and crying as my mom shouted "STAY!" like she was a dog.  With that, she closed the door, took me by the arm and dragged me to her bathroom (my mom's private counseling office).
I knew I was in for it, but I didn't care.  My mom gritted her teeth and breathed out how silly and controlling my behavior was, including biting my sister and making her bleed (...did I do that?...) and how SORRY I would be and how much I would miss her when she went off to college.  I stopped her (a no-no in our house) and hissed... "NO, I won't miss her at all".
My mother looked at me, horrified. "Just wait and see," she prophesied, eerily.  "Of all the people in this house the one who'll miss Patty the most is YOU.  She won't even be out the door and you'll be missing her."  She opened her door and exited, having the famous last word.
In two weeks, after packing up my parents car, Patty triumphantly bounded up the steps to our house.  "Bye!" she bellowed to all of us (Patty knew her life would begin the day she left the house).  All the siblings began the hugs and goodbyes, something that was the given as someone was leaving.  The problem was, it was never one of us.  We had never left each other.  I stood in my spot, unable to move, as she hugged Shari, Collen, Steve and I looked on.  She looked up at me and said  "Aren't you even gonna say goodbye to me?"
I put my hand to my mouth and looked out the window.  My mom's evil curse was coming true.  I leaked hot, fat tears out of the corners of my eyes, and everyone was quiet, even me.
I heard her say "Well, alright, bye, Janet" I nodded.  She didn't wait two seconds before bounding out to the car and off to the faraway land of Chico State.
I really missed Patty.  She was beginning a life of adventure and I would be here, in Tracy.  Our lives became harder that year.  I learned that I was growing, but battled growing up.  The weight of the young girl becoming a young woman came on, and I began a life-long battle trying to stay slim.  I made bad choices in friendships, in boyfriends...I was destined to crash and burn, and I did.
Patty, like a Clydesdale Horse, trudged through her college years working as many as five jobs at a time just to finish.  I abandoned the idea and began working full-time, moving out into a new apartment.  I soon moved to Sacramento, and Patty moved in with me.  Her last year of college, she finished courses long distance and did some internships in Sacramento.
We still fought, but less and less.  I now saw my sister as someone who was trying to make it in this world, just like me.  We both asked the same questions:
Is this guy "the one?"
Is there really a God?
Why can't I be skinny and effortlessly thin?
Am I smart enough?
....pretty enough?
...good enough to make it in this world?
Over the next few years we each wrestled with our own demons.
I was in love with someone who wasn't good for me.
She was making minimum wage and paying off college debt.
I became pregnant.
She met a guy she wasn't sure about, but wondered...
And on.  And on. And on....  Through the years, Patty and I argued less, and agreement took back seat to respect, which came quickly with understanding.  Our lives gave way to marriage, children...Jesus.

Until today.  I look back, after the 23-minute precious phone call and thank God for all he has brought us both through.
Each step we have taken has been witnessed by the other, some accompanied with grief -- others, with joy.

Still others, are accompanied by a strange mixture of both.   Lately, the grief, the joy, the everything is shared with the same beauty.    We can, literally, tell each other anything.
I sit here in the inky blackness of a Johannesburg night, stinging with the bite of an autumn night.   She is halfway around the world and it is 2:00 p.m.
Of all of the people who misses Patty, I am the one who misses her the most.
Posted by Brazen Princess at 2:05 PM