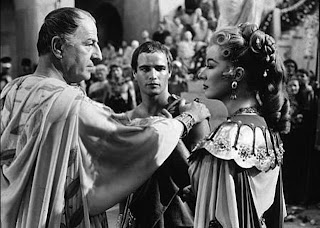 In its day (about the 8th Century B.C), the Roman Empire became the standard of everything: Government, architecture, family, education, agriculture, conquests, and even storytelling.

For instance, according to one legend, Rome was founded in 753 BC by Romulus and Remus(twin brothers), who were raised by a she-wolf when their parents were killed. Some modified the legend confessing the she-wolf was probably a neighboring Shepherd's mother. In the class system of old Rome, one was closely akin to the other.

By the time the Empire was known to the world as the very first Super-power, it had victoriously conquered agricultural communities surrounding the Mediterranean Sea. Their new subjects were taxed, patrolled with Roman armies and taught to speak Latin, as their new national language. The Empire promised protection from marauding neighbors, and a voice in the government.

In reality, Rome was centered around a controlling Senate, who had gangs pummel the citizens into voting for them, securing the power they craved inside of a bickering Senate. Most of the new members of the empire were not given Roman Citizenship and could have anything, including land and civil rights taken from them at any time, for any reason. Because of this, land reform "bills" pelted the Senate.

Just before Jesus was incarnated, three men, Julius Caesar, Pompey, and Crassus, formed a secret pact—the First Triumvirate—to control the Republic. These men would take the army, split it in three parts, go out and conquer for Rome and eachother, new lands, then come back and gloat and feast together. It's amazing to imagine the bonds and jealousies that were formed between them.

After Caesar's victory of a famous rival- Gaul, a fight between Caesar and other members of the Senate led to Roman civil war.

Julius' ally, Pompey, led the opposition against Caesar. In great determination, Julius ventured against a sworn friend and he and his forces won a bloody and painful civil war. Caesar pronounced himself "KING OF THE WOOOOORLD!!"...ahem, I mean "Emporer for Life".

You all remember the famous line from Shakespeare's Julius Caesar, when Caesar is stabbed, he chokes out "et tu, Brute?" ...(You too, Brutus?). It all comes from this next part of Roman History: In short, the Senate thought that Julius Caesar lost his mind. He was drunk with power and must be stopped, or who knows which one of us will be next? Some 60 senators conspired to assasinate the dictator, and Brutus, who was close to Caesar, became one of the leaders of the plot. It would be easy to do, they thought, during a senate meeting, since Caesar had disbanded his bodyguard. If they all acted together, no ONE guilty of murder.

In the wake of his death, Julius' heir, Octavian, took the reigns of leadership and bulked the weary Senate with more Senators. He then formed another alliance, called the Second Triumvirate with Mark Antony and Lepidus.

As it was with his Father's Triumvirate (and most power-sharing arrangements) the three entered into a legendary struggle for dominance.

Lepidus was exiled. Later Octavian defeated his weakening Antony at the Battle of Actium (because he was so distracted by a woman - Cleopatra of Egypt). Octavian, like his father, declared himself to be "KING OF THE WOOOOORRRLD!!!!" ...er, um the undisputed ruler of Rome.

He also named himself Augustus, which means "Bow down to me, underling." Not really...Augustus means "Revered":respect with a little bit of fear.

The decline of Rome so began. From Julius to Nero, 12 men led the Roman Empire. They were fearless in many ways; had the most powerful army, the smartest leaders, the most cultured citizens. Even so, they all fell prey to a classic cliché: Pride comes before a fall. Any super-power can tell you that they were completely unprepared for their fall, even their slow fall.

It was during the Roman reign that Jesus was born, grew up, performed miracles and was crucified. He died and was buried and guarded by Roman soldiers. There is a book of the Bible called Romans, written to the church in Rome that met in the city of the greatest oppressors known to the new church. In the book we are introduced to a brave, new church that is used to opposition. Aquila and Priscilla, a couple who were local business people, are addressed as leaders in this new church...caught up in their new-found love and allegiance to Jesus. Their names continue to appear in the epistles, making them people we want to emulate-- a normal couple with an extraordinary love for Jesus. A couple like Mario and I.

Today was our day off and I IM'ed (instant messaged) with Matt Roome (pronounced like ROME) while I was researching some stuff. He was off to run, but had found us on SKYPE and we "spoke" for the first time in a long time. He chatted about his life, the season, possibly moving back to the USA next year, etc. It was a refreshment to chat, remembering that when I first met him he was a boy inside of his family that had tons of kids. Now he was a man, a young man who had been living in Sao Paolo, Brazil for the last few years. He was speaking fluent Portuguese and bookkeeping....

Todd and Sheri Roome were incredibly good friends of ours in Sacramento. We went to the same church together for years, our kids grew up together. They had decided to move out of the USA to Brazil after we had decided to move to Africa, they just left first! They packed up their house and all of their kids and did it.

I always thought it meant they were gone and would never return. Our friends would be lost to a bunch of nameless, faceless people who were in no position to know who they were. We understood their value, their love, their sacrifice. To hear that they are returning to the States makes us see that their season in Brazil has ended. They've said good bye and left all their friends in the USA. Now they will do the same to their friends in Brazil.

At one point Matt said "I've said hello and goodbye so much it seems normal." I know what you mean, brother.

The Roomes are heroes to us...and their decision is one we support and understand. Their love for God isn't dependent on where they live or what they do. They love people with beautiful, comforting love, and God used them for a season for Brazil. Now Brazil will mourn like we did when they left.

Nothing on earth is permanent.