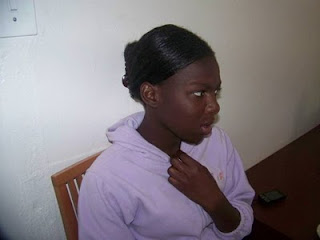 I met with my friend, Suzanne for breakfast today then had an extreme workout (where I found out my weight is now back in the "getting up there...." range) and then called Lesego.
Lesego, a young girl who I'd met just a few months ago, was now a part of our church and the latest person that God had put into my life to help reach her potential.  I met Lesego at a lady's gathering at Portia's where Portia told her she must sit on a stool because the chairs were for the adults.  It turned out that Lesego was a mother...and still a baby.  I guessed she was fifteen.  She corrected me later, and told me she was eighteen.

The relationship accelerated with a phone call one Sunday afternoon where Mario and I were enjoying a quiet moment between services.  This moment was interrupted by call from Dumisani, our friend and co-builder of the church plant in Diepsloot.  He had gone with his wife and a few others to pray for a young girl's baby who was hospitalized for malnutrition.  They had arrived to find that the hospital was allowing the baby to deteriorate because no one was there to feed him (the nurses said it was not their job).  Dumi had said there were bowls of food wrapped and sitting by the crib.  The whole thing seemed so unbelievable to me that I ....didn't believe him.  Still, I promised to go with Monica and Anna (Dumi's wife and friend) to get the baby removed from hospital care and released to the mother the following day.  Dumi said "Thank you, Janet.  You remember her, it is Lesego."

At the hospital, I found what Dumi said was right.  Lesego's baby, Thabo ( TAH- boh ) was severely malnourished, and lacking any nurture from anyone.  The nurses blamed his mother, who was supposed to stay at the hospital and feed him at allotted times.  Lesego blamed the nurses who were supposed to feed the baby if the mother couldn't be there.  The whole thing was a mess... and the bottom line?  Since I was white and standing up for Lesego, the doctor consented to let her be discharged.  Before he did, he took me aside and said, "This girl needs some education on mothering, AIDS, child care.... She seems very ill-equipped for the task at hand, and after all, she is only sixteen."  I shook my head, and corrected him, saying she was eighteen.  Lesego sheepishly looked at me, and I knew I had been deceived.   I brought Monica alongside of me.  I promised the doctor that the church would provide food, mentoring and accountability, come hell or high-water.  He nodded, resigned to release Thabo, but I saw on his face the exhaustion that can only come from hundred of these cases a year.

On the way home we stopped by a grocery store and stocked up on soy formula, canned baby foods, bottles, diapers.  Over cold drinks on the drive back home, I briefed Lesego on her church relationship and included Monica and Anna as "mothers" to her.  We worked out a program that Lesego would have nutrition lessons with Monica, attend home group and church and volunteer twice a week for the church.  In exchange, Lesego would be helped like a family member.  Food, formula and clothing would be given (in reasonable amounts) to help care for Thabo.

The relationship has been flourishing, and like all team efforts, we all keep eachother energized and encouraged.  Apart from a few hiccups and bumps in the road, God has been graceful to us. In a way, Lesego had to believe that her life did not have to be one of hopelessness and poverty.  Born into a severely dysfunctional family, she has been drawing strength from her church family.

Today we were scheduled to go to Home Affairs (the South African Equivalent to the Department of State) to get a birth certificate for her-- something she has never had.  In her dysfunctional family, Lesego's mom, who is defined by every cliche in the book, had never filed for one when she was born.

To finish high school or apply for a grant for Thabo, Lesego needs a South African ID, but can't get one without a birth certificate.  Since she has no written identification at all, we went to her first school for records.  She was recognized by her teachers, and greeted warmly.  It turns out that she was a good student, especially in math.  Because of the time of day and her reputation among the teachers, they gladly obliged and gave her documentation that she really does exist.  We triumphantly high-fived each other and headed off to home affairs.

The process was long, but worth it.  We came away with no birth certificate, as we will still need to bring her mother or an auntie to be interviewed before issuing the important document.  We came away from the day a little closer, a little happier, a little more encouraged.