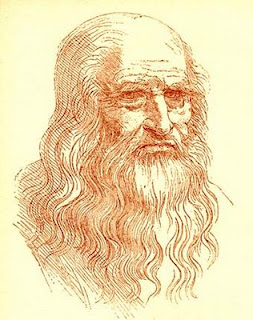 I never saw the DaVinci code.  Never read it, don't have any interest to.  Not only because close friends told me that it was a weak story and not "my cup of tea."  Also not only because (according to the plot summary) it devalues the history and works of my incredible brother and Savior, Jesus.

It is because it misses Leonardo daVinci.   By a flipping long shot.

The Renaissance (French for "rebirth") was what modern historians call the period from the  14th to the 17th century.
Europe, primarily Italy (and starting in Florence) started a wave that would reach the world in the area of awakening.  What revival is to the Spiritual World, the Renaissance was to the intellectual/artistic one.


Art, specifically sculpting and  painting, gradually began to wake up the common people and aristocrats alike.  The beauty and precision and quest for deeper things caused widespread educational reform.  According to Wikipedia, the "intellectual transformation has resulted in the Renaissance being viewed as a bridge between the Middle Ages and the Modern era." (wikipedia.org/wiki/Renaissance)


As anyone can guess, the "wide awake-ness" also caused social awareness and  re-landscaping politically slowly but surely accross Europe.  It also gave birth to amazing thinkers, to of whom were Leonardo da Vinci and Michelangelo.   These two inspired the term "Renaissance man".


Leonardo was an incredibly gifted man, and his quest for how things worked was a lifelong obsession.  As soon as he could start recording, he kept a series of journals that together hold a wide variety of sketches, mathematical equations, formulas, diagrams, verse, dialog and recipes for medicines.


While Michaelangelo painted the Sistine Chapel, Leonardo's paintings were relatively small (an understatement).  The classic Mona Lisa is 30 inches by 21 inches.  Oh, and the reason he painted her?  Money.  Commissioned for the new home of a wealthy Italian family, Leonardo agreed to the painting of the woman just after the birth of her second son.  (That's not a smile, in my opinion, that's a look of urgency.  "I just had a baby, how long do I have to sit here?")  Most of daVinci's famous paintings were done for the reason that he recognized his talent and would sell it to the highest bidder, so he could pursue what he loved best:  learning how things worked.


Little is personally known about him, mainly because things like the National Inquirer or Fleet Street didn't exist back then.  His ambiguous sexual identity (he never married and is now depicted by some as a "gay hero") was most likely for an obsessive-compulsive personality and almost non-existent sleep schedule.  Today there are several movements that push "The da Vinci Sleep Schedule", or  polyphasic sleep, which is a type of sleep pattern involving  no more than 5 hours of Z's a day. Some purists argue that to truly do this, you must discipline yourself to sleeping an average of two hours a day, which is (they believe) how much Leonardo Da Vinci himself slept.


The way to know someone is to read their journals. In his, now kept in various museums around the world, we see that Leonardo was busy with many things.  Observing science and recording it with the most incredibly accurate and beautiful drawings was his passion, especially the human body. In obsessed sketchings and re-sketchings, Leonardo depicts muscular movement, flexibility, positioning of a fetus before birth, an arm outstretched, and arm flexed, a hand reaching, a hand in a fist.... All learned from a teacher, Andrea del Verrocchio, who insisted all his pupils learned anatomy.  It is said that this affected Leonardo for years, and he could not escape his passion to draw the inner and outer body.  Later, as a successful artist, he was allowed by a hospital to join another doctor in dissecting human cadavers and drawing the sinews and muscle underneath the skin.


In his journals, Leonardo closely observed and recorded the effects of age and of human emotion on the physiology, studying in particular the effects of rage. He also drew many figures who had significant facial deformities or signs of illness.  So good at drawing, he reached further: to understand.


The only journal in private hands is in the posession of Bill Gates, a multi-millionaire who is a precise thinker,  if not a .  I wish I could have half an hour to see it.  It is called Codex Leicester, and contains all kinds of drawings and theories on scientific process.


Years later he is the benchmark of a man with a mind.


Posted by Brazen Princess at 3:19 PM

Email ThisBlogThis!Share to TwitterShare to FacebookShare to Pinterest
Labels: Leonardo