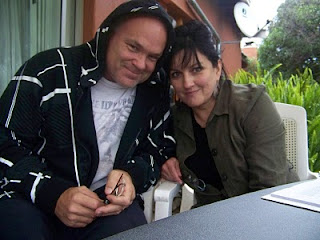 I changed my blog again. My goal is to get the most readable inoffensive background so that the story can speak above the din of color and pattern.

So what do you think?

Doing something like this reminds me how much I don't like change. Change makes me feel impermanent...a state that I should be used to by now.

I grew up in a house that was predictable and boring. And safe and comforting. My dad arrived home every day from work at 4:45. There was dinner soon afterwards, where all five kids and my mom and dad would sit at the table. The meal would be a meat, a starch and a vegetable. Milk to drink; rarely e a fancy dessert, but many times a sweet end to the meal.

It was before sports and extra curricular activities threatened families...and our house was untouched by the hustle and bustle of outside. My dad had a wide variety of music he listened to: Big bands, folk, Broadway musicals, classical, Johnny Cash, or easy listening. On a good night he would include someone we knew, like Simon and Garfunkel or Barbara Streisand.

Our kids grew up in a house that was similar until they hit the seven year old mark and they all played sports in city leagues...all of which disrupted meal times. Later (when we got lazy) we began to eat with the TV on. As I look back, our family dinners became filled with tension, and the joy had gone out of having meals together. It became easy to split everyone up and all of us eat at different times.

Looking back, the house was a mixture of silence and music. We were either a happy family or we were a family that was sinking in busy-ness or chaos. The last five years of us all living togehter was busy busy busy....

Change came when the boys stoppped coming out. When Vince moved out. When we moved to Africa. When Alicia left. Change is the only predictable thing in my life.

I look today at myself in the mirror. I am rarely without glasses... rarely at the weight I want to be. I have changed.

I look at Mario (my hunk...I still can't believe he married me)and see the same. He always knows where his glasses are because he hooks them onto the front of his shirt.

How do you like the new layout?
Posted by Brazen Princess at 3:23 PM