“Parker looked, turned white and moved away. The eyes in the reflected face continued to look at him — still, straight, all-demanding, enclosed in silence.”
~ from “Parker’s Back” by Flannery O’Connor

Flannery O’Connor was born on a Wednesday, March 25, 1925 in Savannah, Georgia, the only child of Edward and Regina O’Connor. The family, inside of an extended family, were devout Catholics in the heart of the Bible Belt, ripe with Protestantism. Growing up in the deep South and being part of a spiritual minority wasn't easy for O'Connor, and writing was one of the ways she coped with her surroundings. Her pensive, careful personality allowed her to digest the brutal landscape of the South, and in turn, write what she saw.
After graduating from high school in 1942, O’Connor enrolled in Georgia State College for Women and then to the prestigious Iowa Writer’s Workshop, and then to Yaddo, a writing community. Every piece of her education nurtured the fire she had inside. O’Connor's teachers and mentors marveled at her work, and encouraged her development of the Southern Gothic style. She used regional settings and “grotesque” characters, (referred to as freaks or misfits) to portray the humanity and need for salvation.
O’Connor died of lupus when she was just thirty-nine years old. During her brief career, O’Connor wrote two novels, thirty-two short stories, an incredible collection of letters, and many literary reviews and commentaries. Her collection of Short stories, Complete Stories, won the 1972 U.S. National Book Award for Fiction.  In one 2009 poll, Complete Stories was named the best book ever to have won a National Book Award. O'Connor's writing has influenced a myriad of writers, artists, and even filmmakers.

When We Met:  I was eighteen when I read “Parker’s Back”, the haunting story of O.E. Parker, a man who wants nothing to do with religion. His body is covered in ink, tattoos that he wears proudly, the ultimate anti-establishment chip on his shoulder. He meets a devout but austere woman, who he later marries, and slowly becomes unable to fight the terrible truth that God is real.  The title “Parker’s Back” refers to O.E.’s back that he will not tattoo, simply because he can't see it.  Once he finds a Byzantine picture of Jesus, with all-consuming eyes, he chooses to break the oath he's made to himself. The complexity and desperation of the story is amazing – a web spun with pure gold.

Why She’s Good:  O’Connor is seen as a writer who was “kissed by God” – in other words, she was meant to write.  Each story involves an unapologetic wrestling with God, the central reason she started writing in the first place.  Flannery’s stories have deep, spiritual themes, but many are filled with racist language, horrid villains, classicism, sexism, and violence. She wanted to move her readers to a place of discomfort, to consider their own need for God. Using grotesques, she shocked and moved her readers to a place of decision. In addition to her round, Southern characters, O’Connor writes God into her stories. He is always there, somewhere. Her aim, she once explained, was “to penetrate the natural to reveal the supernatural” by writing about “unthinkable acts of grace.” And yet, her prose writing is so accomplished that Flannery O’Connor cannot be described as a “a Christian Writer,” any more than Shakespeare can be labeled “an English poet.”

Plot Variations:  A man intends to take his family from Georgia to Florida for a summer vacation, but a car accident places an escaped convict in their path.  A racist woman who runs a farm seeks to run a scrub bull from her property singlehandedly, like she does everything else. A PhD and amputee opens her heart to a traveling Bible salesman, only to see his true colors exposed. A young girl contemplates her silly cousins in the same day she measures the possibility of becoming a martyr. 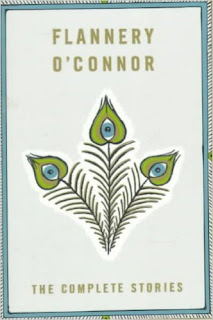 Favorite Quote:  O’Connor viewed Christianity differently than how she viewed the church: “The only thing that makes the church endurable is that somehow it is the body of Christ, and on this we are fed. The operation of the church is entirely set up for the sake of the sinner, which creates much misunderstanding among the smug.”

Trivia: Flannery O’Connor is cited by many authors as a writer who influenced their work, but many others have been affected by her as well.  Once in an interview, Bruce Springsteen was asked to name his biggest influence.  He replied: “One would be difficult, but the short stories of Flannery O’Connor landed hard on me. You could feel within them the unknowability of God, the intangible mysteries of life that confounded her characters, and which I find by my side every day. They contained the dark Gothicness of my childhood and yet made me feel fortunate to sit at the center of this swirling black puzzle, stars reeling overhead, the earth barely beneath us.”

The bleeding, stinking, mad shadow of Jesus: True to Southern Gothic Form, O’Connor wrote The Violent Bear it Away, a story about Francis Tarwater, a fourteen-year-old character who does not want to fulfill a destiny that God is calling him to: being a prophet.  A modern-day version of Jonah, many people say that they see Flannery in him. As he walks the road to his destiny, Flannery shows the reader: "His black eyes, glassy and still, reflected depth on depth his own stricken image of himself, trudging into the distance in the bleeding stinking mad shadow of Jesus." 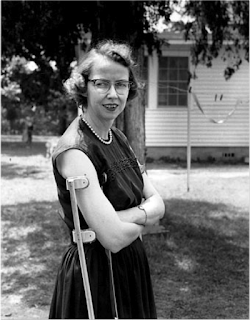 Posted by Brazen Princess at 12:26 AM