“That afternoon, as was her habit, Boori Ma reknotted her hair, untied the loose end of her sari, and counted out her life savings.”
~from “A Real Durwan” by Jhumpa Lahiri 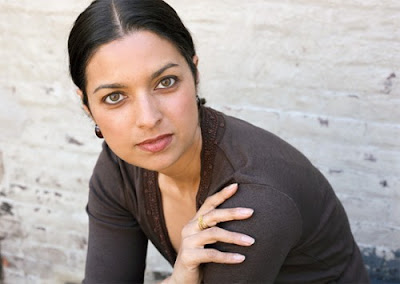 Jhumpa Lahiri was born Nilanjana Sudeshna Lahiri on Tuesday, July 11, 1967 in London.  She is the daughter of Amar and Tapati Lahiri, a Bengali couple who immigrated to the United Kingdom from Calcutta, India.  Jhumpa’s name was shortened for ease – a family nickname that westerners preferred over her Bengali name.  She started writing as a child, but did not take it seriously until her early twenties. After graduating from Barnard College in 1989, she began experiencing what she called “a slow, hesitant artistic awakening… a secret, scary thing." She then joined the student body of Boston University, where she took her first serious creative writing courses, eventually earning three literary master's degrees before receiving her doctorate in Renaissance studies. For her publishing debut, she gave us Interpreter of Maladies in 1999, which won the Pulitzer Prize and a Hemingway Foundation/PEN Award. She followed up in 2003 with her first novel, The Namesake, which was made into a movie. She later published Unaccustomed Earth, The Lowland, and most recently her Italian memoir, In Altre Parol – or  In Other Words.

When We Met:  I had just returned to America after living on the African continent for seven years.  Our things (including all of my books) were in transit and my super-cool housemate lent me her copy of “Interpreter of Maladies.”  The title intrigued me and I sank into a good chair and began.  The collection of stories is about Indian-Americans (most from the Bengali tradition) wrestling with “border identities” –all authors I admire present these paradoxes in their characters.  Lahiri's  words were delicate and casual, and I became entranced as if someone placed me in a room where the air was infused with opium,.  Her stories sang to me, and I was meeting characters with whom I could identify.  They ask the same questions we do: Who am I and where am I going?  I am in awe of the way she tells a story.

Why She’s Good:  She has an unusual, scary command of language.  No one has wowed me with story endings the way that Jhumpa has.  She saves an important detail for last few paragraphs and the reader is stunned, surprised, and even a little freaked-out.  She is casual and easy to read, but you realize that you are in a five-star restaurant after the first bite. 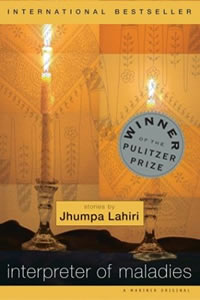 Plot Variations:  A married couple live as polite friends in their upscale residence until an electrical outage brings them together, sharing the first real conversation they have had in years.  An Indian-American family hires a tour guide to take them to ancient ruins, where they learn about his other intriguing occupation.  Two college roommates share chemistry and keep secrets about intimate relationships.

Buy One:   I prefer Lahiri's short stories over her novels.  I recommend Interpreter of Maladies, but only by a nose in front of Unaccustomed Earth.  These stories are vibrant with color, tension, yearning and the search for significance.  Available here.

Favorite Quote:  “I've inherited a sense of that loss from my parents because it was so palpable all the time while I was growing up, the sense of what my parents had sacrificed in moving to the United States, and yet at the same time, building a life here and all that that entailed.” 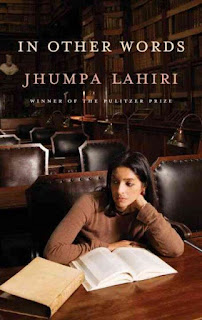 Trivia: Lahiri’s recent triumph of writing her memoir in Italian is not an accident.  Her parents came from India, so she spoke Bengali until she was four years old. She learned to read and write English, but she says neither of these linguistic identities ever felt fully her own. "I had studied Italian for many years — simply for the love of it," she told NPR.  Italian offered the linguist a different path, with respect to her identity in writing.  "I'm bound to fail when I write in Italian, but, unlike my sense of failure in the past, this doesn't torment or grieve me."  Thank you to NPR - read more here.

Finding Her Voice: Authors take years to  "find their voice" - the distinctive tone and style that is woven into their words, permeating their writing as your mother's fragrance permeates her house.  Lahiri once addressed the development of her own literary voice,in her understated, beautiful way: “I just want it to be true, and I want it to be strong, and I want it to be pure. But these are lofty ideals, and language is a very messy thing; it's a very complicated thing. And that's why I say that that voice is an illusion, it's an ideal that I'm moving toward. You know, the closer you get, the farther away it gets. But I think, isn't that the point of creativity, to keep searching?”

Posted by Brazen Princess at 5:48 PM

Email ThisBlogThis!Share to TwitterShare to FacebookShare to Pinterest
Labels: Jhumpa Lahiri, love reading, Love writing!!, must read authors, must read books, one of my greatest influences