“He said that he would love me like a revolution, like a religion.  Abuelita burned the pushcart and sent me here, miles from home, in this town of dust, with one wrinkled witch woman who rubs my belly with jade, and sixteen nosy cousins.”
~from “One Holy Night” by Sandra Cisneros 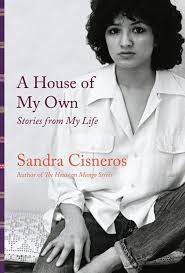 Sandra Cisneros was born on a Monday – December 20, 1954 in Chicago.  Her father, Alfredo Cisneros de Moral was born in Mexico and met his wife, Elvira Cordero Anguiano in America, where they married . Sandra was the third of seven children, the only daughter in the family. She moved frequently during her childhood and visited Mexico often.  Cisneros found a creative outlet in writing, later earning a BA in English from Loyola University of Chicago and an MFA from the prestigious Iowa Writers Workshop in the late 1970's.  Her unique voice, a working-class, Mexican-American woman with artistic sexuality, was different from everyone else’s at Iowa and writer's workshops were often painful.

The experience of celebrating how she was different, not only from other students at Iowa but with any author in print, eventually led to her book, The House on Mango Street, which was published in 1984.  It won the Columbus Foundation's American Book Award in in 1985, and instantly became an American favorite.  Also an accomplished poet, Cisneros published two full-length books of poetry: My Wicked Wicked Ways and Loose Woman.   Woman Hollering Creek and Other Stories (my personal favorite) was released in 1991 and Caramelo in 2002.  Her latest work, A House of my Own:Stories From My Life, is a memoir of collected, interlocking essays of  personal stories about family, travels, moving, and the challenges (and delights) of a single woman journeying solo. "So often you have to run away from home and visit other homes first before you can clearly see your own," she told the Los Angeles Times in October of 2015. 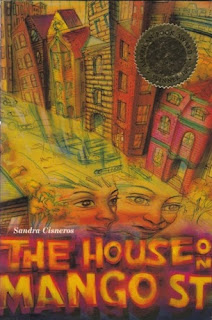 When We Met:  Believe it or not, I just started reading Sandra last winter.  I was at the Sacramento Poetry Center, doing a public reading of one of my short stories, “The Puzzle” when a girl came up to me afterward and remarked how much my story reminded her of The House on Mango Street.  I was nonplussed, and told her I’d never heard of the book. She nearly fell over.  She told me that I had to RUN to buy it and read it.  After that meeting, I vowed to start reading Cisneros and did.  I was moved, on more than one occasion, to tears as I read her well-constructed stories of lives leaning against one another, struggling to find a true identity that s somewhere between Mexico and America.  She has a deep and true voice of a Latina – and she makes me think she is related to me as she tells tells a story.  "You know the one," she says.   "I'm not like the Allport Street girls who stand in doorways and go with men into alleys..." she tells me, and I agree, nodding my head.  "I know, mi amiga, we are not like those girls.  But we have made some bad decisions about love, verdad?"

Why She’s Good:  Being Latina-American, I can say that there is a piece of myself that lies just below the surface of who I am – and never comes out.  It is too polite.  It has been taught to be subservient.  Sandra gives that piece of myself permission to surface and dance with her as I read.  For a Latina reader, Sandra Cisneros es no apenas escritor, pero ella es mi hermana!  In other words, she expresses my heart in its fullness and makes me feel like I am right there with her.  The moment I started reading Sandra Cisneros I wanted to go hug my Mom.  I wanted to reunite with my Grandma.  I wanted to celebrate being Latina, Latina, Latina - with no apologies!

Plot Variations:  A sister and her loud, noisy brothers take a yearly journey with their parents from Chicago to the "Little Grandfather’s and Awful Grandmother's" house in Mexico City for the summer.  A girl who wants to find significance falls in love with a man who turns out to be a serial killer.  Emiliano Zapata’s girlfriend tells a story of loneliness, understanding, and being constantly abandoned by her lover, who is off “revolutionizing the country.”  A girl living in a poor Chicago suburb seeks out a meaningful life and freedom as she learns to appreciate her neighbors. 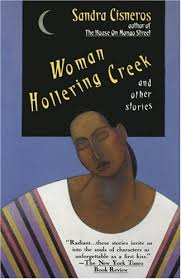 Buy One:  While others will try to persuade you to buy The House on Mango Street, I believe that there is greater depth in Woman Hollering Creek, the book that made me howl at the moon and declare Cisneros a sister.  I’m going to recommend Audible for the first time here.  Woman Hollering Creek is actually paired with Loose Woman, a book of amazing poetry, both read by Sandra herself.  You will get to hear the familiar stories in her own voice, and for the way she writes, it is best this way.   If you haven’t used audible yet, now is the time!  It’s awesome! Available here.

Favorite Quote:  "Perhaps all memory is a chance at storytelling and every story brings us closer to revealing ourselves to ourselves."

Pain in Motion: Great writers find their voice in deep-seated insecurity or rejection.  Cisneros remembers many childhood moves, which involved changing residences, not only in the USA, but also back to Mexico to be near her paternal grandmother.  She admits that her family’s impermanence affected the way she viewed her life.  “We moved like the tides," Cisneros told Publishers Weekly in 1991.  “From Mexico back to another barrio of Chicago that looked like France after World War II—empty lots and burned-out buildings."  The moving continued for many years. Cisneros noted that her grandmother's Mexican home was the only constant in a series of traumatic upheavals. 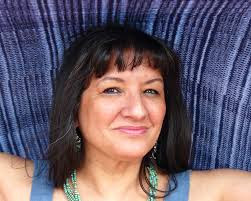 Posted by Brazen Princess at 10:30 PM