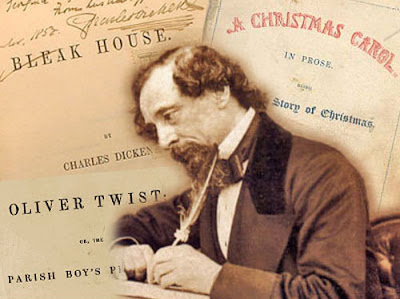 Charles Dickens was born on  February 7, 1812 in Portsmouth, England.  Because of poverty, he was forced to leave school and work in a blacking factory when his father entered debtors prison, just to feed himself.  No kidding, you can’t make this stuff up.  He read constantly, escaping into books for solace and comfort, and because he craved an education.  Despite a lack of formal training, he later found work in publications in London, where he worked as an editor of a weekly journal.  He bagan to publish stories in the journal (Bleak House was published in installments and later published as a book – one that is long and difficult to piece together).  Arnold Hausser wrote that “…masses of the illiterate poor chipped in ha'pennies to have each new monthly episode read to them, opening up and inspiring a new class of readers.”

He was revered by the English as a literary genius, enjoying what authors can only dream about: popularity during his lifetime.  Over the course of his fifty-eight years, Dickens wrote 15 novels, five novellas, hundreds of short stories and non-fiction articles.  He also was an important voice, advocating reform for children’s laws, especially those of child labor.

When We Met:  Like most English speaking children, I met Charles Dickens at Christmas.  A Christmas Carol, his most famous literary work, is a novella that tells of Ebenezer Scrooge, the dry, twisted miser who works his only clerk, Bob Cratchit to death.  Scrooge is given three ghosts in order to bring repentance (yes, the story advocates repentance and redemption) that will appear to show him why he is the way he is.  He sees that Cratchit is one noble man, typical of the working poor in London, supporting his family and rejoicing in the little blessings that life has to offer.  A Christmas Carol is woven into my heart, like fabric that makes me Janet.  It preaches the real joy of the season and true blessing of living for Christ and mankind.  After reading A Christmas Carol, I devoured Tale of Two Cities, Great Expectations, Oliver Twist, David Copperfield, Bleak House, and The Life and Adventures of Nicholas Nickleby.

Why He’s Good: Because he’s Dickens.  He knows how to terrify you to your core – “He scared the Dickens out of me” is an idiom for a reason.  He creates characters that are so multifaceted that you could swear that they are real – and that you’re related to them.  I can sketch the faces of Wilkins Micawber and Mr. Dick, not just from words that Dickens has written, but because they live in my heart forever. For writers, few masters can compare to William Shakespeare and Charles Dickens.  They epitomize the beautiful skill of presenting a story with the most masterful language imaginable.

Plot Variations:  A young man, left fatherless, makes his way to the big city to find his Uncle in order to find support for himself, his mother and sister.  An orphan is sold on the streets because of insolence at his oppressive orphanage.  A boy is raised in a school for the unwanted, making friends that will last a lifetime.  A young writer, working as a Parliamentary reporter and a roving journalist takes over a failing newpaper and finds success in his collection of color sketches of London life. Favorite Quote:  There are so many, but I cannot help quoting one from Bleak House that brought me to tears when I read it.  He describes a very young girl that was forced to work (as are so many characters in Dickens’ books) just to feed her family.   “I don’t know where she was going, but we saw her run, such a little, little creature, in her womanly bonnet and apron, through a covered way at the bottom of the court; and melt into the city’s strife and sound, like a dewdrop in an ocean.”

Trivia:  Dickens had ten children, and was said to have lavished them with attention and love.  Just like Pip in Great Expectations, and many of the characters he created, he gave each of his own children their own special nickname, like  "Skittles" and "Plorn."

Why I am an English Major:  Dickens elevated language for the working poor.  He brought beauty, through words, into the world.  He gave us characters that we would give our hearts to, loved us without knowing us, and comforted us in our grief by letting us know that we are not alone.  I love him and relate to him. I leave you with a quote that is attributed to Dickens near the end of his life:

Posted by Brazen Princess at 2:08 PM