“IT is a truth universally acknowledged, that a single man in possession of a good fortune must be in want of a wife.”
― The opening of Pride and Prejudice by Jane Austen 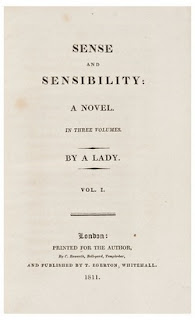 Jane Austen was born on 16 December 1775 in Stevenson Rectory, a small village in Hampshire, England.  Jane's parents, George and Cassandra, were well-respected in their community. Her father, educated at Oxford University, served as village rector of their Anglican parish. The family was close and the children grew up in a creative environment. When Jane was young, she and her siblings were encouraged to read –from their father and mother’s extensive library. All eight Austen children wrote poems, plays and novellas.  Jane soon distinguished herself among her siblings with a creative voice and wrote novels.  Two of which –Sense and Sensibility and Pride and Prejudice—were published anonymously.

Since Jane was a lady in the registered gentry, she could not earn a living from the sale of her writings nor sign her name as the author.  It wasn’t until Jane died, at forty-one years old, that her siblings, Cassandra and Henry, pushed for the publication of Persuasion and Northanger Abbey, and for authorship to be attributed to all of her works. 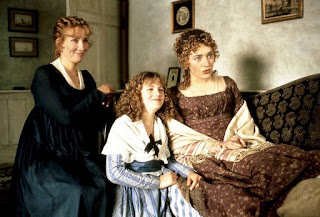 When We Met:  I was 29, and we had just moved to Sacramento, when I saw the film adaptation of Sense and Sensibility.  I fell in love with the story and decided to read the book.  It took a minute to get used to the language, but Austen’s story was powerful and easy to love.  After Sense and Sensibility, I read Pride and Prejudice, a perfect novel that leveled me halfway through when Darcy proclaims his love for Lizzy. No film has ever been able to deliver the surprise of that paragraph – or the written perfection of Lizzy’s reaction. After that Came Emma, then Mansfield Park, my favorite.  After that I read Persuasion, another perfect beauty.

Why She’s Good: She’s funny.  She tells stories of families, not just individuals.   Austen delivers stories about the search for true love and understanding in a world that is not perfect.  Her characters have faults, weaknesses, and strengths, just like we all do, and they remind you of people you know.  The reader can’t tell the heroes from the villains until disaster strikes—and disaster always strikes.  Austen is able to deliver socially complicated stories with happy endings, one right after another.  Time after time, she stepped up to the plate, hit a home run and then (because she was an English Lady) was not allowed to run the bases.  I think Jane serves as an example of writing something for its own beautiful reward, that may or may not be recognized in a writer’s lifetime.

Plot Variations:  Two sisters, one rational and the other romantic and emotional, find themselves fatherless and unable to enter respectable English society without a stigma attached to them.   An intelligent daughter of a country gentlemen realizes that she will soon be expected to marry, even though her dowry would never attract anyone of sound character.  A brilliant young lady is sent to live with an unkind aunt, who serves at a beautiful estate that is paid for and run by slave labor.  A young matchmaker with no financial concerns discovers that she is not the lady of noble character she thinks she is. 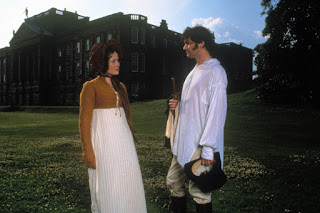 Buy One:  Pride and Prejudice is Austen’s most revered novel, and the one I have read the most.  BUT I usually recommend Sense and Sensibility, the easiest read and the one that brings the reader right into the life of the British gentry at the end of the 18th century.  In both novels there is a strong sister relationship between the two main characters and you love them both—even though they are polar opposites.  If you have a kindle, Amazon offers a free Pride and Prejudice for download here and Sense and Sensibility for a whopping ninety-nine cents here.  You’re welcome.

Favorite Quote:  Jane Austen was as witty as Elizabeth Bennet (from Pride and Prejudice) and wrote as much as Fanny Price (Mansfield Park).  I love how she would candidly express her mind, especially when ladies were ostracized for saying such things.  About the gentry not reading modern novels, she said: “The person, be it gentleman or lady, who has not pleasure in a good novel, must be intolerably stupid.”

Trivia:  Many modern stories borrow from Austen.  Clueless is a modern version of Emma.  Bridget Jones’ Diary is a version of Pride and Prejudice, complete with the scandalous love triangle.  Bollywood did their own version and called it “Bride and Prejudice” – because that’s allowed, apparently.  From Prada to Nada is a modern Sense and Sensibility.   And everywhere, everywhere there are vampire and zombie renditions of Austen’s novels.

The Secret Betrayal:  Austen was dissatisfied with the way that society treated women.  English ladies could not earn their income and their financial support was given to them in an allowance from their husbands.  If a woman stayed unmarried, usually because she was not pretty, she was most likely to become poor.  Austen was seen as someone who disrespected the ways of the gentry by writing about the dependence of women on marriage, especially to gain acceptable social standing.  Would it be possible that many women traded their quest for love in favor of economic security? Oh, you bet!

As Austen writes in Mansfield Park, “There are certainly not so many men of large fortune in the world, as there are pretty women to deserve them.”
Posted by Brazen Princess at 11:10 PM