“You told us with your own mouth that there was only one god. Now you talk about his son. He must have a wife, then.”
― Chinua Achebe, Things Fall Apart 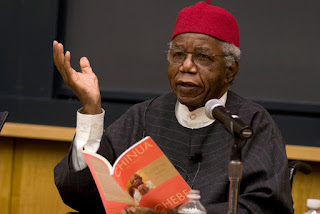 Chinua Achebe was born Albert Chinualumogu Achebe in Nigeria on November 16, 1930.  His parents, Isaiah Okafo and Janet Anaenechi, lived as traditional Igbo (EE-bow) until they converted to the Protestant Church Mission Society, or CMS.  After their conversion, neither parent abandoned the beliefs or practices that were found in the Igbo traditions.  This familial environment proved to be a permanent crossroads that affected Chinua dramatically. After secondary school, he won a scholarship and studied world religions and traditional African cultures.  His short stories and poetry tell of the changing African political climate of his day, and the overriding importance of family and tradition.

When We Met:  I started reading Things Fall Apart, Achebe’s magnum opus, when we moved back home in 2013, after living in Africa for seven years.  I fell in love with the round, natural words of Achebe, dripping with respect and formality.  His genuine love of traditional expression was not wasted on me.  I was homesick for the continent and was able to hear the conversation of my friends, as well as remember the challenge of being a missionary to tribal people. 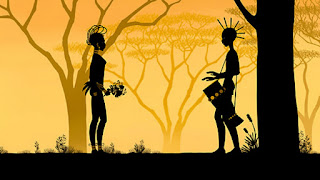 Why He’s Good: Think of your favorite Uncle who tells stories – then make him African.  Achebe is the quintessential African story-teller, filled with love and connection, carrying on the amazing oral tradition of his people. Achebe isn't a great African writer because he describes the colors of the African sunsets, or the roaming bok, but becasue he pulls the reader into the world of traditional African people – in most cases, the Igbo--and fills our hearts with their plight.  He writes of the long-standing feud between colonialism and traditional societies.  Themes of polygamy, masculinity, and respect come to life as Achebe deftly weaves their importance into the story.  Beneath the surface is the universal struggle to find God, significance, love, and security.  Achebe’s Post-colonial themes offer a unique perspective on modern literature, infused with politics that cannot be ignored.

Plot Variations:  A tribal leader, trying to live a life of honor and strength, falls from grace with the tribal world and later confronts aggressive Christian missionaries. A marketplace official tries to understand the smallpox epidemic that he suspects is the result of angry gods.  A hair dresser living in New Haven, Connecticut writes a popular blog in which she explores what she calls Racial Disorder Syndrome.

Favorite Quote:  Because I worked as a Christian missionary in Africa I loved how Achebe recognized God’s power and his ability to uplift people, especially women.  Even so, he recognized the shortcomings of organized, institutional religions, especially when the leaders “forgot” how to live in the love of Christ: “I thought that Christianity was very a good and a very valuable thing for us. But after a while, I began to feel that the story that I was told about this religion wasn't perhaps completely whole, that something was left out.” 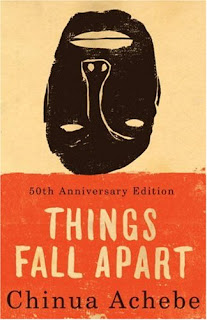 Buy One:  Things Fall Apart is a bucket list book (one that you should read before you die).  If you love to read, or if you are looking for one book that explains post-colonial culture in Africa, make it this one.  The story unfolds perfectly, is told with a perfect African perspective, and concludes – perfectly.

Trivia:  Achebe's unabbreviated name, Chinualumogu, means "May God fight on my behalf", a parents’ prayer for divine protection and spiritual stability.  Chinua’s five siblings also had English and traditional names – in the spirit of embracing both cultures.

Revelation: I leave you with a powerful quote from one of Achebe’s stories that explains how the poverty-stricken African people were overtaken by globalization:
“But progress had turned [the marketplace] into a busy, sprawling, crowded and dirty river port, a no-man-land where strangers outnumbered the sons of the soil, who could do nothing about it except shake their heads at the gross perversion of their prayer.”
~From "The Sacrificial Egg" by Chinua Achebe

Posted by Brazen Princess at 4:22 PM