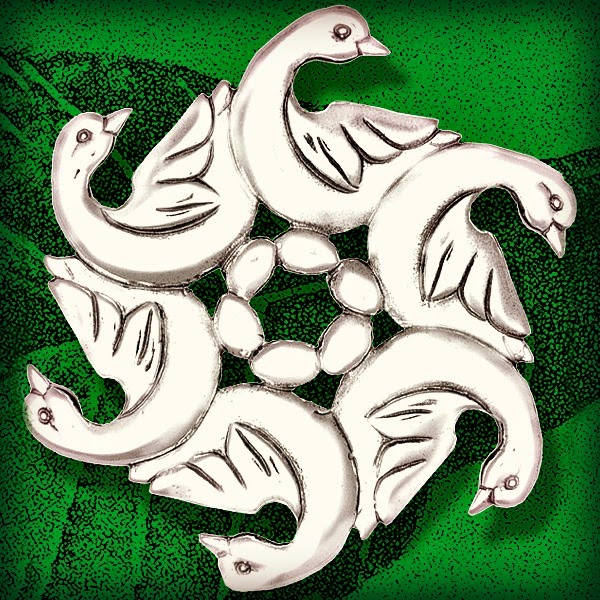 The Sixth Day of Christmas is technically six days after Christmas.  The way the church celebrated the holiday ( moving the celebration of birth of Christ to December and then saying the Magi appeared twelve days after his birth ) – Epiphany was the “Twelfth Night” of Christmas.

Man began His time keeping on a model set by God – Seven Days in one week.  The calendar is measured in twelve months, roughly 52 of these weeks.  Christians (and Jews) used to champion a Sabbath: six days of the week were set aside for work and one was set aside to rest.  This rest day was also modeled for us by our creator – GOD rested on the seventh day.

On the SIXTH DAY of Christmas, my TRUE LOVE gave to me SIX GEESE A-LAYING.

The Sabbath was a good idea, but one that was lost in times of slavery, famine, war and plagues.  In truth, man (the creation of God) cannot keep the law to save his life.  We’re a damn mess.  The Holy Sabbath was a foreshadowing of a greater rest – a better rest.  It was there to whisper that something better was coming: a complete rest in the finished work of Jesus Christ.  The perfect Son of God sanctifies us and makes us holy since we can’t do it ourselves. God sanctified Jesus Christ, but in a greater way: He sent a Messiah into the world to be our sacrifice for sin (John 10:36). In Him we find complete rest.

Today, are you weary?  Are you ready to lay down all of your striving to be perfect?  We really can’t be perfect, you know…Jesus alone is our only hope for rest.  If you want to remember this, think of those six days of creation and remember  that you can now rest for good.  Put down all of your desires to be good enough for God and rest in Him, not just one day a week, but always.

On the SIXTH DAY of Christmas, my TRUE LOVE gave to me an example of striving  - and a promise of TRUE REST.  Six Geese laying all kinds of eggs!  Not only does that sound like a lot of work, it reminds me of the life I left behind!!

Thank you, Jesus!!
Posted by Brazen Princess at 1:08 PM