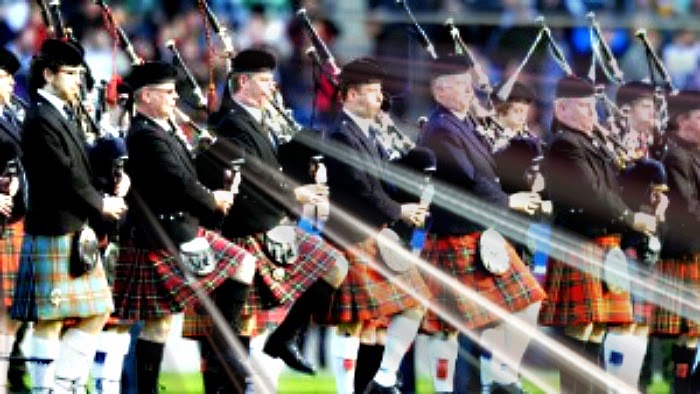 On the eleventh day of Christmas my TRUE LOVE gave to me ELEVEN PIPERS PIPING!

The gifts that my TRUE LOVE sent to me in the final four days are often reordered in the earlier versions of the song (Maybe carolers had too much egg nogg?) For example, the pipers used to be on the ninth day rather than the eleventh and in some versions, there are bells ringing, bulls a-beating, and asses racing on the last four days!  Since I grew up (as most Americans did) singing it in this order, let’s proceed as if there are no discrepancies, shall we?

On the eleventh day of Christmas I always imagined ELEVEN PIPERS as men with shiny flutes – running around with tights and brightly colored shoes, trying not to run into the TEN LORDS A-LEAPING.  Instead, in France (as in all of Europe) the “pipes” were bagpipes – played by strong men who walked purposefully together in formation – drowning out any other sound around them.  In the 1700’s pipers were men of good will, respected and never silenced.

Jesus chose 12 men to have as his closest followers.  We call them  “the Apostles” (the Greek translation “apostolos” means “one who is sent out”).  He sent them out in pairs to heal the sick, raise the dead and tell the good news to the Jews that there is such a thing as a Messiah and God had not forgotten them.  When he was most popular, the Apostles saw Jesus enter Jerusalem on a colt with people shouting and worshiping and waving palm branches.  A week later, Jesus exited Jerusalem carrying a cross on his back, whipped within an inch of His life – on His way to be executed.  One of his own 12 Apostles (Judas Iscariot) turned Him over to the ones who wanted to kill him – the Sanhedrin.

After the betrayal and consequent crucifixion of Jesus, the Apostles lay low, hoping to stay out of trouble (this is even after the resurrection –and ascension of Jesus Christ).  One day, the Holy Spirit came in the Upper room where they were staying and entered like a freight train – tongues of fire resting on the heads of the eleven remaining apostles.

After this day (Pentecost) the Apostles went out boldly, preaching and evangelizing and telling the good news of Jesus Christ in power.  It is said that the early church held true to the Apostles teaching (Acts 2:42) and God added daily to those who were being saved (Acts 2:47).

The Apostles knew Jesus before the Holy Spirit came; they weren't wimps, they were real men.  After The Holy Spirit filled them, they became loud and fearless.  Like soldiers with new life breathed into them, they marched in formation and spread the good news of Salvation through faith in Jesus Christ.  The threat of being executed like their teacher was still there; they no longer feared it.  All besides John were martyred (even Peter, who had previously denied Christ, was crucified upside down).

The ELEVEN FAITHFUL APOSTLES with their brazen message were like ELEVEN PIPERS PIPING.

It is in the tradition of the Apostles that we trumpet the Gospel of Jesus Christ, especially at Christmas.  PLAY on, church!  Remember our message is real and powerful and when we march in formation, no one can shut us up!

Posted by Brazen Princess at 12:18 PM