When we first came to South Africa (3 1/2 years ago) we witnessed our first Christian Wedding among traditional Africans.  The couple was adorable; already had two kids; and lived in the same house.  They had the blessings of the families and he had paid a large sum of money for her hand in marriage: labola.

Compared to the system I had only heard of in America (dowry) where the women's family "pays" the man, the labola system here seemed odd. Both customs were originally designed to bring the two families together, but always reeked of "sale" to me and left a strong distaste in my American mouth.  I have since learned to keep silent on this matter. 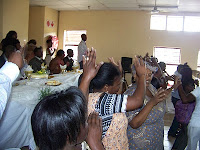 Anyway...back to the first wedding.  When I saw the dancers come in, dancing a complicated step to a traditional African beat...all looking like bridesmaids but dancing like Zulu princesses, I was so happy!  The families were jumping up and whooping at the entrance and making the greatest excitement that I began to jump, too.  Easy to celebrate at a wedding...I just never had this much loud company before!!


Yesterday was such a wedding.


The ceremony itself took place at The Junxion Center (our new building) and was a basic, sweet ceremony that was beautiful and simple at the same time.  Mario led the vow exchange, even though the couple, Simon and Ana had been traditionally married in 1989.  Since their recent "reconnection" to Christianity and a church community, Simon asked Mario if he could perform a marriage ceremony "under God".  No labola; no traditional hoops to jump through....just a simple wedding at the end of church.  Mario agreed happily.


Cynthia, Ana's friend (and home group leader) asked me after church a few Sundays later if I would mind helping them find a dress for Ana.  Like most couples in Diepsloot, Simon and Ana struggled to make ends meet and needed help with even basic needs of a wedding.  Because we are the sole "white people" (there is no word or understanding of the term "Hispanic")  at The Junction Diepsloot, I am usually approached for help with ideas and connections.


I suggested borrowing a dress from a slim recent bride at Junction Dainfern, but also suggested we begin to pray for help for the wedding.  God (who knows Ana) would see the need and be the help we all needed.


Within two weeks we were flying out of Johannesburg for a six week trip to Mongolia, China and the States.  At one point (Cynthia told me) Ana asked if we were gone for good.  While I was in Tempe, Arizona with my sister-in-law, Shirley, garage sale shopping, I came upon a few wedding dresses for sale.  The prices were outrageous ($700 for a $3400 new wedding dress is a steal...but not exactly a garage sale item).


At a small sale near Shirley's house, we came upon a few wedding dresses, which seemed more reasonably priced.  The lady, an African-American woman  was selling the smallest one (Ana is a size 0-3) for $120.  I gasped.  It was a beautiful dress, and the most reasonably priced one we had seen that day,  but in my purse was eight dollars...an insult and an impossibility.


As I chatted to the lady (who was quite friendly) I asked why she had so many dresses.  It turned out her daughter had them (she collected them from sales like these) and she was now selling them to raise money for college.  I told her Ana's story, and how I was part of a team praying for a dress.  The lady was visibly moved - a Christian (and especially moved about Ana in the township), her heart went out to Ana. She asked me how much I had to spend, and I showed her my last money: a five and three ones.  "Just take it," she said, at the verge of tears.  "Take it and tell her that she is doing the right thing getting married under God."


But..the dress was huge.  We had to stuff it in our already bulging suitcases to make it home.  We did.


At the wedding, Ana wore the dress (which fit her like a glove) and also a veil Lindiwe (our mutual friend) made for her.  She glowed.  I had made the wedding cake (a two day process) and cupcakes for the kids and all the flowers for the wedding party.


As expected, the service yesterday was not the main story.  Before the wedding, the cake had to be set up, the bride had to be picked up, the whole cake dropped off at the hall.  Nothing went according to plan, and most of the time, I found what I had arranged to happen...didn't.


In any case, the wedding was wonderful.  The vow exchange at the Junxion Center was where Mario was brilliant and Ana spoke up and Simon was hilarious, kissing his bride twice.  Afterwards we all headed to Diepsloot for the reception.

The reception, as everyone knows, is where the real party starts.  The hall (which was dirty and unswept in the morning) had been set up now, under the supervision of Mrs Sibonyani, a local pastor's wife famous for hosting events.  The head table was beautiful, and we all gasped as we came in.

Here is where the cultures divide.  Here is the tradition exposure.

In Diepsloot, things are famous for running late.  The reception began one hour after we arrived.  The food was half-way through preparation, there were no drinks (even water) offered upon arrival, and in the heat of November I felt it.  I finished my water bottle at the main service and now was getting parched.

Still, by the time we began, the worship team sang in spirited voices, the dancing started and soon, the procession of the wedding party began...the families were jumping up and whooping at the entrance.   There were women dressed in "traditionals" heavier than my own I was wearing, dancing and singing and showing no sign of stopping.  I have to admit, my perspective had changed.

Soon, there were speeches by family (graciously translated into English) that were moving; there was worship and praise and dancing.  Mario delivered a salvation message that made me cry.  Dumisani drove it home as the MC and was amazing and eloquent.  All the while, songs and dancing were interspersed....the program, though long, was incredible and full of joy.

Still, I felt strange.  I had been part of planning this wedding as much as anyone, but I felt disconnected.  My urges to "hurry the program along" were not heard.  My suggestions for serving food earlier were smiled politely at, but no one listened.  No one offered us a copy of the program; water or a tray of snacks.   No one said it out loud, but all I "heard" was "This is how we do it in Diepsloot."

Explaining to Mario my concerns, he smiled (while he danced) and said "Babe, this is their wedding. You are not in control."  He was right... and I decided to "enjoy myself" like he was.

I took pictures of the celebrating, most of the time smiling and dancing.  I joined in the circles (women dancing and men dancing).  The crowd was mostly people who were familiar from church, but many family members who I had never met.

At some point I felt like an outsider; like someone who wasn't invited.  It dawned on me that as much as I joined the dance circles, I could never be part of the "inner circle" of Diepsloot.  All the talk of being one body... I was a foreigner.  Not because I was American, but because I wasn't Pedi; Zulu; Seotho... someone who was a daughter of Africa-- this wild and untamed place where everyone had a place...and knew it.

I felt  more and more strange, and soon I was crushed and just wanted to go home.  Was this a revelation, or did I just have a bad attitude? All things considered, I also realized it was 2:30 and I had not had any water since 12.  I hadn't eaten all day.  I felt faint and dehydrated.

It was then that two new vehicles arrived outside of our party.  Driving them were tutors that were here to pick up our Hlanganani orphans they had volunteered to help prepare for exams (next week).  According to our schedule, the reception should have been  wrapping up right now.  Instead, we had just started.

The local Communist Party arrived to have their meeting and we usually were vacating the hall by 1:30.  Still, they saw it was a wedding, and took their seats outside.  They all were from Diepsloot and were resigned to sharing (even with the Christians) during times like these.

Meanwhile, the kids were either falling asleep or asking for money to guy buy fruit.  One of them made off with my empty water bottle and filled it outside, taking turns passing it around to the other kids who were thirsty.

At one point, I saw another course come out of coolers to be cooked.  It was three o'clock when I realized we were probably not going to eat for another hour.

I surrendered trying to have a good time and told Mario I was leaving.  He agreed it was probably wise (probably thanked God he wouldn't have to tolerate my questions anymore), and said goodbye.  I went out to the car, only to realize I was blocked in by the tutors, who were standing in the back of the hall, watching the dancing.  I asked them to move their vehicles only to let me out...and I left.  Mario was in my rear view mirror, a puzzled look on his face at this new experience: his wife leaving a party before him.

I came home and downed a liter of water.  I filled up another glass and began to drink it.  My dog was dancing at my feet, happy to see me finally home.  I looked out the window at our willow tree, being blown by the same storm winds ushering in  black clouds.

I grabbed an apple and bit hard.  Was I still a foreigner?? Was I important here?? Was I just the lady who got the dress, made the cake and did the flowers??  Am I part of this family?? Who listens to me?? Do I matter?? Am I a woman of influence, or am I just swimming upstream??

Swallowing the first food I had all day, I realized I hadn't chewed properly, and started choking. It wasn't an easy thing to swallow.

Posted by Brazen Princess at 12:24 AM