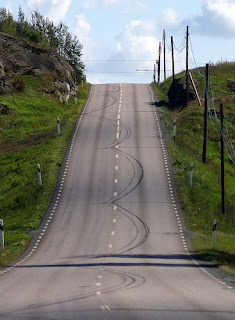 Now that I'm blogging I can no longer hide something, because it's the story.

I have to admit it: I've entered the 94.7 cycle challenge and Sunday I am beginning a race that will cross Joburg from one side to another -- a total of 94.7 kilometers (roughly 59 miles).

Johannesburg is a city of hills, like Sacramento: rolling; gradually inclining.  Sweet in a car but a bitch on a bike...pardon my French.  French I speak fluently as I ascend hills - if I have the breath to speak at all.

For the last five months I've been cycle training.  One day in the winter here I was talking to a friend who just completed a long cycle race, and he dared me to do  94.7 Challenge, Jozi's most popular cycle race.  The race is considered a friendly one, not too harsh, and certainly not a huge feather in a seasoned cyclist's cap.  For me, however, it would be a matter of reacquainting myself with a bike- one with gears- and balance.  It has become a monster of a challenge, and I have to admit that tonight I am not sure I will finish.

I hate not finishing...anything.  I absolutely hate the feeling of giving up, even though I am not an athlete and not competitive.  I do know that I have (as most people have) been raised to finish what I start and "give it my best"; and I've been faithful, my whole athletically-challenged life, to do that.

The problem is this: I have asthma.  I weigh more than I should (usually).  I am 47.   All of these things together mean that the 94.7 Challenge is just that: a challenge.

I've joined some friends (all younger than me) in their training and we will start the race together.  Our name is "Team Toast" so it shows you that they all have a great sense of humor.  Last week I rode with them - for the first time on pavement -  in an area called The Cradle of Humankind.

I barely kept up.

As we were finishing our 30 kilometer ride, one of them said "Yeah, let's go get a drink then do another 30".  I quickly inventoried my stamina and realized I could probably do another 30...but never come close to finishing with all of them.

Since I learned bike basics on a mountain bike, I had only experience riding trails.  The morning of the ride my friend, Jo, deftly removed my worn mountain tires  and replaced them with "slicks", the tires that were meant to carry me through the race itself.  I was sure that since I could navigate rock-ridden mountain trails I could surely brave the smooth paved roads.

I realized, that morning as I rode with Team Toast, that the experience of road riding was much different from Mountain biking.  As I went from one  point to another, all I could think was my bike wasn't right.  It felt heavy and sturdy, not sleek and light like my teammates.  I struggled to find the right gears and method of ascending the hot, paved hills.  It was different.

My sympathetic team mates waited from one point to another for me to catch up.  I stood out as an older lady trying her best to navigate the hills on her old mountain bike.  Yuck.  I hate even admitting that.  As I read it again, I'm embarrassed.  Yuck.

I completely resolved to figure out pavement, and changing gears on the road.  I met my teammates at the cyclists' raceway the following Monday.  I suited up and set up my trusty (albeit heavy) bike.

When I reached for my gloves I realized I forgot my helmet  -- and couldn't ride.

I went the next day (yesterday) and rode alone.  I huffed and puffed up and down the track three measly times, each time committing to get the gear-changing correct next time.  It was exhausting; and much different from mountain biking.

I met Mario afterward and confided in him that I didn't know if I could finish the 94.7.  Tearfully, I explained about the bike, my breathing.  I was running out of wind during crucial uphill times.  My bike was too heavy.  The other cyclists passed me easily as they deftly changed gears.  It was humiliating.

Mario's answer was scary.  "Why not borrow a road bike?  After all, this is a road race."  I shrugged.  I winced.  I died inside.  But I thought about it.

This morning, we called Dave, our seasoned cyclist friend, who gladly offered me the use of his road bike.  We arranged to meet him and pick it up at 2 in the afternoon.

In between the time we called Dave and the time we picked the new bike up... I got the wind knocked out of me.  I was confronted by a friend who brought to light some incredibly bad attributes of mine.  He even added that others noticed this about me: other friends. It was the worst possible time for me to feel so wounded... and I struggled to not take it personally.

The whole thing was personal and I racked my brain out to figure out when I had offended so many with my careless, clueless, large personality.

By the time we collected the bike, Mario and I had fallen into a stunned silence, processing what was said and maybe what was imagined.

As Dave took the bike out of storage, I smiled.  There was the sleek, light  road bike that could be mine for the day of the race.  All I would have to do is test it out at the raceway tonight to see if I could change the gears and negotiate those paved, unyielding hills.

Who was I kidding?  I couldn't ride tonight.  I could barely walk.  I was consumed in sadness that can only be described as the familiar ghost: What am I doing here?? Should I go back home??

I could be clueless and controlling there, but I'd be closer to my family.  Closer to Mexican food.

Tonight... click click click.  I type and I mourn for the loss of this day. It is a hard thing to feel like giving up.  I hate it, but it's a reality.  I don't fear my emotions; I'm not governed by them.  I just wish they weren't so loud.

Posted by Brazen Princess at 1:31 PM