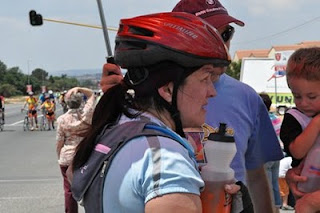 In the movie The Princess Bride a character named Indigo sword fights a man in a black mask, who will later be revealed as the hero, Wesley.  As they progress through the battle, Indigo is thrilled that someone can match his skill in sword fighting, and says so. At one point he asks the man in black for his identity.  When the man refuses, Indigo presses further, "I must know," he says.  The masked man in black says, flatly, "Get used to disappointment." Indigo, a seasoned and artistic sword fighter shrugs and says, "Okay."

Get used to disappointment.  What terrible, horrible and real advice to anyone striving to be great.

Tonight I am disappointed.  How can I get used to it??

Yesterday, I began the 94.7 Cycle Challenge, touted as Joburg's hardest race, with great enthusiasm. Five and a half hours later, in the at 2:45 in the hottest day yet this year, Mario rescued me from a grueling and hot sun and a myriad of problems to take me home, unable to finish what I started.  The ride home I tried to explain, in tears, what had gone wrong along the way.  Mario was sympathetic, but mostly proud of me, a sentiment I couldn't embrace.  He was also worried.  I was sun-stroked, tearful and urinating blood...and slaughtered by the idea of defeat.

The start of the day was early, beginning at Matt and Jo's (my unofficial race coaches) for breakfast at 6:00 a.m.  Jo's mom, Sandi, welcomed us and we all were energetically anticipating the finish...the end of this day.  After scrambled eggs on toast, we met the rest of our team at a prime location with minimal parking.  We posed for pictures and soon were on our way to the starting line... ready to begin the race at 9:25.

The team had all trained for this day, but I was a mother among a lot of youngsters.  Matt (in the middle) was dressed in a cycling costume of Spider-Man -- the rest of us had the required padded-seat bike shorts, the obligatory helmets ("No Helmet-No Ride" is the race's mantra) and assorted energy sachets, sports drinks and other carb-loaded delights.

When we started, the adrenalin was pumping.  I felt confident and strong, and when we reached the M5 (a local freeway closed for cycling that day) the team began to pull away from me...at least all but Matt, my faithful trainer.  Matt stayed next to me the whole race: as my chain froze in downtown Jozi; as I fell at a water station, as I approached the half-way point, thinking that we wouldn't make our scheduled finish time; and as I walked my bike up Witkoppen, the long and endless climb shortly after our half-way point.  The whole time, Matt could have broken away and achieved a respectable finish time.  Instead, he chose to ride alongside of me...my first race in South Africa.  My first race without my husband.  My first race I couldn't finish.

Mario and I met Matt and Jo because they got married in Junction.  Mario performed the ceremony, after getting to know them during pre-marital counseling sessions.  A friendship was struck, and we've remained pretty close ever since, having a mutual admiration for one another.  Matt and Jo were accomplished riders, and encouraged me to participate in the race, all the while making it easy to enjoy the training process.

Last week, however, was awful for Jo, unfortunately finding her racked with fever on the couch.  It prevented her from racing on Sunday - so she and her mom became the  "pit crew" for all of us, Team Toast.  She dangled a mid-race rendezvous, like a carrot, in front of us, complete with the promise of sandwiches and cold water.  We would meet her at the corner of Witkoppen and Hyperion -- nearly the top of the monster hill ... where I began to cry.

Matt, trying to encourage me as I dismounted my bike and began to walk it up the hill, said, "The next light is Hyperion.  They'll be there to meet us.  Get on your bike and we'll ride to meet them."  He encouraged with everything he had...even tempting me with braai rolls, the promised sandwich of choice.  I shouted back "I'm never eating again as ling as I live!"  My weight, a hindrance for perfection during my normal life, was a stand-out hurdle during a cycle race.

As soon as we reached our cheerleading team, I saw them all.  My friends Terry and Manny with their son, Calvin, joining Sandi and Jo, looking so enthusiastic and encouraging, cheering as we approached.

I barely made it to them.

While they were cheering, their faces changed when they saw me.  Matt and I dismounted our bikes, and as Matt went for the braai rolls, I broke into hysterical sobs, begging Jo to fix my bike, it's unyielding chain that kept me from switching into low gears.  I fell into Terri's arms, who handed Calvin off to his dad.  They all looked sympathetic, but were unable to help, being unprpared for a bike emergency beyond a flat tire.  Jo asked real questions, like "CAN you go on?"; "Are you drinking enough?"'  At one point she handed me her cell phone, with Mario on the other end.

Mario's voice was recognizable above the din of encouragers'.  Up the road about 2 kilometers, Mario was parked, waiting to cheer me on.  I answered in mono-syllables, trying to stay out of any area that would lead me to tears... or the emotional plea to rescue me from the heat, the grueling course, the pain of getting here...fifty five kilometers (34 miles) of hills and scorching roads.    With the encouragement of friends (and some persistent strangers), I mounted my bike and began again.

I persevered through a few more kilometers before I saw Mario... his face like a lion, his arms outstretched in triumph to the sky, and without a word cheered me through my self-pity as I made the turn onto another freeway, closed for the race.  Road closures are done for only a specified time, and I knew, as I pedaled along, that the roads were not going to remain closed for long.  The clock was ticking, and I secretly did math in my head of how long I would have to safely finish this race.

It didn't look good... and as I was realistic, I chastised myself for negative thinking.

Before long, I approached a freeway overpass where I saw a crowd of supporters, and then Jo...who yelled "GO JANET!!!"  I smiled and waved... knowing that it was all gravy from here on in.  At the Hyperion Rendezvous, I wasn't sure I could go on.  In a nanosecond, I heard Mario yell at the top of his lungs: "GO JANET!!!"  It was tearful, encouraging, and it was at my back.... as I began to climb another hill.  I waved, then got on with it.

Soon the whole thing became like an old spaghetti western, with cactus and Mexican men with sombreros watching me as I trudged along under a scorching sun.  I was sure Clint Eastwood was pancoed and watching me with a rifle slung over his shoulder and a cigarette hanging from his mouth.

Where was Matt?  I forgot to look for him at the last turn.  He was most likely waiting for me at the top of some hill... and now I was irresponsibly alone in the middle of  the N14 freeway, riding without a chaperone.   I stopped at a water station to refill my camel pack.  The volunteers looked worried as they filled my assorted bottles, and even asked "Are you okay?"   I nodded, then went to the toilets, the blue porta-potties that are familiar to any road race.  It was there that I felt the pain of pissing blood... dehydration.

Enough was enough, and I left the water and toilet station to meet the road again, all the while looking for Matt.  At the top of the next hill, I surveyed the scene.  Matt was nowhere to be found, and probably looking for me.  I took off my camel pack and called Mario, the only number I could see without glasses.  When he answered his first question was "Where are you??  Matt is looking for you."

I told him (in messy, pathetic tears) that I thought I was done.  He told me he would call Matt and tell him to go on without me... and that he would be waiting at the next overpass...the entrance to Diepsloot.  Could I make it there?  I looked into the distance.  I saw two overpasses, both on the downhill.

I pulled up to him a few minutes later, where I tried to hug him, but he brought me into the shade as he helped me off the bike.

Then he hugged me.  I broke hard, crying hysterically and nearly fainting at the same time.  I asked him how far it was to the finish.  He told me it was sixteen kilometers, but they weren't easy ones - they were mostly uphill and it would be hard to get there before the roads opened again.   I agreed (as he hugged me) that it would be best for me to stop.

It wasn't for about five minutes that I realized we were in the midst of a refugee camp of shade...everywhere were fellow cyclists with their bikes.  They were either resting or giving up...like me.  While Mario went to get the car,  I surveyed the scene.  It was heartbreaking.  These folks had trained (like I had) and spent money on shoes, shorts, water receptacles and helmets   to end this day here, in the shade sixteen kilometers from the finish line.   One of the girls I recognized from a few k's back - watching her husband (or boyfriend) be loaded into an ambulance before mounting her bike and beginning again.  At the time, I wondered if he had fallen, or if it were a case of heat stroke.

By the time I got into the car, I was committed to my choice, never once questioning it.  Even now, as I type, I don't question my choice to stop.  I did my best.  I did eighty kilometers on a bike that was borrowed four days before the race, in a borrowed helmet, rooted on my my great friends, and my incredible husband.

Still, I am deeply disappointed. I didn't enter a race only to give up.  I know I'll know more for next year, but I am disappointed.

I remembered Indigo as I hung out the laundry today (that's right, I did my laundry today!) as he was brilliant in sword-fighting and still was defeated by a masked man.  He came back, in the story, and accomplished what he wanted...so will I.