When I was growing up, sometimes I would complain about how little we had.  I was convinced I was one of the most deprived children on the planet, going without regular soft serve cones from the Snow White or Cocoa Pebbles on our breakfast table.  Having four other siblings, sometimes we would commiserate together, loud enough for my mother to hear.

“You think we’re poor?” she’d say, when she’d heard enough.  “Get in the car, I’ll show you poor.”  We knew better than to speak, then.  We obediently got into our station wagon and drove to the “other side of town” – the part where only the migrant families lived.  There, we saw small homes, mostly constructed of cinderblocks, some with windows that had been cracked and held in place with masking tape.  Children played outside, sometimes, in raggedy clothes.  After a few views, my mom would say “How would you like to live here?”  Silence from her children, who were so boisterous only a half-hour before.  Sometimes I cried going home, thinking of how selfish I was.  My mom had a way of making us shift our eyes and focus on what really mattered.

“How would you like to live there?” My mom never knew how much the words haunted me.  It encouraged me to shut my mouth about my perceived hardships and look outside of myself.  The thoughts haunted me my whole life, and haunt me still.

Our friend, Paul Jennings is a business man who decided to start a program called Paradigm Shift last year.  Modelled after the concepts similar to Grameen Bank in Bangladesh, Paul saw an opportunity to do more than just provide blankets and food parcels to families who were struggling in the nearby township of Diepsloot: he would be part of reshaping the way they saw money.

Grameen Bank, founded by   Muhammad Yunus, enabled millions of Bangladesh citizens, almost all women, to buy everything from cows to cell phones in order to start and run their own businesses. Most of these women had nothing, as in only a few possessions, so could never qualify for loans at conventional banks.  He saw something extraordinary: if the women were of noble character, and promised to pay back a small loan, they usually did.  He taught them how to budget, brand and run companies without any previous business experience.  It was a relatively new concept when it started, called  micro-credit.   The success of Grameen Bank with their microloans and microcredit has inspired similar projects, like Paradigm Shift, around the world.

Yesterday, in front of our church, Paul stood and announced the first graduating class of Paradigm Shift Business School.  They stood; wearing caps and gowns, and sang to us, in celebration of their accomplishment.

The class of seventeen students had just completed the Entrepreneur Survey Training course, which included training in branding, pricing, record-keeping, advertising and budgeting.  The training was done by other business owners and entrepreneurs in our church.  Normal people who had begun their own businesses would come home from work and spend Monday evenings at the Junxion Center, pouring themselves into these folks, so that they could start their own businesses and succeed.

The thought warms me: until yesterday I never knew how many were involved.  After church, Paul and his wife, Margie, hosted a party that celebrated the start of these businesses.  Grown men and women, in caps and gowns, were all smiles, declaring that the course was already changing their lives. 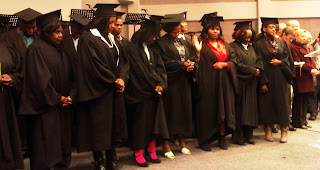 If you can imagine a thousand dollars changing generations...   it breaks the imagination.  For a poor person in South Africa to borrow money (even eight thousand rand) is impossible from financial institutions.  To lend, banks need to make sure you are not a financial risk.  This involves collateral that the poor don’t have, but are desperately trying to get.   It is the private programs, like Paradigm Shift that are providing the opportunity to those with nothing to change the outcome of their lives.  It involves mentoring and training and commitment from busy business owners to break the cycle of poverty.  It is too exhausting to do, without God.

Around here, the poor are much more poor than those kids on the other side of town.  Here a widow and her child have real possibilities of starving.  This is why programs like Paradigm Shift are doing more than “helping the poor”.  They are helping generations of people overcome the cycles of poverty.

Paradigm Shift is one of the reasons I am happy to be here and part of a church that realizes that our social responsibility goes hand in hand with our spiritual responsibility for this world.
Posted by Brazen Princess at 7:44 AM