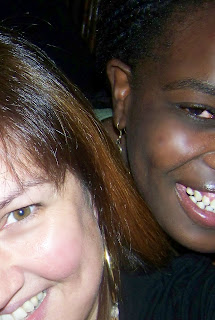 Jenny kissed me when we met,
Jumping from the chair she sat in.
Time, you thief! who love to get
Sweets into your list, put that in.
Say I'm weary, say I'm sad;
Say that health and wealth have missed me;
Say I'm growing old, but add-
Jenny kissed me!

Leigh Hunt wrote the poem “Jenny Kissed Me”, read to me aloud by my freshman English teacher who had to wipe away a tear when he was finished.  The reading had a profound effect on me and I wasn’t sure why.  Maybe because Jenny was so special that she bestowed on Mr. Hunt the blessing that only she could have: a kiss of acceptance in a cold world.

I woke up this morning and stared at the ceiling fan, a four-paddle affair that was in the shape of a cross.

Two days ago I found out that Monica died.  I have been out of focus since.  I feel disjointed... running from one harried activity to anther just to fill the space in my heart that can’t believe this.  Monica was in her thirties, leaving behind two kids under ten years old.  She was getting better.  What will Dumisani do?  What will their church do?

What will I do? 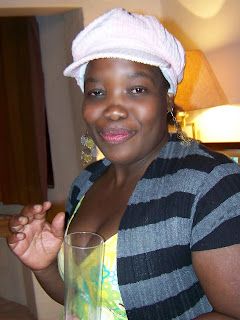 Monica, after all, was special.

She was a blessing. A delightful, funny, cheeky, brave, complicated friend.

When I came to South Africa, Monica accepted me.  Even though she was at first a little wary of me –new to this continent and full of reckless zeal to build Christ’s church any way I was allowed to.   Soon enough, though, I made her laugh and she relaxed into comfortable acceptance of who I was.

She wore large bright earrings and had the most beautiful smile.  She talked in a deep voice and walked with a confident swagger that made you know she knew who she was.

One morning, as she walked toward the church in a flawless white dress, I snapped a z and said “Giiiirrrl!! You look smokin hot!”  She smiled, shyly.

I was  quickly corrected by a (very caring) friend who over heard me and took me aside.

“You don’t know this, since you’re new,” my friend said.  “But ‘girl’ means that she is your permanent live-in servant.  It’s a little derogatory here.”  Things are so complicated because of the Apartheid hangover...

She could tell by my reaction that I was shocked.

I went back to Monica, explaining the differences in our cultures – after all, “GIIIIIIRL!” was a greeting given to Gail by Oprah.  Given to your bestie when you were being playful.  Monica giggled as I explained nervously.

She was married to Dumisani - a tall, statuesque guy that had the command of a room as soon as he walked in.  We were fast friends.

“Timna means ‘ours,’” Dumi said, holding his baby daughter in his arms the first time we went out to lunch.  “It is a name we chose especially for this one.”  He looked at Monica who smiled back at him.  I was transfixed on them.  Their eyes sparkled at one another, very un-African like!  I loved the way they related to one another, as equals and as friends and romantic partners.

Dumi and Monica became sounding boards for us as far as the culture went.  They were a Xhosa couple, living in Diepsloot.  It surprised me, simply because Dumi seemed highly educated and greatly respected by the community.

One day, after taking them home, they invited us in for tea.  There was a bed and a an area used to prepare food in a small room that they called their home.  They were the first Diepsloot family that ever invited us into their space. It was a high honor.

“Why do you live here in Diepsloot?” I asked, maybe a little too boldly for the first time I was in their house.

“We have no choice,” Dumi answered honestly.  A teacher, Dumisani was just short of his master’s credential, leaving his employment opportunities less than what he could make a decent living on.

“Where we are from,” Monica said, answering the deeper question.  “There is the ocean right outside and our families all live nearby, but there is no work.”

The thought saddened me.  Still, as I got to know them better I was encouraged with the way that neither of them seemed bitter about it – and not defined by their address.  Instead, they reached out to their neighbors, bringing the gospel to the desperately poor - people who put our faith to shame.

One night, our church had a celebration where all the different home groups were asked to host a table of ethnic food, prepare a dance or presentation to perform and dress in ethnic clothing.  While our home group became Mexican for the evening, Dumi and Monica’s became Xhosa.

Monica was dressed beautifully, but when it came time for her dance, she broke free into a very bold dance and song that made everyone stop what they were doing and watch her.  She sang powerfully and loud. Her motions and movement were much like the Hawaiians when they did the hula, but imagine the hula with more power and determination.  Shortly afterward, the electricity went out, and we all went home.  We made a joke that Monica was so smokin' hot that she short-circuited the power.

We hung out a lot.  We worked side by side, especially in the Diepsloot community. Everytime she saw me she said, "Hey, Giiiiirrrl!!"

Jo called me right after I made dinner on Thursday, and gave me the news.  Jo (short for Joanna) employs Monica’s sister, Apilele, and heard from her that Monica had succumbed to a short illness that had come at her hard and fast.  She had gone to the Eastern Cape the Tuesday before, yearning to be with her mother and her family there.  She checked into hospital and said she was feeling better the last time I talked with her (on Monday).  Now, I type this, less than a week later and have seen and felt the devastation that losing Monica has brought.

Dumi (finally in a profession he loves) was interrupted Thursday night as he was teaching to meet Mario, his sister and his brother and me in the school courtyard to be told that his partner and friend had gone to heaven.  His sister delivered the news to him, and he broke into sobs that were loud and heart breaking... I couldn’t look at him.  I buried my face in my poncho and thought of their children, her sisters, her mother....all of her friends.

This morning I woke up thinking of her.

I was drawn to the image of the cross above me, the rock I have shelter in.  Jesus’death and resurrection makes so many things possible, but most of all, it assures me of the eternal life that we will share.

I know I’ll see her again.

Still, the death is damn unfair.  It is a waste of a bright, warm woman who wasn’t afraid of life.  She glowed with excitement about the smallest of things.  She laughed with her whole body and loved with no boundaries.  She was a mother to orphans, to anyone who came in her front door.  The last detail seems so insignificant: she was my friend.

It hurts to lose her.  It hurts to have death invade a life lived so out loud.

Monica thrilled me when we met,
Dancing Xhosa and singing along.
Death, you thief! You came and stole her-
Tore her from unfinished song.
Say she’s taken, say she’s gone;
Say her family will weep and gather;
Say our hearts will break, but add-
Monica lives – and you don’t have her!

Posted by Brazen Princess at 2:25 AM