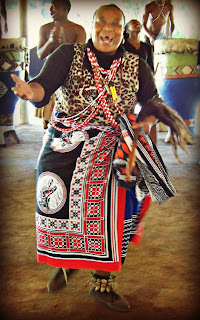 The day that little Alekwa died Chila brought in water from outside to pour her a bath.  She had heard that the water would chase away the fever, and it was the only thing she hadn’t tried.

“There is no need for bathing,” her mother said.  “She was bathed yesterday morning and has not urinated or produced the bowel movement.”  Mama looked sternly into her young daughter’s vacant eyes.  “Chila, do you hear me?”

“Yes, Mama,” Chila said, filling the stainless steel tub. The baby tub had been a gift from a neighbor before the baby was born; a second-hand one that was perfect for a child.  In the township, the babies came fast and someone was always needing things for them.  Chila considered herself lucky to have this one.

“And the water is not heated,” mama said, when she realized what she was doing.  “Even the white doctors say you should heat the water.”  There was no use speaking to Chila.  Mama could see that her worry had stopped up her ears.

Mama shook her head as she watched her daughter, slowly filling the tub with the water from the 25 liter bucket.  In all of her years helping the young mothers deliver their babies and nurse them afterward, she knew the look of death.  This shameless death would not go away with water.  This morning, death had silently entered their dwelling, a tin shed, and sat with them there now, as if he had come for tea.  There was nothing to be done, and it was sucking out the hope inside of Chila.  Here was her daughter, making a tub for death and the baby to get in together.

“Mama, let me do this,” Chila was stirring the oil in the water.  “Alekwa is like fire when I touch her.”

“Fire should not be put in cold water.  At least let us heat it, my child.”

“Yes mama,” and Chila sat back on the bed to cradle Alekwa again.  Chila looked into her baby’s face, swollen with fever; her little eyes closed.

The hospital had let the baby come home, and the nurses told Chila that the child would continue to recover with the powders.  Instead, shortly after arriving home, Alekwa vomited the powders over and over again and the fever began to rage.

Last night Chila had called for her mother, who brought the ancient herbs and mixed them dutifully as she had done for a thousand babies.

A thousand babies who were not her granddaughter.

Chila was convinced it was her mother’s grief about the fever that made the herbs be undigested as well.  As the night went on, she crawled reluctantly in to bed.  The taxis would not run until the morning, and there was no one with a car that would take her back to the government hospital.

No doctor would come.

Mama also laid beside Chila and Alekwa, and they all didn’t sleep together.

Dogs barked from outside; the men came home from the shebeens, stumbling into doors that partially welcomed them.  Fights.  Music.  Radios.  Dwelllings were so close together that every sound could be heard.

Chila was filled with sorrow.  Her neighbors had come to earlier in the evening to pray, but they all saw the same thing: the thing that Chila was refusing to see.  The child was not getting better.

Mama got out of bed and welcomed the early sun with a song:
Avulekile Amasango!
Ay, Ay, Ay
Ay, Ay, Ay
Yo ho, Amen!

“Mama,” Chila whispered.  “Don’t begin to sing.  There is still warmth in her body.”

Mama stopped singing, and saw in her daughter a dizziness that came with sleeplessness.  “When did you last sleep, child?”

“Yes, my daughter, the time for song is now.  The child can still hear.  We must sing together.” Perhaps the baby would choose not to go to heaven.  Perhaps the song would break the fever.  Perhaps her daughter may praise God, no matter what.

“Mama,” and Chila cradled the child, and wept again.

Mama stared at both of them for most of the morning, and she did not sing, even to herself.  It was her daughter’s shack and she must respect her daughter here.  It wasn’t until and Chila went outside and came back with water that Mama had said anything.

Now Chila was back on the bed, cradling the baby and not weeping.  There were no more tears left to weep, and even Chila could see death finishing his cup of tea at the table.  Mama stirred the hot water on the paraffin stove and when a song came up in her, she swallowed it back down.

“Now you can bring her,” Mama said.  Chila stood up, and Mama looked up at her daughter, just as the tiny arm dropped lifelessly from her bundle.

Chila stared at her kneeling mother, and the tears came again, for both of them.  They lay Alekwa in the tub anyway, and she floated like a puffy little ball, brown and perfect.

Chila looked at Mama as they screamed the dirge, choking with sobs and emotion that finally came to recognize that death had actually taken little Alekwa.

Soon the neighbors would hear them and they would come to sing as well.

Chila wrapped the clean, lifeless body in a towel and dressed her in the white Sunday dress for the trip to the morgue.

Mama rose to fetch more water; there would be a need for more water for tea.

"Avulekile Amasango" is a Zulu song meaning "The gates of heaven have opened and there is an exchange between heaven and earth." It is sung at weddings, funerals, graduations... in celebration and in grief. It is a beautiful song. Click here to see the Soweto Gospel Choir sing it live.

Posted by Brazen Princess at 10:41 PM