My story of immigration is not about me coming to America – it is about me leaving America.

There can’t be an entry without an exit (in the realm of immigration) and that seems to be the greatest lesson I’ve learned in this area.

To me, immigrants were sickly, thin people making their way from the old country on a ship and being processed on Ellis Island.  Quarantined for typhus or pneumonia or the flu.  I never thought the term would apply to me, an American girl, formerly content to stay in her home country near her family. 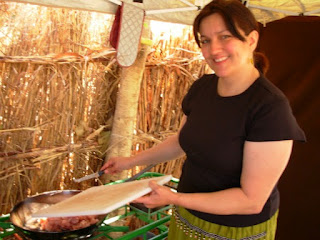 It wasn’t until I visited Africa that I realized that my life and my future dreams were seriously altered.  It was in a Malawian village, sitting on a ground filled with ants, surrounded by village children, that I realized I was born for this.  I was trained from the day I was born until that day to get my American butt off its comfortable chair and give myself to the work that everyone here was doing.

When we came to South Africa, it was because of Oliver Tambo.  Not the man, the airport.  Our friends, a  team of Christian missionaries (they’d kill me if they saw me use those words...but it is the best way I can make people understand what we do) invited us to be permanent part of the work they were doing into Africa.  The airport was the hub to get everywhere – in the South of Johannesburg.   Their invitation came after several trips we took in and out of Africa; and it made sense.

It was already in our hearts.

Let that be the first part of my immigration story.  The second part is that once we decided to come, we were introduced to the un-welcome mat of a government bureaucracy that had taken on a stance that they loved visitors, but were careful with immigrants.

The bureaucracy I am speaking of is the one that is responsible for processing all applications for residency, simply called “Home Affairs”.  It sounds like such a friendly place, doesn't it?  It even has the word "home" in it.  We were first welcomed as “Temporary Residents” once we submitted a ream of paperwork : chest x-rays (to prove we didn’t have active tb), blood tests (to prove we didn’t have HIV/AIDS, tb, or all the strains of hepititus) and inoculations (against yellow fever, tb and all the strains of hepititus).  This we had to do before we were welcomed as TEMPORARY residents into South Africa, with a visa that lasted four years.  After staying for three years (without getting paid by any agency here or at home) we had to declare whether we would be going home or staying – if the latter, we would have to apply for PERMANENT residency. 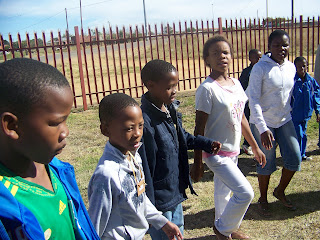 Once we had permanent residency, we would be able to collect an income (a small one, but it would help to supplement  Mario’s retirement), get a bank checking account and obtain an I.D. number (similar to a social security number).  The desire to become permanent residents fought with the desire to go back home....

On one hand, we were doing our life’s work in a country we loved and felt “planted in”; on the other hand, we had four kids, five grandchildren and siblings and parents in the States.  Ministry vs. Family.   Ask any foreign missionary and they will tell you that family is the greatest pull back home.

Even more than Mexican food.

We  had to follow the whole application process all over again, complete with an interview.  We submitted the same paperwork twice in Pretoria and Johannesburg and it was refused at the counter.  Why?  Our American doctors signed off health checks on 8”x10” paper, rather than A5 (a slightly skinnier and taller piece of paper which is standard here).

We submitted a package again in Bloemfontein (in the Free State – 4 hours away, but with greater efficiency in their employees) and found that our fingerprints had been returned by the F.B.I. as “unreadable”.  The man who took them in Johannesburg had smudged my thumb.  We had to re-submit, and I yearned for a digital fingerprint machine, just like the one we had back home....

By the time our second round of fingerprints came back from the F.B.I., our medical exams had expired by one week.  Another denial of paperwork.

We had our South African doctors do the exams and the x-rays again (all at our own expense) and made ourselves ready for another trip to Bloemfontein.

We were greeted by friendlier people, but still steeped in the same bureaucracy that was there for our first three applications.  We had to wait in line for three hours until someone took pity on us.

I was seething by the time we got our interview.

“Is this the way you treat applicants?” I wanted to say.  Mario threatened me not to say anything.  He’s usually right about these things.

“So tell me,” the man (who drew the short straw to be our interviewer) said. “Why did you not apply in Johannesburg?”

“We did,” Mario said.  “They gave us an interview date three months away.”

“Ah,” he said.  “Yes, they are busy there.”  He leafed through all of our paperwork, held up our x-rays to the light.  “Ah, Janet has some scary lungs!”

My heart stopped, and I looked at him.

“I am joking!” he said, bursting into laughter.  “We don’t need these x-rays, just the report!”  He put the x-ray back into its sleeve, after giggling some more.

I looked at Mario, who was politely laughing with him.  Mario has a way of knowing what makes people feel respected.  I thought the guy was taking some poor guy’s job who had lost it just for being white.

I do not love South Africa’s government.  The once strong, powerful and longsuffering ANC (African National Congress) is now an inefficient entity plagued by corruption.

When Nelson Mandela became president in 1994, the ANC was strong.  Everyone expected a drastic change in the country; his most zealous supporters admitted that they wanted him to somehow avenge the deaths of all of the fallen soldiers who had fought against the evil Apartheid system  by firing every white person in government positions.   He was expected to replace the all-white cabinet with his cronies (all capable people).  Instead, he built a transition government where people kept their jobs regardless of their skin color.  It somehow encouraged competency in all areas, even though the transition was understandably rough.

As things progressed, the presidency was handed over to Thabo Mbeki and eventually our new president, Jacob Zuma.  Black Economic Empowerment is a standard for hiring in all government positions now.  It is very similar to America’s Affirmative Action of the 1970’s and ‘80’s (a moral initiative to redress the wrongs of the past), but it is designed to help the majority of the people, rather than the minority.  It was created to bring the black majority into the economic mainstream, specifically government jobs.

While a noble idea, BEE is not a pragmatic one.  It does no one any favors and makes the inside of South Africa crippled by a different kind of inequality and injustice.  Practically speaking, it means that simple processes, like immigration, become unnecessarily expensive and nearly too frustrating to complete.
So, we were given permanent residency, almost two years after we first applied.  We had to renew our temporary residency before we received it, since it would have expired while our applications were being considered for review...and we would have been here illegally then.

I love South Africa.  I love its people, its sights, its sounds and its dysfunctional family (there are 11 National languages here).   I feel called to be here, working alongside my beautiful husband, where we do work that is service-oriented, but we have been given grace to do.  For some reason, the people here love us back...and we have made a home here.

Now, when I meet an immigrant, I have a different kind of empathy for them.  They have left behind their home, not just moved here from nowhere.  They have left families, comfort foods, weather, music, and their culture.

On the 4th of July, I’ll be freezing my butt off in my new adopted homeland... and missing my family.

Posted by Brazen Princess at 6:02 AM