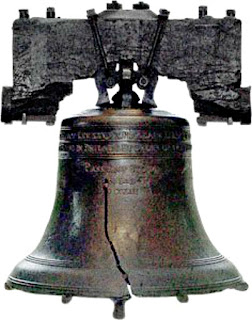 The Liberty Bell’s Inscription:
Proclaim LIBERTY throughout all the Land unto all the Inhabitants thereof
Lev. XXV X
By Order of the ASSEMBLY of the Province of PENSYLVANIA [sic] for the State House in Philada
Pass and Stow
Philada
MDCCLIII (1753)

Fourth of July is an American birthright.  It was inherited by we Americans who have been fortunate enough to sing the victory of our founding fathers’ brave decision to declare us as a free nation in the face of a powerful sovereign.

It is in the peak of summer that we celebrate the original Declaration of Independence being finished and signed by a few of those founding fathers.  It is there, with bar-b-ques and pools and cold drinks that we celebrate, later watching fireworks that remind us of the wars that were fought for our independence.

It was a gutsy move back then... thirteen colonies and their leaders (then at war with Great Britain) signing a formal document that said they regarded themselves as independent states, and no longer British Colonies.  It was as if they were saying that regardless of the outcome of the war, the states were independent.

It was high treason.

After Congress approved the final wording of the Declaration on July 4, a handwritten copy was sent a few blocks away to the printing shop of John Dunlap. Through the night Dunlap and his two man staff printed about 200 (a small feat in those days) for distribution.

Four days after it was signed, the Declaration of Independence was taken to be read publically to all American citizens.

In Philadelphia, a man named  John Nixon read it out loud (mainly because of the quality of his voice)  in the yard of Independence Hall on July 8 (not the fourth).  Although Philadelphia is the most renowned reading, other public readings also took place on that day in Trenton, New Jersey, and Easton, Pennsylvania.

Bells were rung to announce the reading of the document and to summon the town to come.  The most famous of which, called the Liberty Bell,  still hangs (cracked) at Independence Hall.

The truth about the Liberty Bell is that it was not made (or rung) correctly.  The bell itself was cracked the day that it arrived in Philadelphia, and was twice recast by local workmen John Pass and John Stow, who signed it for all the world to see.  But that day, as on all days since, the Liberty Bell was rung regardless of its defects, to call all citizens to come and hear...our version of liberty.

I love the story of the Liberty Bell.  It shows that here, on earth, there is no such thing as perfect liberty.  Perfect liberty exists when freedom reigns without any contradictions.  The founding fathers owned slaves, denied women (and the poor) the right to vote, and regarded children as property.  Their version of liberty was that they be free from tyrannical reign.

Still, their leadership inspired a reaction that fueled Americans to win an un-winnable war against the best-equipped army in the world at the time.

After hearing the Declaration, crowds in many cities tore down and destroyed signs or statues representing British reign or royalty. An equestrian statue of King George in New York City was pulled down and the lead used to make musket balls.

That’s the way we roll.

Happy Fourth of July.
Posted by Brazen Princess at 2:25 AM