From KFC I phoned Vince to tell him I arrived in the metropolis of Bloomfield, the largest city I had seen since Albuquerque.
"Oh, good!" he said, "I'll be there in a few minutes."
I waited, knowing better than to get my camera out to take pictures of our reunion.  Vince hates pictures.  He also hates looking like a tourist.  He struggles with my desire to catch every moment of significance on film.
It wasn't long before I heard the low, powerful purr of his exhaust system.  His silver Honda Civic, amped up with all kinds of goodies (young people today say "pimped out", but I can't get used to the description), was turning the corner into the parking lot.  I saw him, with Riki beside him, and got tears in my eyes.  For effect, Vince revved his engine, and raised his eyebrows at me, cigarette dangling from his mouth.  It snapped me out of it  - this was my grown son, not my baby.
Still, it was awesome to see him, and I hugged him, thanking him for awesome directions and supervision.  He admired my rental car, like I cared, while I greeted Riki Jo, his girlfriend.
We drove to his place, where I met his friends that I had only seen on facebook.  They were awesome, welcoming.  Vince said "This is the McGlassons.  They're my oldest friends in New Mexico."  They both objected at the same time .  "Hey," Nikki said, "We're not old!! We've just known you a long time!"  It was hilarious.  Since Vince moved to New Mexico from Sacramento, his work had mainly consisted of working the oil fields that I had just passed coming here.  Recently, he became part of the oil company's metal shop, and though he enjoyed the work, he did miss family.  Friendships become incredibly important when you are so separated from family.


I finally saw Vince's room from the doorway.  "Here it is!" I said, referring to the backdrop of most of our SKYPE phone calls.  The Chinese flag, a Nelson Mandella backdrop, the headboard of the bed, and the computer which was (strangely) against a wall - the porthole to seeing my son over the airwaves.  For some reason, it seemed smaller, and I never had seen the biggest thing in the room.
"Whoa! Look at your flat screen!" I looked at the mammoth screen that dominated the wall opposite the bed.
"Yeah, that's an HDTV," he said.  A must for any gamer or movie aficionado that Vince was. I laughed.
"Have you told Riki about your deprived childhood?"  I joked.  Our kids were raised by us having one TV with rabbit ears antennae, and a very solid movie collection where we introduced them to fine film (all of them have impeccable taste).  While all of their friends grew up with Nintendo and X-Box, it was a banned entity in our home.  Their adult lives, now, are all filled with fine tech equipment from stereos, to X-boxes and laptops.   All of them are experts and tech-heads now.  We should have banned mathematics.
We decided to check in to my hotel and have Mexican food.  My first night was spent catching up with them over a plate of green chile rellenos (New Mexico is famous for the picante bite of a green chile sauce).  Great salsa, great chips, great conversation, sitting across from them and chatting over a sparkling purple Margarita.  I should have ordered the red sauce and the plain lime Margarita...other than that, the night was perfect.
The next day we visited Durango, Colorado, a neighboring town in the neighboring state of Colorado.
"As soon as you get to Colorado, the terrain changes," Vince told me.  It was true, Colorado became green and gorgeous with the Animas river (a challenge white-water river) coming in and out of the roadway view.
We soon got to Durango, and decided to walk the streets of Old Town, which was like any American Old Town experience: a western-flavored streets filled with charming shops and great places to eat.  In its streets we walked and chatted more, shopping less than talking.  The city was a distraction for visiting.
It was a blast, walking around.  Even the garbage bins reminded me of the stark contrast between America and South Africa. 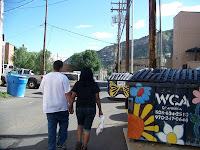 The following day, Vince and Rikki adopted a kitten named Eddy (their beloved Blue Russian, Fred, had gone missing two and a half weeks before).  It was an interesting process, and seeing their affinity for cats reminded me of all of the ones we owned in the past. 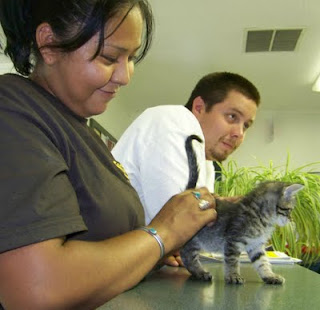 Eddy (a kitten and a sibling of three others available for adoption) cried all the way home, even though Riki soothed him the best way she could.  He adapted quickly, but we could tell he had been dehydrated in the kennel by the way he was reacting to food and water.  The new addition to Vince and Riki's life mant that our time together would have to be spent where they stayed, only venturing out a couple of times, once to go to a local fair and later to have dinner.
It meant a lot to be part of their day-to-day lives, so full of "ordinary-ness" that I am not a part of, being so far away.  I felt like the time flew by, and when it was time to say goodbye, Vince comforted me (in the blazing heat of his front yard) as I teared up yet again at another goodbye. Three days in a year is not enough to see my son.
That day, I drove to Albuquerque, bought an extra carry-on and repacked my (heavy) bags.   I returned my rental car the next day, and flew to San Francisco to board my flight home to Johannesburg.  That brings us to the first blog of this series called "Travel".
It's been hard to say what the whole trip was like.  I have to focus on God and the calling He has for us.  His promises to take care of the next generation and my "kids" are promises that I hang on to.  I trust Him in an active, bleeding, dying way...unfamiliar to me in this lifetime.
Posted by Brazen Princess at 12:21 AM