"Mondays child is fair of face...."
That's what the poem says.

Alannah came on Monday, finally, after waiting the last two months in a painful position.  Born 32 minutes after Alicia started pushing, she weighed NINE pounds and five ounces... and was 21 inches long.  After so long of a wait, she was here!!...and oh, so beautiful.  Oh, so fair of face!!

A week before, sitting in the doctor's rooms, I sympathized with both mother (being a mother of a two-year-old and in pain and physical agony) and dad (working hard and being a father - seeing Alicia in pain and physical agony)﻿.  Seriously, they both had had a long and stressful time this particular pregnancy and were ready to deliver.  The day that the doctor decided to wait one more week for the inducement (or induction, if you prefer) he was unable to get a proper measurement of Alannah's head because she was so far down.  "She's right up against you, Alicia," he said, pressing the sonogram wand into her tummy.  "You're probably really uncomfortable."

Alicia liked her doctor, and trusted him.  Before we entered his office, she told me to be quiet when we were in the room with him.  So I did.  Barely.  When I told him the new date for inducing Alannah's birth was only one day before I was scheduled to leave, he shrugged and said "I'm really doing this for the health of the mother and the baby, I can't work around your travel schedule."

Whoa, did I just get smacked??  My daughter, a type one diabetic, was about to endure one more week carrying her large baby low, while in pain and discomfort.  Her first daughter got caught in the birth canal and was born not breathing....  Was he actually insinuating that I was only thinking of myself?

Even so, I promised I'd keep my mouth shut, and I did.

After the visit, we made our way to the Lange house.  Brian's mom, Suzanne, had the same reaction I did  about the doctor's decision to hold off inducing.  In a strange way, it comforted me, as if I had an ally.  Nevertheless, Brian and Alicia were accepting the news, so we all rallied around them as best as we could.

Alannah Litney would be the baby's name.  Alannah, after the friend who was one of Alicia's friends now (she introduced Brian and Alicia) and Litney after our beloved Litney Fowler, killed in a car accident a week after we arrived in South Africa.  Litney and Alicia were childhood friends, always laughing with one another.  I still remember her as alive... and the baby's birth would be proof that she would live on. 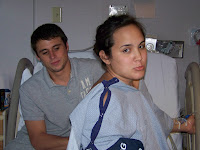 Monday, August 8th, finally came, and Alicia, still in tremendous pain would go in to hospital bravely to be induced.  The drug they use to do is delivered through an I.V., and is called Pitocin.  It induces labor at a rapid rate, causing the cervix to dilate at a faster rate, making labor more painful and sharper.  (As an added trivia, Alicia was induced via Pitocin 23 years ago)

A few hours into the painful process, Alicia called a nurse and asked for something to ease her discomfort. I still remember the shot into ease her pain, put straight into the I.V., and instantly seeing Alicia...for the first time since I got there.

She relaxed; laughed; joked.  It was incredible.  Since she was feeling better, I asked if I could now take pictures.  She laughed and said yes. 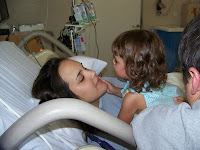 Throughout the rest of labor, Alicia was a trooper.  Brian, the baby's father, rubbed her back and offered the obvious comfort of being next to her through it all.   Alannah (the friend they would name the baby after) was there as well.   It was my first time to meet her, and I found her adorable, and full of love.

It was obvious when Harmony came to "visit" with Nana Suzanne that "Auntie Alannah"  was already part of the family.

After hours of labor, Alicia transitioned and gave birth to Alannah, the beautiful, fat, screaming bundle that came naturally.  It was 9:21 p.m.  Her voice was so like her own mother's at delivery!!  While Mario watched via SKYPE, she was born and was measured.   "Oh MY GOODNESS!!!" Did she just come out of you?? :)) 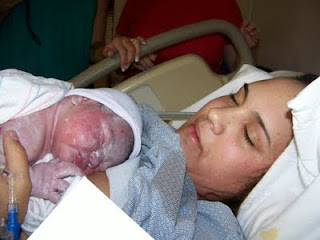 And while it all happened, the nurses futzed int the background, calling for blood and vital signs.  It was then, amidst the flurry of happiness that I realized Alicia had lost too much blood.  She lay, crying and asking for pain meds on the gurney, as the doctors and nurses ignored the flashes of photographs to tend to the mother.

While the rest of the family focused on beautiful baby Alannah, my heart turned toward my own baby and began to stroke her arm and hip, as she lay on her side.  Even though she was in pain, my heart was determined to take care of her.  Her vitals were low, the nurses said that a transfusion would be ordered.

To describe what came next is embarrassing.  I asked Brian to get everyone out of the room.  Alicia decided that meant me, too.  We all left for the waiting room, where most of the family chatted about the little, cherubic new addition, all of them familiar with each other.  I was the only representative of "my family", and I felt outnumbered and alone.  I so wanted Mario.  I wanted to be with my baby, or at least know what was going on.  I walked up to the delivery room, where Brian was standing above the scale that would weigh Alannah. 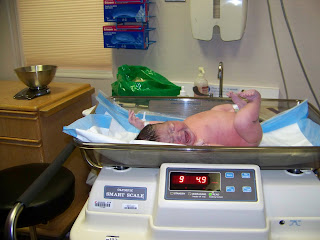 "Do you have your camera?" he asked, coolly (Brian is a cool customer).

I nodded and exited.  I made my way to the waiting room, collected my things and came back.  I took a picture of Alannah being weighed (holy cow!! 9 pounds, 5 ounces!) and then made my way over to Alicia who was in the fetal position on the bed.   I stroked her side, and she felt cold.  Where was the doctor??

Little by little the family walked in (I objected, but Alicia corrected me).  They took pictures of the new cutie pie and Brian soothed Alicia.  There was no room for me there, so I left.

In about an hour, seeing that I could do nothing more\, I made a decision to leave with Harmony.  It was then I realized I didn't have a car (I had walked to the hospital).  Suzanne and Steve (Brian's mom and step-dad) offered to take me home.  I accepted.  It was Suzanne who took me in her car.

Not before her mother, Nancy, prayed for me.  It was then I broke down in sappy, big, fat tears.  I wanted to be inside with my own baby!! I was supposed to leve tomorrow, and would have to say goodbye to Harmony, to Alicia, and to Alannah... tomorrow.  I couldn't believe it.  I knew that God had called us to South Africa, but had He called us to this??  I wept into Nancy''s shoulders as she encouraged me, assured me that God was in the details.  I agreed and parted with Harmony and Suzanne.

I couldn't stop thinking of Alicia, my only daughter, the one who just had to have an induced labor; the one who might have to have a blood transfusion; the one who would now have two (not one) with a partner who was working and no one to stay with her after I left...tomorrow!!!  I was a little bit on the hovering side:   "Get out of here, Bud's with me!" she teased as I left.  I felt as if I had surrendered my right to be concerned, to fret, to be a mommie.

When we got home to Brian and Alicia's apartment,  I offered Harmony her favorite: "Apple JUICE??" I said, playfully.

"Bed?" Harmony said, pointing toward her bedroom door.   Harmony's normal bedtime was around eight-thirty each night I was there. It was now well beyond that.   I laid her in her crib with clean pyjamas and a fresh diaper, and she laid quickly, clutching her blanket next to her.  I watched her for awhile, only to tear up more, knowing that it was my last night with her for awhile.

As she lay sleeping, I cried in the living room, grieving for who I would be soon saying goodbye to: my only daughter, Harmony and Alannah, the new addition. Brian had been so hospitable and assured me all would be okay....  My concern went beyond reason and comfort.

Harmony and I awoke the next morning refreshed and rested, but it was ten in the morning!!!  I fed her quickly, bathed her and walked to the hospital with her in her stroller.

It was there we found the "new" parents with baby Alannah, so pink and beautiful.  It was there that we all held her.The nurses told me that Alicia had not needed a transfusion after all, being high enough in platelet count to spare the added trauma.  I was elated.

Meanwhile, Harmony played with her little sister, while "Aunt Claudia" cooed over her, taking picures and giving my camera (and hers) a workout.

In two hours I had a mega-visit, then had to say goodbye.  I had to say a goodbye that would have to last until Christmas.   I finally left, saying a goodbye that wasn't planned or emotionally rehearsed.  The last thing Alicia said to me was "Don't worry, mom, December isn't that far away."  It only pulled at my heart-strings more.  Determined not to cry in front of her, I rode back to the car with Suzanne and Harmony, saying a quick goodbye to both, as my mom called to see where I was.

I told my mom I was on my way to her house (I was running late) and I would be there before dark (Tracy is 3 1/2 hours away from Chico).  After I hung up, I realized I had just cut off my mother, said  sloppy goodbyes to Harmony, Alicia, Brian, Alannah and Suzanne.  Goodbyes are not easy for me, so I usually mess them up.   I soon collapsed into a globby mess of tears as I headed to Tracy, back to my mom and dad's.

To end this story, I can tell you one thing: leaving family is no different for a "missionary" than it is for anyone else.  It is a faith-filled thing, where trusting God is active and excruciating at the same time.

Still, I have to rejoice in a healthy birth, a beautiful baby and the chance to be called "Gamma" all over again.  This time by a gorgeous little angel named Alannah.