My sister, Shari, is the most organized person I know.  She has four children with different schedules and interests, and still manages to stay on top of things.  This is why it was surprising that, on the day I was supposed to see Vince for the first time in ten months, she was taking me to the wrong airport.

"Shari, you know we're going to the Oakland airport, not the San Francisco airport, right??"  I asked my sister after we had crossed the San Mateo bridge.

"NO, you're not!!" she said, answering my question.

Actually the over-organized gene is in all of the Ryan girls.  Since Shari had her oldest's birthday party the same day as the party at my parents house, she offered to take me to the airport the next morning.  This would kill two birds with one stone: a visit with her African-American sister, and helping the family by transporting me to the airport.

I had been navigating from a map she downloaded from the internet, visiting and talking at the same time with her and her kids, listening to all of their life interests and twists and turns.  This was the more important of the two things I was doing, I thought, until I realized  that we were going to San Francisco.

After a few frantic phone calls and stopping in a mall parking lot to ask directions (a guy at the ATM pretended not to speak English until I answered him in Spanish and rephrased my question), she delivered me (on time) to Oakland International where I checked my overweight luggage curbside by skycaps who gave me grace because of my story.

The plane ride to New Mexico was short (two hours) and I lost myself in a new novel to ward off emotional overload.  I finally arrived in Albuquerque, to pick up a rental car so that I could drive three hours to the "four corners" where I would meet Vince. 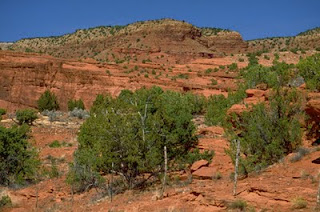 The "budget" rental cars were all gone and they gave me a free upgrade and I drove the most incredible car for three hours through the most incredible terrain where I called Vince to tell him I was on the 505 North headed to where he lived.  He sounded surprised.

"Oh, then I guess you don't need directions," he said, sounding just like Mario.  "Call me when you get to Cuba," he said.

Cuba, New Mexico is half-way between Albuquerque and Farmington, near where Vince stays.  When he first moved to Farmington, he told me it was near the "four corners", which I had to look up.  New Mexico, Arizona, Colorado and Utah all meet in "squared-boundaries" to form a reference point that connotes a great wild area, suitable for oil mining and filming Star Wars.  The day I drove, there was a rainstorm, whose clouds streaked from heaven to earth in purple, dramatic fashion.

When I reached Cuba, I called Vince again.  By the time he answered I was leaving Cuba.  It was that small.

"What does your gas tank look like?" he said.

"From now until Bloomfield," which is where he stays, "you're in oil country. Call me when you see the Giant gas station."

He wasn't kidding.  A stretch of gorgeous land, committed to oil rigs and refineries was the last leg of my journey.  It was still amazing... and it reminded me of the Free State in South Africa, for some reason.

I had Christian radio, for the first time in years, and I loved it, avoiding the really religious stuff.  Getting there is half the journey, and that is why the post is this way.

I loved all of my travel, and I realized it was because I could engage my mind on the next goal ahead.  I once heard someone say that if you wanted to get to know someone, take a road trip with them.  Lose your luggage with them.  Be somewhere new with them.  I did this relatively alone, but I could see that the journey took my mind off of the aching loss of leaving California, my parents, my siblings, their kids, Alicia, her new baby...and Harmony.

It wasn't long before I would get where I was supposed to be going.   I chose to enjoy the drive.

Posted by Brazen Princess at 9:06 PM